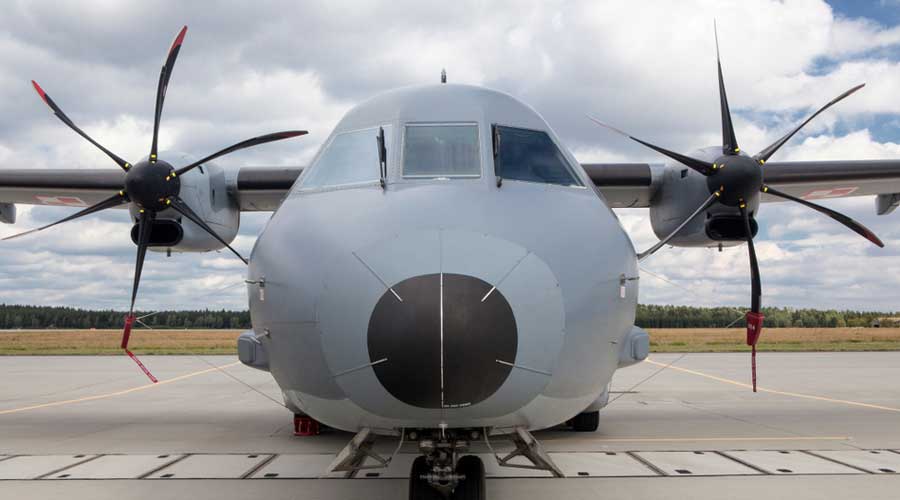 While the C-295s are meant to replace the Avro-748 transport planes, the new aircraft will also be suitable for demanding roles that the AN-32 currently undertakes. The aircraft can operate from short, unprepared airstrips and carry out a variety of missions in all-weather conditions.
File picture
Our Bureau, Agencies   |   New Delhi   |   Published 08.09.21, 10:09 PM

The deal is expected to be worth $2.5 billion.

Airbus Defence and Space and Tata Advanced Systems Limited (TASL) will jointly execute the project to equip the air force with the new transport aircraft under the Make-in-India initiative in the aerospace sector. Airbus will supply the first 16 aircraft in flyaway condition while the remaining 40 will be assembled in India by TASL.

The Avro replacement project was in the works for almost a decade.

While the C-295s are meant to replace the Avro-748 transport planes, the new aircraft will also be suitable for demanding roles that the AN-32 currently undertakes. The aircraft can operate from short, unprepared airstrips and carry out a variety of missions in all-weather conditions.

“We have made good progress with the light combat aircraft and a variety of helicopters. But transport aircraft is one area where a lot needs to be done. The C-295 project will help create an ecosystem for building transport aircraft in India,” said Air Marshal Anil Chopra (retd), director general, Centre for Air Power Studies.

The defence acquisition council accorded its acceptance of necessity (AoN) to replace the Avro planes with 56 new aircraft in 2012. Under India’s defence procurement rules, AoN by the council is the first step towards buying military hardware. The Avro-748 entered service in the early 1960s and has been long due for replacement.

“All 56 aircraft will be installed with indigenous electronic warfare suite. The project will give a boost to aerospace ecosystem in India wherein several MSMEs spread over the country will be involved in manufacturing parts of the aircraft,” the statement said.

The programme will allow the Indian private sector to enter into the technology intensive and highly competitive aviation industry and will augment domestic aviation manufacturing resulting in reduced imports and expected increase in exports, it said.

“The programme will act as a catalyst in employment generation and is expected to generate 600 highly skilled jobs directly, over 3,000 indirect jobs and an additional 3,000 medium skill employment opportunities…It will involve development of specialised infrastructure in the form of hangars, buildings, aprons and taxiway,” it said.

The project will involve setting up servicing facilities for the C-295 in India. “It is expected that this facility will act as a regional MRO (maintenance, repair and overhaul) hub for various variants of C-295 aircraft,” it added.

The contract will also have an offset clause. India’s offset policy stipulates that in all big-ticket capital purchases, the foreign vendor has to invest at least 30% of the value of the purchase in the country to boost indigenous capabilities.