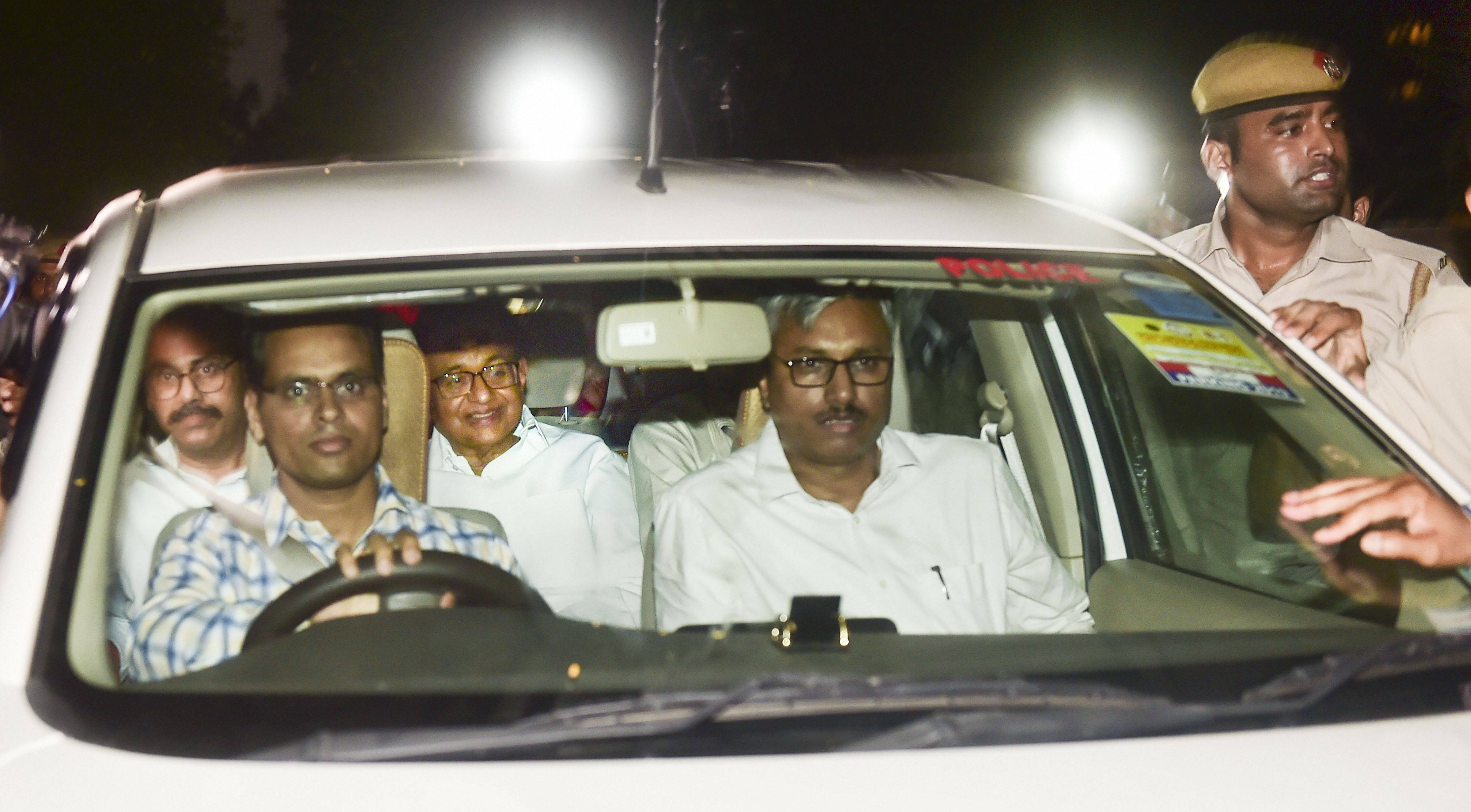 Congress leader P. Chidambaram was on Wednesday night arrested by the CBI at his posh Jor Bagh residence where some officers scaled walls to gain entry, hours after the former Union finance minister failed to get reprieve in the INX Media case from the Supreme Court.

Chidambaram has been arrested, a top CBI official said.

Shortly after Chidambaram, 73, made an appearance at the AICC headquarters and addressed a news conference to profess his innocence, the Congress leader was picked up by CBI sleuths an hour after he reached his residence and taken to the nearby headquarters of the agency for questioning.

As the apex court decided to hear only on Friday Chidambaram's petition seeking a stay on a Delhi High Court order that dismissed his anticipatory bail plea on Tuesday, the CBI and the Enforcement Directorate (ED) got a free hand to arrest him.

The CBI and the ED earlier in the day had issued a look-out circular to prevent any attempt by him to leave the country.

But Chidambaram's appearance in public on Wednesday night to address a news conference after the CBI and the ED said his whereabouts were unknown set off speculation about his arrest.

Chidambaram, accused of money laundering and of getting kickbacks in the INX Media case, asked probe agencies to 'respect' the law and wait until Friday when the Supreme Court hears his bail plea.

He also put up a strong defence of himself and his family, saying none of them has been accused of any offence by the probe agencies.

Chidambaram, flanked by top Congress lawyers, said there was no chargesheet filed by either the CBI or the ED before a competent court and the FIR recorded by the CBI does not impute him of any wrongdoing.

'Yet there is a widespread impression that grave offences have been committed and that my son and I have committed the offences. Nothing can be further from the truth. These are lies spread by pathological liars,' he said, adding that he was granted interim protection from arrest by the high court.

He said he was working with his lawyers through last night, preparing his papers for his bail application. 'Until Friday and beyond, let's hope the lamp of liberty will shine bright and illuminate the whole country,' he said, suggesting that the probe agencies should not arrest him until the apex court decides on his bail plea. 'I will respect law even if applied with an unequal hand by probe agencies,' he said, reading out from a written statement and flanked by several senior party leaders. He did not take any questions from journalists and left the venue after reading his statement.

Chidambaram's son Karti described the CBI action against his father as a drama enacted by probe agencies to simply sensationalise and satisfy the 'voyeuristic pleasure' of some. 'It's politically motivated and a witch-hunt,' Karti told reporters in Chennai.

At Chidambaram's bungalow, a team of CBI officers scaled the boundary wall of his home to gain entrance while another team tried to make way through the backdoor.

On his trail were CBI and ED officials. A CBI team reached House number 115-A within minutes of his return.

With a big media contingent beaming live images of the developments, the CBI team first knocked the gates to gain entry but finding no response, they scaled the nearly five-foot-high walls.

Three officers reached inside and opened the gates to allow other team members in. Soon a team of officers, identifying themselves as from the ED, arrived at the scene.

Another small team of officials rushed to the backdoor to secure all entry and exit points of the bungalow.

A team of about two dozen officials was present at the bungalow with Chidambaram inside with Sibal and Singhvi.

As the action against Chidambaram triggered a political slugfest between the Congress and the BJP, the troubles for the 73-year-old Congress leader mounted with official sources saying that the ED's money laundering probe against him had been widened.

The ED, sources said, had come across evidence where alleged illegal deposits of over Rs 300 crore were made in a single shell firm after purported kickbacks were received by Chidambaram and Karti in lieu of granting illegal Foreign Investment Promotion Board (FIPB) and Foreign Direct Investment (FDI) approvals, the sources claimed.

The agency, sources said, hence has been seeking court clearance allowing custodial interrogation of the father-son duo, given the nature of these complex transactions and kickback deals which have cross-border ramifications, as teams from the CBI and the ED continued their efforts to locate the Congress leader.

A host of Congress leaders expressed solidarity with Chidambaram. Rahul Gandhi accused the government of playing the politics of character assassination while Priyanka Gandhi alleged he is being 'hunted down'.

The BJP rejected the Congress' charge of vendetta levelled against the Centre, saying the Union government did not interfere in the investigation and he must face consequences for his deeds.