Even Kovind looked a little surprised by the slogan-shouting 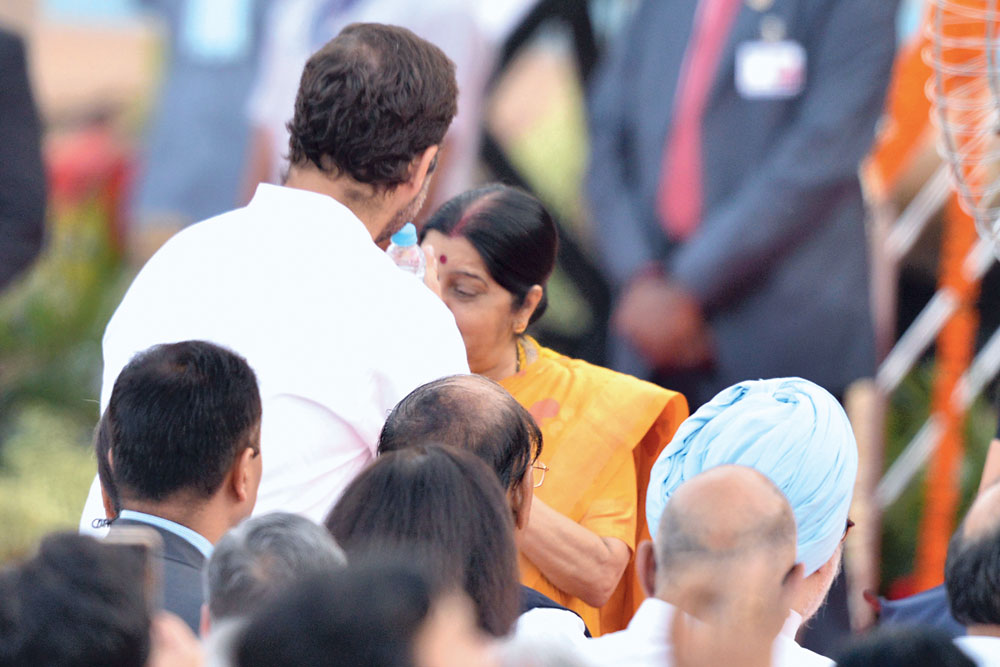 Narendra Modi was sworn in as Prime Minister on Thursday evening at the head of a 57-strong council of ministers that represented continuity with change at an otherwise protocol-driven event designed this time to strike awe and reminiscent of the BJP’s scale of victory.

As twilight set in on the national capital, Modi was sworn in by President Ram Nath Kovind on the forecourt of the sprawling Rashtrapati Bhavan in front of a 6,000-plus gathering that could not be stopped — by protocol and the regal setting — from shouting pro-Modi slogans and chanting “Bharat Mata ki Jai”, to the visible surprise of the presidential staff.

Even Kovind looked a little surprised by the slogan-shouting that was restricted to Modi’s swearing-in, although BJP president Amit Shah and Amethi MP Smriti Irani also got a loud and long round of applause, as did Balasore MP Pratap Chandra Sarangi.

There was the occasional “Har Har Mahadev”, “Jai Shri Ram” and even “Bol So Nihal”, but none of them appeared to carry as far as the President to distract him.

The spirit of continuity with change was evident not just in the mix of old and new faces but also in the suspense that held till the designated hour.

It was only when those designated to take the oath of office and secrecy walked up the dais and took their respective places — marked out by name tags — that there was clarity on who had made it and who had been dropped.

The biggest surprise drop was that of outgoing foreign minister Sushma Swaraj, who arrived a few minutes before the ceremony was to commence and took her place in the audience.

Maneka Gandhi, another cabinet minister in the outgoing government who was dropped, did not put in a presence. Neither could her son, Varun, be spotted in the gathering.

Earlier, whatever suspense there was about the inclusion of Shah in the cabinet had been cleared when the BJP’s Gujarat unit chief, Jitu Vaghani, tweeted a congratulatory message a couple of hours before the ceremony.

Then on, the speculation turned to the pecking order in the government. That was settled once Shah went up and sat on the third chair in the front row; leaving one between him and the yet-to-arrive Modi for Rajnath Singh who arrived afterwards.

As the ceremony went on for two full hours, many in the audience — who had braved the afternoon’s 45°C temperature to arrive well ahead of time — trooped out, an option not open to the VVIPs in the front row, including corporate honchos.

Mansukh Mandaviya, a BJP MP from Gujarat, rides a bicycle to the Rashtrapati Bhavan to attend the swearing-in ceremony of Narendra Modi
(PTI)

As of Wednesday evening they were to attend too but could not make it because civil aviation regulator DGCA had closed Delhi airport for special flights at 3.30pm. The two were to fly in from Vijayawada after Jagan’s swearing-in earlier in the day.

All the foreign invitees from the Bimstec regional grouping; the chairman of the Shanghai Cooperation Organisation and the Mauritius Premier were present, apart from heads of missions based in the capital, braving the heat that did not ease even with sundown.

Besides governors, the BJP’s entire state leadership and leaders of allies were in attendance. Even Janata Dal United chief Nitish Kumar and Apna Dal leader Anupriya Patel — whose representatives are not part of the ministry — were present; clearly restricted by the mandate from stretching their sulk too far.

Among the corporates, Mukesh Ambani and family were present as was Ratan Tata. Actors Shahid Kapoor and Kangana Ranaut provided the glamour quotient along with producer-director Karan Johar.

world, apart from a sizable presence of saffron-draped sadhus.

Behind the VVIPs and the VIPs, the BJP’s unknown foot soldiers watched the grand spectacle unfold as Prime Minister Modi took office for the second time with a constitutional version of a “rajyabhishek” to crown his almost winner-takes-it-all victory.