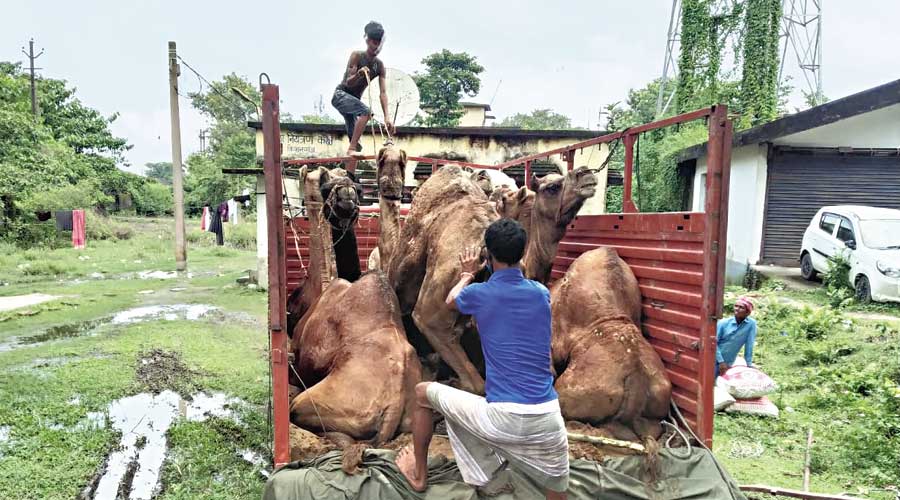 Bihar police have busted an inter-state gang of camel smugglers with international links and seized 23 camels in Kishanganj, around 400km northeast of the state capital. The animals were being allegedly smuggled to Bangladesh.

Six persons — four from Baghpat in Uttar Pradesh and two from North Dinajpur in Bengal — were arrested in the operation conducted on Thursday night.

“We received a tip-off that a truck carrying camels on National Highway 31 was to cross our district. A 3km stretch of the highway passes through Kishanganj before it moves into Bengal. There was no time as the vehicle would take just a few minutes to traverse the 3km stretch. But we managed to intercept it near Rampur checkpost,” said Kishanganj sub-divisional police officer Anwar Javed, who led the operation.

An SUV was escorting the truck and the people travelling in the two vehicles were arrested. The police found seven camels crammed in the truck.

The arrested persons have confessed that they were transporting the camels from Rajasthan to Bangladesh. Their confession led to the seizure of 16 more camels kept in the villages of Khuda and Ambariya, located along the Bihar–Bengal border. However, the people who were looking after the animals fled before the police reached the villages.

“We often keep seizing cattle being smuggled by gangs, but the seizure of camels is a rare one. There is no desert in Bangladesh. These animals were meant for the meat market in the neighbouring country,” Javed told The Telegraph.

The arrested persons have revealed there are 13 more members of their gang in Uttar Pradesh and Bengal. Bihar police have alerted their counterparts in the neighbouring districts about the gang members.

Sources said more technical and manual investigations were going on to ascertain the different aspects of the case, especially how the animals could be taken to Bangladesh despite border fencing and the presence of Border Security Force (BSF).

The distance to the Bangladesh border from Kishanganj is around 22-28km through the “Chicken’s Neck” or Siliguri Corridor in Bengal.

“What is also surprising is that the animals were being transported such a huge distance from Rajasthan unchecked. We are investigating this aspect as well. The mobile phones of the arrested persons have also been seized. We have put the rescued animals in a shelter run by an organisation associated with former Union minister Maneka Gandhi,” Javed said.

Meanwhile, the police team involved in the operation ran into another problem as one of the arrested persons tested positive for coronavirus and was sent to an isolation centre under custody.

A move is afoot to get all the team members tested for the disease.

Police sources said that 10 camels were seized from smugglers in 2015 and another 61 in 2016 in Kishanganj district while being illegally transported from Rajasthan to Bangladesh.

Camels are found mostly in Rajasthan, Gujarat, Haryana and Uttar Pradesh. According to the livestock census results of 2019, there were 2.5 lakh camels in the country, a sharp decline of 35 per cent from the 4 lakh population in 2012.

Rajasthan has enforced the Camel (Prohibition of Slaughter and Regulation on Temporary Migration or Export) Act, 2015, which bans any export of the desert animal for slaughter.