It was an arduous task for rescuers to dig an over 60-feet-deep parallel bit and create a tunnel to reach Rahul Sahu, but neither the rescuers gave up nor the boy lost his patience 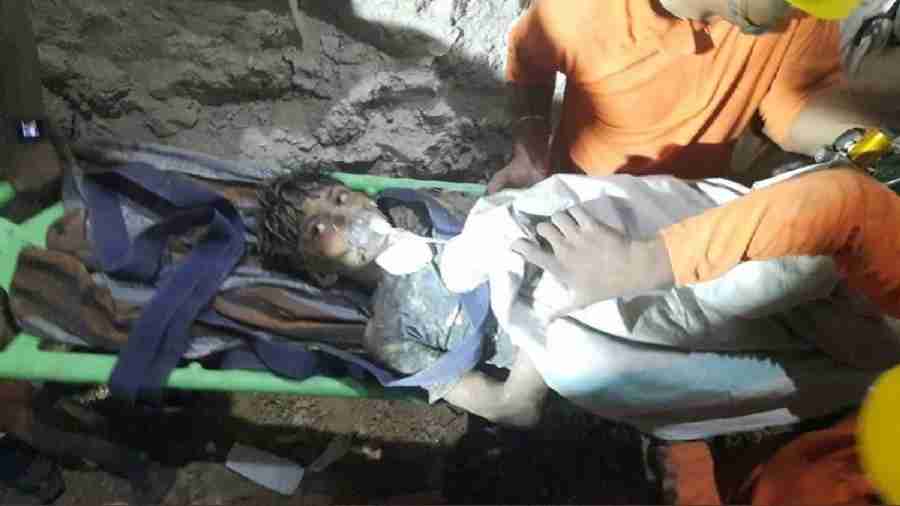 An 11-year-old boy, who fell into a borewell on Friday, was rescued late Tuesday night following multi-agency efforts for over 100 hours. The incident took place in Pihrid village in Malkharoda development block in Chhattisgarh.

It was an arduous task for rescuers to dig an over 60-feet-deep parallel bit and create a tunnel to reach Rahul Sahu, but neither the rescuers gave up nor the boy lost his patience.

In the end, it was a happy moment and a sigh of relief for the boy’s parents, locals and over 500 rescuers.

Television visuals showed Rahul on a stretcher with rescuers carrying it on their shoulders from the mouth of the tunnel to an ambulance stationed nearby.

Rahul was rushed to a hospital by creating a green corridor for about 100km. His condition is stable and he will recover soon, an official from the Jangir-Champa district administration said.

His father Lala Ram Sahu thanked all those involved in the operation and people of the Pihrid village for being with him at such a challenging time.

The boy, who is mentally weak, also showed remarkable patience and did not panic, which gave strength to the rescue teams, a district administration official said.

His father said though Rahul is mentally weak, he has now proved that he is stronger than any other normal child.

The boy fell into the unused 80-feet-deep borewell, located in the backyard of his house, around 2pm last Friday while he was playing there. He was stuck at a depth of around 60-feet below the surface.

After being alerted, the local administration and police swung into action and employed the best resources for the rescue work that began at 4pm on Friday.

Later, a team of the army also joined the rescue efforts and experts from the Southern Eastern Coalfields Limited (SECL) and other establishments were also engaged in the task.

The child was given fluids and fruits through a rope and oxygen was pumped into the borewell via a pipe.

“The presence of hard rocks hampered the pace of construction of the tunnel, that further delayed the rescue process, but ultimately, the joint efforts yielded result and we managed to rescue the child,” said Mahabir Mohanty, the inspector of the NDRF’s 3rd battalion, which was engaged in the rescue work.

“The excavation near the site resulted in water trickling into the borewell. But, the NDRF personnel drained out water with the help of a vessel tied to a rope. The village residents were asked to switch on their borewells to maintain the ground water level. Besides, water was also released from two stop dams in the area to regulate the water level in the borewell,” a district administration official said.

The rescuers dug up a parallel pit, around 65-feet-deep, near the borewell and created a tunnel to reach the child which posed huge difficulties due to under-surface hard rocks and delayed the rescue work, officials said.

After the boy was rescued, Chhattisgarh chief minister Bhupesh Baghel tweeted, “with everyone’s prayers and relentless and dedicated efforts of the rescue team, Rahul Sahu has been evacuated safely. I wish that he recovers completely as soon as possible.”

Bilaspur collector Jitendra Shukla said the boy's condition is stable and he will recover soon.

“He was shifted to the Apollo hospital in neighbouring Bilaspur district in an ambulance under the observation of specialist doctors, for which a green corridor was created for about 100km to facilitate speedy movement,” he said.

The boy’s father, relieved after the rescue operation, said: “My son is a little weak mentally, but he does all the things a normal child does. He rides a bicycle, swims, plays music and games.”

“He is particularly interested in devotional music and whenever ‘bhajan-kirtan’ are held in the village, he spends time there. He is good at playing tabla. Today, he has proved that he is stronger than any other normal child,” the father said.

The borewell was dug by Rahul’s father in the backyard of his house to irrigate his fields, but it was left abandoned when it did not yield much water.

According to Lala Ram Sahu, who runs a small tent works business in the village, a big vessel was placed on the mouth of the pit to cover it.