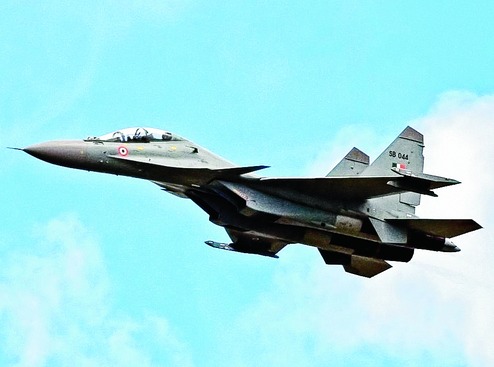 Two helicopters of the Chinese People’s Liberation Army hovered close to the Line of Actual Control in eastern Ladakh on May 5 and Indian Air Force fighter jets had also been airborne at the same time during a face-off between soldiers near the Pangong lake, sources in the army headquarters said on Tuesday.

The latest revelations come at a time there has been an escalation in tension in pockets of the disputed frontier.

“The Indian Air Force is regularly carrying out sorties of its Sukhoi 30 fighter aircraft in the Ladakh sector amid the simmering tension with China in the region. During the face-off last week, two Chinese choppers had come close to the border but there was no air space violation. The IAF’s Sukhoi 30 fighter jets were also airborne at the same time but it was routine flying and not in response to Chinese helicopters,” a source said.

The Indian defence ministry on Tuesday sought to debunk media reports that the Indian fighter jets had been rushed to the border in the Ladakh sector during last week’s face-off. An official said it was an overstatement to say IAF jets were scrambled only after Chinese choppers were seen flying close to Indian territory.

“It was a routine sortie undertaken by the fighter jets,” he said.

The IAF, however, has not officially made any statement on this.

Several Indian and Chinese soldiers were injured in a cross-border clash during which they came to blows and hurled stones at each other on May 5 near the Pangong lake, two-thirds of which is under Chinese control.

In another face-off at the Naku La sector in north Sikkim last Saturday, at least five Indian soldiers and seven Chinese troopers suffered injuries in a confrontation involving fisticuffs and stone throwing by nearly 150 soldiers.

Sources in the Indian Army had said the fracas had taken place as a result of aggressive behaviour. The troops disengaged after a dialogue at the local commander level and soldiers of both countries held up banners advising the other side to vacate the space.

Even in the past there have been numerous face-offs and brawls between soldiers of India and China, but the latest confrontations within a week have again heightened the border tension.

“The two sides officially disengaged after the face-offs but both have rushed additional troops to the two pockets to ensure no further violence takes place,” said an army official.

He said the tension was “simmering after the escalations but it’s not boiling over”.

“Local commanders of both the armies are regularly conducting flag meetings to calm nerves and prevent face-offs between the patrols of their armies,” the official said.

The Indian Army on Tuesday also denied some media reports that confrontation was continuing near the north bank of the Pangong lake.

“There is no continuing face-off at the Pangong lake. There is no build-up of armed troops in the area,” army spokesperson Colonel Aman Anand said.

He said standoffs and aggressive behaviour does take place along the LAC. “Patrols disengage after local-level interaction and dialogue. Temporary and short-duration face-offs occur as the boundary is not resolved,” Anand said.

Sources said there were seven-eight spots along the border in Ladakh where Indian and Chinese troops often faced off.

“The dispute at the border is long-standing and it is because of differences in the perception of the Indo-Sino border and it should be resolved through talks and diplomatic channels. Till that happens, status quo should be maintained by both sides.... The heightened tension and frequent eyeball-to-eyeball face-offs need diplomatic intervention,” an army official said.

Transgressions and border skirmishes are not new along a large part of the 3,488km disputed India-China border along Arunachal Pradesh, Sikkim, Uttarakhand, Himachal Pradesh and Jammu and Kashmir.

In one of the longest confrontations between the two sides, India and Chinese soldiers had been locked in a 73-day standoff at the Doklam plateau in the two countries’ tri-junction with Bhutan in 2017, after the Indian side stopped the building of a road in the disputed area by the Chinese army.