He had asked the party workers to show the door to the govt, which 'failed to protect the Lord's treasury' and said the time has come for a 'double engine govt' in Odisha 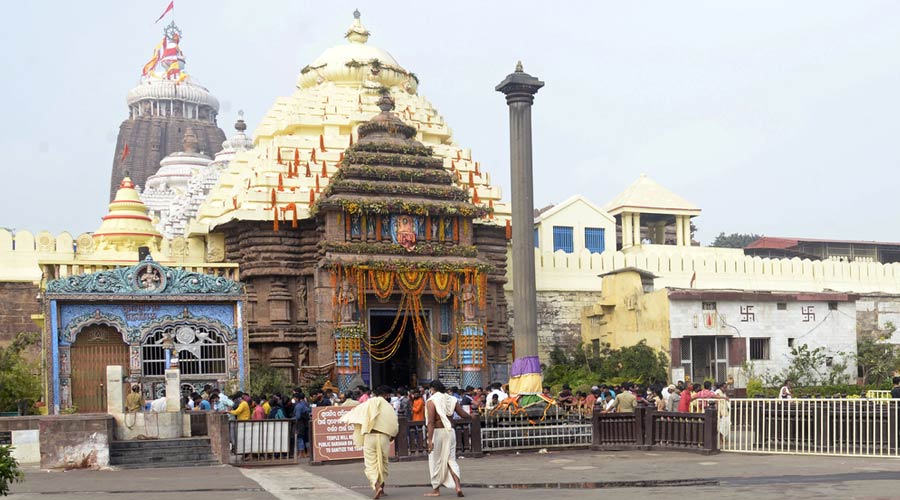 Indicating that the opposition BJP is likely to make the Shree Jagannath Temple Ratna Bhandar' an issue in the next election in Odisha, the saffron party president J P Nadda visited the shrine on Friday and enquired about the location of the deity's treasury.

Nadda, who is on a maiden two-day visit to Odisha since assuming office, asked servitors accompanying him to show him from outside the 'Ratna Bhandar', key to whose inner chamber is reportedly missing.

Nadda had raised the issue of the missing key to the 'Ratna Bhandar', which is expected to hold riches, at a party meeting on Thursday and lambasted the Naveen Patnaik government for it saying that "Even the treasure of Lord Jagannath is not safe in the state".

Some say that the Ratna Bhandar's key is lost and others say officials have the duplicate key. What can people expect under such circumstances? The people can only expect a duplicate key from a duplicate government, he had said.

Nadda had asked the party workers to show the door to the government, which "failed to protect the Lord's treasury" and said the time has come for a "double engine government" (same party dispensation at the Centre and state) in Odisha.

The 'Ratna Bhandar' was last opened in 1984 and the Shree Jagannath Temple Act has provision for its inspection every three years. The state government's attempt to open it in 2018 could not succeed as the key to the inner chamber, which is kept in the district treasury in the custody of the collector, was reportedly missing.

Patnaik had formed a one-man judicial commission headed by a retired Orissa High Court judge to go into it and the then collector had said a few months later that the duplicate key to the inner chamber was found.

The commission's report is yet to be placed in the Assembly, the Leader of Opposition J N Mishra of BJP said.

The mystery over the missing key of the Ratna Bhandar has led people to wonder whether Lord Jagannath's treasury is safe as it has not been opened for 38 long years. The mystery has deepened after a recent statement made by the Odisha Law Minister Jagannath Saraka who said, "Neither you nor I have seen the inside of Ratna Bhandar."

The Archeological Survey of India has in a letter urged the chief administrator of Shree Jagannath Temple Administration (SJTA) to open the inner chamber of the treasury, which contains valuables such as gold, silver, gemstones, diamonds, pearls and other jewels and quantities of silver articles donated by devotees and granted by kings over centuries.

The SJTA had admitted to having received the letter and said that the state government would decide on opening the Ratna Bhandar.

"Nadda Ji asked me where the Lord's Ratna Bhandar is located. I showed him the place from a distance and he folded his hands in respect, his priest Madhu Singhari, who was with him, said.

The BJP president paid obeisance to the sibling deities - Lord Balabhadra, Devi Subhadra and Lord Jagannath and visited the temples of Maa Bimala and Mahalaxmi.

He later went to Tihidi in Bhadrak district where he attended the memorial meeting of late BJP MLA Bishnu Sethi, who died earlier this month.

Before his departure, Nadda is scheduled to inaugurate the rehabilitation annex building at the National Institute of Rehabilitation Training and Research in Cuttack, address members of several morchas of BJP and meet the core team of the Odisha BJP, party sources said.