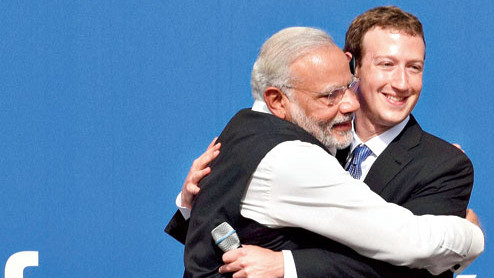 The Congress and BJP, on Sunday. locked heads over an article published in The Wall Street Journal that suggests Facebook has been lenient over allowing hate speeches posted by the ruling party members.

The article further noted that Das “told staff members that punishing violations by politicians from Mr. Modi’s party would damage the company’s business prospects in the country”. Facebook has denied all allegations and said it was still reviewing whether it had to act against Singh.

On Sunday evening, Rahul Gandhi tweeted that the article stands as an expose of the BJP fake news and hate speech propaganda.

They spread fake news and hatred through it and use it to influence the electorate.

Finally, the American media has come out with the truth about Facebook. pic.twitter.com/Y29uCQjSRP

Senior Congress leader Shashi Tharoor tweeted: "The Parliamentary Standing Committee on Information Technology would certainly wish to hear from @Facebook about these reports & what they propose to do about hate-speech in India.”

Senior BJP leader and Union minister for electronics and information technology and communications, Ravi Shankar Prasad, launched a counter attack on Twitter and said that the Congress party had no locus standi to question the BJP.

Losers who cannot influence people even in their own party keep cribbing that the entire world is controlled by BJP & RSS.

You were caught red-handed in alliance with Cambridge Analytica & Facebook to weaponise data before the elections & now have the gall to question us? https://t.co/NloUF2WZVY

“Losers who cannot influence people even in their own party keep cribbing that the entire world is controlled by BJP and RSS. You were caught red-handed in alliance with Cambridge Analytica and Facebook to weaponise data before the elections and now have the gall to question us?” Prasad tweeted.

Cambridge Analytica's website said the company provided its services during the Bihar election in 2010 to a political party in India. The website of the Indian affiliate of Cambridge Analytica, Ovleno Business Intelligence (OBI), mentioned the BJP, Congress and the Janata Dal (United) of Nitish Kumar as clients.