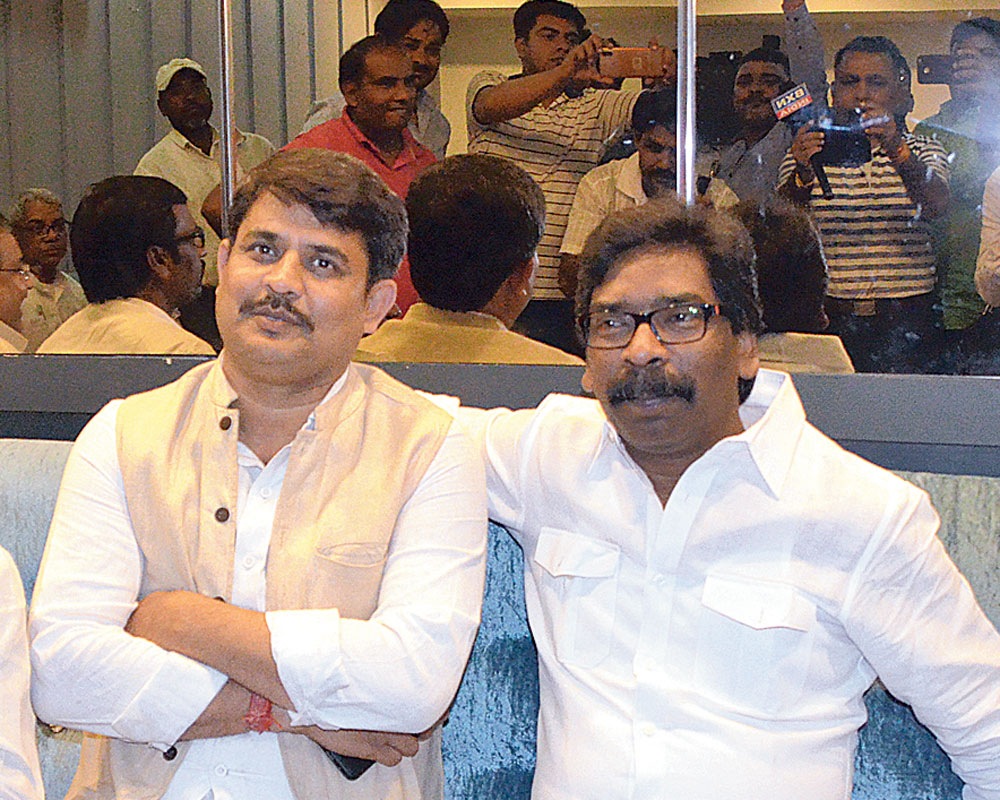 Hemant Soren (right) asserted that the elections will be fought on state issues such as land acquisition and unemployment
Pankaj Singh
PTI   |   New Delhi   |   Published 17.11.19, 08:25 AM

With the BJP facing alliance trouble in Jharkhand ahead of Assembly polls, the JMM-led Opposition coalition's chief ministerial candidate Hemant Soren said on Sunday the allies of the saffron party are deserting the 'sinking ship' as they know which way the wind is blowing.

Soren, a former chief minister and the working president of Jharkhand Mukti Morcha (JMM), accused the BJP of raising emotive issues such as nationalism to divert attention from its 'misrule' and asserted that the elections will be fought on state issues such as land acquisition and unemployment.

'This is not the Lok Sabha election, this is a state election. Central issues dominate in Lok Sabha polls, which have happened and for which the mandate has been given. Now, state elections will be fought on issues of the states.' he told PTI in an interview.

'We can't talk of the Chotanagpur Tenancy and the Santhal Pargana Tenancy Acts in Jammu and Kashmir or in Gujarat. We can't talk of forest rights elsewhere. So if not in state polls, where will state issues be raised? If everywhere nationalism will be talked about, where will the problems of the state be taken up?' Soren asked.

He is leading the Opposition alliance comprising the JMM, the Congress and the Rashtriya Janata Dal (RJD). According to the alliance's seat-sharing arrangement, the JMM will contest 43 seats, Congress 31 and RJD in seven constituencies.

Asked if the Supreme Court's Ayodhya verdict could have an impact on the polls, he said the matter is old and now it is over.

'It has no relevance to the state polls. The court has given its verdict and it is not right to make this a political issue. The issue has been solved and everyone has to abide by it,' the 44-year-old leader said.

Asserting that the people of Jharkhand will no longer be 'duped' by the Raghubar Das-led government and they will vote for change, Soren pointed to the alliance trouble the BJP is facing in the state.

'Look at the condition of their alliances. The All Jharkhand Students Union, which was in power with the BJP, has fielded its candidates against the BJP. The JD(U) is fighting separately, so is the LJP,' he said.

'They sense defeat. AJSU is the B-team of the BJP. They enjoyed power for five years and now they see which way the wind is blowing. The allies are deserting the sinking ship of the BJP,' Soren said.

The NDA allies — the BJP and the AJSU party — will clash in 15 constituencies out of the total 81 Assembly seats.

Lok Janshakti Party (LJP) president Chirag Paswan announced last week that his party will contest in 50 seats on its own after his efforts to ally with the BJP, its senior partner in Bihar, went in vain.

Another BJP ally in Bihar, the Janata Dal (United), has already announced that it would contest the Jharkhand polls alone.

Soren alleged, 'The BJP has no issues to raise. This is because, for five years they have just caused destruction in states ruled by them and they will have to answer in Jharkhand. They have no answer, so they are playing politics with sentiments and raising emotive issues.'

'Unemployment is sky high, prices are sky high, farmers are committing suicide and people are dying due to lack of oxygen. Development was never an issue for them (the BJP). If you talk of development, they close down the agencies coming out with government data,' he said.

About his party's plans and ideas that it will put before people during the campaign, Soren said in the last five years, the Raghubar Das government has taken several wrong decisions and he will bring them to the fore during the hustings.

'The Land Acquisition Act is a major issue. The issue of Chotanagpur Tenancy and the Santhal Pargana Tenancy Acts (which the BJP government wanted to amend) is another major one. Also, unemployment, definition of domicile that they have brought in, will be important issues,' he said.

'Land is being acquired on the basis of gun and muscle power and farmers lives have been lost. We will put an end to this. We have promised to generate employment. We will create five lakh new jobs and give unemployment allowance till the youth get the jobs,' Soren said.

'We will ensure 75 per cent reservation for the youth of Jharkhand in private jobs and also settle the domicile issue,' the former chief minister said elaborating on his plans if voted to power.

He also said that if voted to power, his government will give 50 per cent reservation to women in government jobs.

Jharkhand elections will be held in five phases between November 30 and December 20, and the counting of votes will take place on December 23.