JDU has consistently stressed the need for holding the elections before November 29; Opposition RJD wants them deferred in view of the pandemic 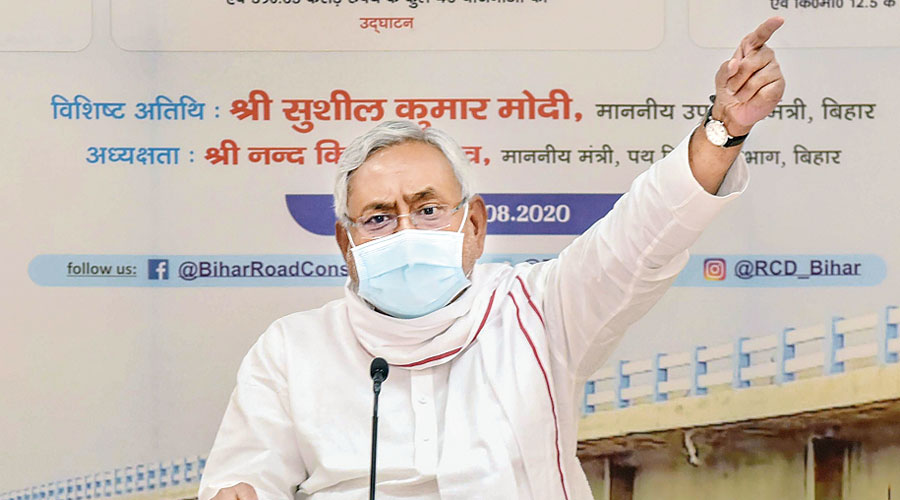 Bihar is the first state scheduled to go to polls since the coronavirus pandemic hit, but the ruling and Opposition parties are divided on whether elections should be held now.

The state has reported over 90,000 Covid cases and 465 deaths. It is also reeling under floods that have affected over 75 lakh people.

Veteran politicians attribute the JDU’s stand to its fear of President’s rule if elections are not held on time. Power will move out of Nitish’s hands to the governor, and by proxy, to the Centre where ally BJP is at the helm.

“Nobody can be trusted completely in politics. President’s rule will give an edge to the BJP. It will call the shots and control the administrative machinery in the state for the duration, and may emerge from the shadows of the JDU to become the senior partner in the alliance instead of its current status as a junior one,” a senior JDU leader, who has been with Nitish for around three decades, told The Telegraph on condition of anonymity.

Asked why the party is insisting on holding polls on schedule amid the pandemic, JDU secretary-general K.C. Tyagi argued that if elections could be held in Sri Lanka, Singapore, South Korea, Rwanda, Belarus and parts of the US, why not Bihar.

Asked if the JDU fears the possibility of President’s rule, Tyagi said: “Why should there be President’s rule? Neither is the law and order situation bad nor is there any emergency-like situation. If it is imposed in Bihar then there should be President’s rule in all the states in the country. We are facing natural calamities. Nothing can be done about them.”

Opposition Rashtriya Janata Dal (RJD) has been vociferous about its demand that the elections be deferred in view of the pandemic. It has appealed to the Election Commission to postpone the polls.

“What if the elections turn out to be a super-spreader coronavirus event? We have written about this to the EC though holding elections is its prerogative. How will it protect so many officials and voters? How can we approach the households where people have become infected or have died? Even Prime Minister Narendra Modi has expressed his concerns about the Covid situation in Bihar,” RJD national spokesperson and Rajya Sabha member Manoj Jha said.

However, RJD sources said the party was not averse to President’s rule in the state for two reasons. It will weaken Nitish and also give RJD the time to regroup and strengthen itself if party chief Lalu Prasad is released on bail in November.

Lalu’s presence would boost the morale of the Opposition in the state. He is currently serving time in Ranchi after being convicted by a CBI court in four out of six fodder scam cases relating to fraudulent withdrawals of over Rs 1,000 crore. He has been acquitted in one case, while another is still in the trial stage.

“In October, Laluji will be completing half of the sentences in all the cases in which he has been convicted. There is a provision for bail in such a situation. We are waiting for the time and will file for bail,” RJD MLA and Lalu’s close confidant Bhola Yadav told The Telegraph.

The Congress has also written to the Election Commission to defer the polls in the light of the pandemic and the floods. “This is not an appropriate time to hold elections in the state,” Bihar Pradesh Congress Committee president Madan Mohan Jha said.

The BJP appears nonchalant. “We respect the EC and will abide by whatever decision it takes,” BJP spokesperson Nikhil Anand said.

BJP sources said the party would sweep the polls with the JDU if they are on time and will enjoy the fruits of power if any postponement leads to President’s rule.

The approach road to a Rs 509-crore bridge over the Gandak river collapsed under pressure from floodwaters in Bihar’s Gopalganj district before its inauguration by chief minister Nitish Kumar on Wednesday, prompting the Opposition to allege corruption and question the hasty launch of projects.

The Bangra Ghat Mahasetu has an 11km approach road in Gopalganj district and 8km in Muzaffarpur district. Nitish inaugurated it via videoconference along with several other projects.

“A 30-metre breach in the approach road happened around 7km away from the bridge on the Gopalganj side on July 26. It was a result of seven breaches in the Gandak embankment,” road construction department principal secretary Amrit Lal Meena told The Telegraph. Meena said the main bridge and all smaller bridges and culverts were safe.