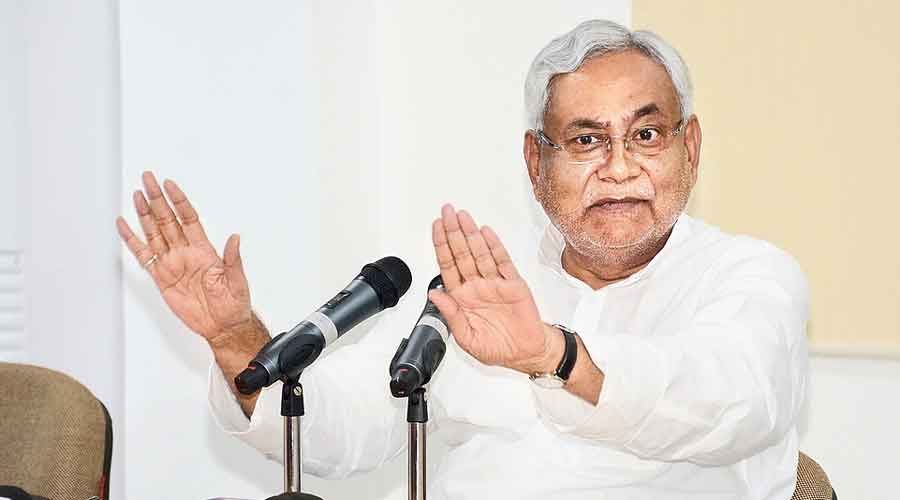 Bihar chief minister Nitish Kumar on Friday lent support to the police who have been barging into wedding ceremonies in search of liquor without any warrant and women police officers or constables.

He also hit out at industry leaders for suggesting that liquor should be given to visitors to the state.

“The police paid a visit to a marriage ceremony and there was much brouhaha over it. People started saying that  no women constables were present. Won’t the police go to any place if there are intelligence inputs about liquor? Is it a crime? I am telling you that the police will go there,” Nitish said.

“What is the problem if nothing is recovered? Can intelligence inputs be cent per cent correct? And if nobody is indulging in liquor consumption, then what is the worry?” the chief minister asked.

The chief minister was speaking at a Prohibition Day event in Patna, where he led the oath-taking ceremony of government officials. Over 9 lakh government employees across the state took the oath of lifelong abstinence from liquor.

This was the fifth time the officials took such an oath and submitted a signed pledge.

“We are administering the oath again to strengthen the minds of the people with regard to prohibition,” Nitish said.

Bihar went dry in April 2016, though the availability of liquor never stopped. It went underground with racketeers smuggling in the booze.

A spate of hooch incidents claimed around 50 lives in November this year and led to the criticism of prohibition by all sections of the society and the Opposition parties. It forced the Nitish-led government to order a crackdown on the manufacturing, trade and consumption of illicit liquor.

In compliance with the order, the police have been conducting widespread raids. Over 50 weddings without any warrant. In many cases, the  police allegedly barged into the rooms of brides without the presence of any woman officer or constable.

None of the searches at the marriage ceremonies has yielded any liquor so far.

The police have been raiding hotels and residences too without search warrants. In some instances, the police managed to seize liquor and arrest several persons.

As people from all walks of life decried such police highhandedness, some officers said they were following orders.

“While reviewing the implementation of prohibition, I asked officers to pay special attention to Patna because the maximum problem was here. I told them that the entire state will be under control the day you control Patna,” Nitish said.

On the suggestion by entrepreneurs and leaders of industry and commerce that visitors from other states be allowed to consumer liquor, Nitish said: “Such statements show that there is something wrong in the minds of these people.”

Nitish attacked the Opposition Rashtriya Janata Dal (RJD), whose leaders Lalu Prasad and Tejashwi Prasad Yadav have described the prohibition as a failure.

“They (Lalu Prasad and Tejashwi) have forgotten that they were with us when liquor was banned in the state. They supported it. At that time, the BJP was not with us, but it also supported the step,” Nitish said.

Asserting that there has been no loss of revenue because of  prohibition, the chief minister said the ban  benefited the society and the economy.

He directed officials to publicise the dangers of consuming liquor. “We must publicise that if you drink secretly, somebody will pass on poisonous liquor and you will die,” Nitish said.