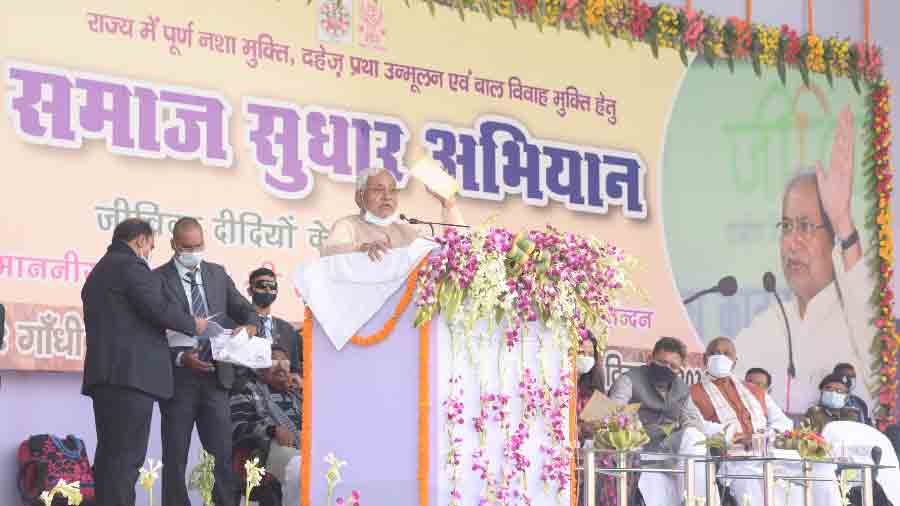 Bihar chief minister Nitish Kumar embarked on a social reform campaign on Wednesday from Motihari in East Champaran district by paying floral tributes to Mahatma Gandhi and emphasising on implementation of prohibition, eradication of dowry and child marriage.

There is a recent flurry of activities spearheaded by him such as the decision to conduct a caste census, reviving the demand for special category status for the state and anti-corruption raids against public servants on almost a daily basis, yielding crores in cash, jewellery and investment in real estate.

His choice of Motihari has a special symbolism attached to it because it is the place from where Mahatma Gandhi staged his first satyagraha in the country — known as Champaran Satyagraha — in 1917 against compulsory indigo farming imposed by the British.

The statewide tour will continue till January 15 ending at Patna before crisscrossing all the nine administrative divisions. It will also include review meetings of various development and welfare schemes. However, Nitish asserted that the campaign would continue even after the tour is over.

Addressing a public meeting attended by thousands of women associated with the state government’s Jeevika (Bihar Rural Livelihoods Projects) self-help groups working in the field of socio-economic uplift, Nitish reminded the people that he implemented prohibition on the demand of women.

“Bapu (Mahatma Gandhi) had talked about the ill-effects of liquor on the human body and society. I implemented prohibition on the demand of women and we have to take it forward. The World Health Organisation (WHO) report published in 2018 has also revealed how alcohol consumption causes deaths, diseases and accidents,” Nitish said.

The chief minister also asserted that henceforth he would“not attend any marriage function if the invitation card does not specifically mention that dowry has not been taken.”
Senior politicians and political analysts are seeing Nitish’s manoeuvres as an attempt to redeem his image, claim his lost stature, keep ally BJP on a leash and
prepare the ground for a last shot at the Prime Minister’s post in 2024.

Though he is heading the National Democratic Alliance (NDA) government in the state, his Janata Dal United (JDU) fared disastrously in the 2020 Assembly elections, relegated to the third position with just 45 seats. Lalu Prasad’s Rashtriya Janata Dal (RJD) has 75 and the BJP has 74 seats.

“Nitish is under much pressure. The BJP is trying to impose its divisive agenda and issues here also like the controversy on namaz and other such things on the lines of Haryana, Uttar Pradesh and other states ruled by it. His allies are attacking him on prohibition because it has failed miserably. He is feeling cornered and his latest ventures are to come out of it,” veteran politician and RJD vice-president Shivanand Tiwari, who was earlier with the JDU, told The Telegraph.

Tiwari pointed out that earlier Nitish was considered a heavyweight politician, and more capable than Narendra Modi before he became the prime minister.

“He (Nitish) was considered an alternative, liberal, democratic face to Modi. He was well educated, refined and had an aura. I am a witness to phone calls coming to him from all over the country. People saw him as one who could give the BJP a run for its money. But he lost it. He is now trying to regain his stature and all his preparations are suggesting that he will take a shot at the Centre,” Tiwari said.

Even at present, Nitish and his JDU have publicly differed with the BJP on a host of issues such as National Register for Citizens, National Population Register, uniform civil code, Article 370 and others. His caste census move has the potential to counter communal politics.

Nitish, during his 16-year tenure as Bihar chief minister, broke away from the BJP in 2013, shook hands with the RJD and Congress to form a grand alliance and trounced the NDA in 2015 state elections. In between, his JDU, just like other parties, had to contend with the Modi wave in the 2014 Lok Sabha polls and fared poorly.

However, Nitish ditched the grand alliance in 2017 and returned to the NDA. But these years also saw the beginning of the deterioration in law and order, a rise in corruption at all levels in the government, administrative degeneration and indiscipline. These have kept accelerating since then.

“Nitish got the mandate in 2005 to rule Bihar on the promise of reigning in crime and corruption. He succeeded in the initial years and the infrastructure development was like an icing on the cake. It returned him to power with heavy majority in 2010,” a senior JDU leader and a minister in the state cabinet said on the condition of anonymity.

“However, he lost his attention and grip on the situation. Corruption is at its highest level in the state. Bribery in government offices and schemes is rampant. The common people have suffered much and become antagonistic to our rule. This was a reason we barely survived the 2020 elections. Nitish has realised this, hence a crackdown on corruption has started,” the minister said about the anti-corruption raids.

The raids conducted by the vigilance department sleuths and the economic offences unit of the Bihar police have yielded disproportionate movable and immovable assets of around Rs 100 crore in the last two months.

However, the continuously increasing crime is yet to be checked. As per the National Crime Records Bureau, the state was at the second position in the country with 3150 murders in 2020. Uttar Pradesh was at the top with 3779 murders in a population of around 23 crore in comparison to 12 crore of Bihar. Loot, dacoity, robbery, bank loot, snatching are like a new normal for the state now.

On the other hand, a section of senior politicians are of the opinion that Nitish’s current moves are aimed at “diverting public attention from the failure of prohibition, deteriorating law and order, and the bullish BJP.”

They are also of the opinion that if Nitish orders a crackdown on rising crime and curbs it, he will regain his stature.