Lok Janshakti Party on Friday put out full-page advertisements in newspapers in Bihar and also in some Delhi dailies, making its presence felt ahead of the upcoming Assembly elections 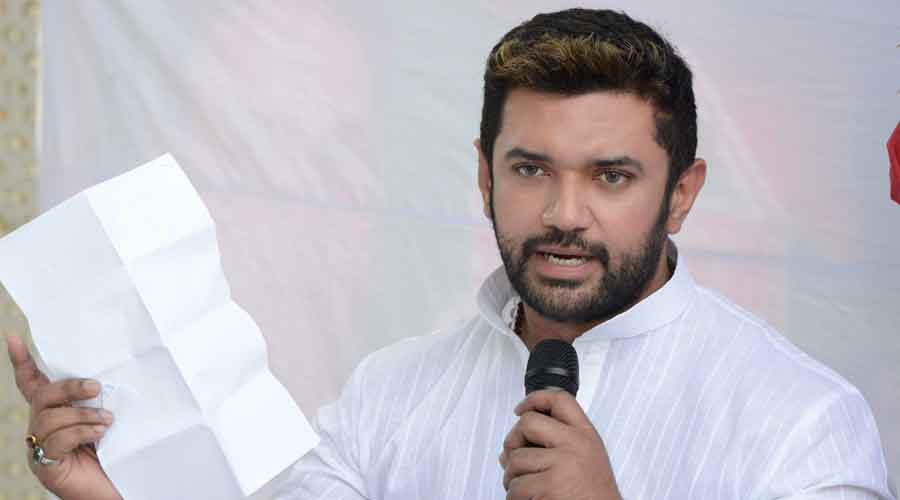 The LJP, like ally BJP, has begun asserting itself to drive a hard bargain for the Bihar elections scheduled later this year, in the process attempting to undercut JDU chief Nitish Kumar who is said to be battling anti-incumbency after three terms as chief minister.

Hectic strategising for the year-end polls has begun with the three NDA partners eyeing to bolster their position amid hopes of an easy victory due to the disarray in the Opposition camp.

The LJP on Friday put out full-page advertisements in newspapers in Bihar and also in some Delhi dailies, making its presence felt.

The ads seek to project Chirag Paswan, son of veteran Dalit leader Ramvilas Paswan, as the face of the community after his father. This comes days after Nitish welcomed another Dalit leader, former chief minister Jitan Ram Manjhi, into the NDA fold in Bihar.

The move by Manjhi’s party, the Hindustani Awam Morcha, to exit the Opposition “Grand Alliance” and join the NDA is being seen as a plan by Nitish to counter the LJP’s Dalit card.

Chirag, who has taken over the reins of the LJP from his ageing father, has been consistently attacking Nitish over governance issues recently. The LJP has only 2 MLAs in Bihar and is not part of the NDA government led by Nitish.

“They are fighting to rule over us and we are fighting to feel proud of Bihar,” a line in the LJP ad, which positions Chirag as the “Yuva Bihari”, said. This too was seen as an indirect attack on Nitish, trying to accuse him of being interested only in power.

“Nitish Kumar is trying to sideline the LJP but we are determined to prove our worth in Bihar,” an LJP leader said, threatening to even field candidates against the JDU to harm Nitish’s prospects.

The LJP has called a meeting of its Bihar leaders next week. Privately, party leaders are claiming that a decision on fielding candidates against Nitish’s nominees could be taken at the meeting.

All this, however, is being viewed as part of efforts to bargain hard for a larger share of seats.

“We have six Lok Sabha MPs and so we should get at least 36 seats to contest (in the Assembly elections),” another LJP leader said. The LJP had in 2015 contested 42 seats when Nitish had joined hands with the RJD-Congress.

The flurry of activity in the LJP comes close on the heels of a similar effort by the BJP. At a meeting of Bihar MPs recently, BJP leaders demanded an equal share of seats. The MPs argued that the Lok Sabha poll formula of the BJP and the JDU contesting an equal number of seats (17) while leaving a fare share (6) for the LJP should be followed. Bihar has 243 Assembly seats.

“Brand Nitish Kumar has eroded substantially in Bihar. There is simmering anti-incumbency against him,” a Bihar BJP MP said, stressing that in 2020 Nitish can no longer hope to play “big brother”.

There is a perception among a section of the JDU that the BJP and the LJP might be playing in tandem to downsize Nitish.

“There is only one ‘big brother’ now: Narendra Modi and the BJP. We want the BJP to sideline Nitish and take the lead in Bihar,” an LJP MP said.

The BJP, however, is not ready to hand out such treatment to Nitish just yet, according to sources. Party strategists feel that despite 15 years of anti-incumbency, he still commands substantial support among sections of the lower backwards and Dalits.

“At the same time, Nitish should understand the new political reality…. He should also realise that the BJP is no more the party it used to be,” a key Bihar BJP leader said.

The Election Commission on Friday again said it was planning to go ahead with the Bihar Assembly elections as scheduled. “Considering that General Assembly Elections of Bihar are also due and required to be completed before 29th November 2020, the Commission has decided to conduct all the 65 by-elections (across the country) and the General Assembly Elections of Bihar around the same time,” the EC said.