While their main demand is the repeal of the three new farm laws, they also want the state’s BJP government to withdraw the new cattle slaughter law 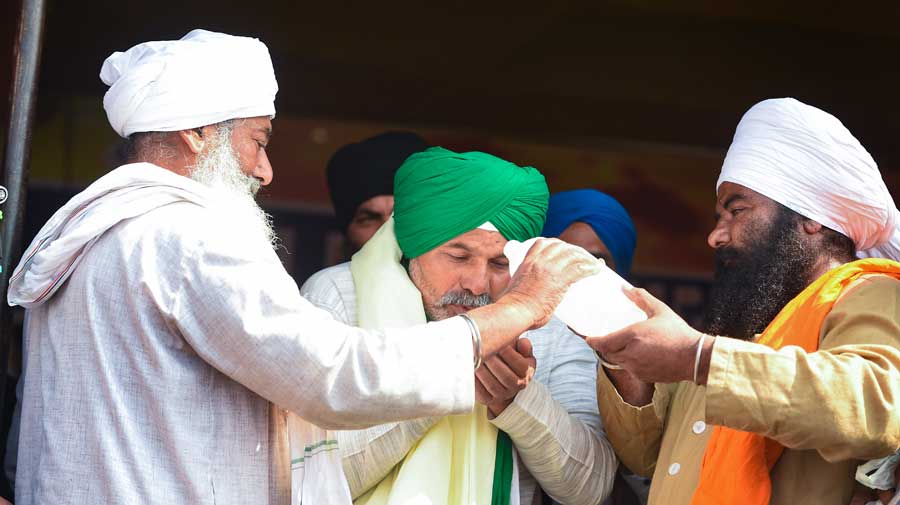 BKU spokesperson Rakesh Tikait during their protest against the farm law at Ghazipur border in New Delhi on Wednesday.
PTI
K.M. Rakesh   |   Bangalore   |   Published 11.02.21, 01:27 AM

Karnataka’s farmers are gearing to hold rallies featuring Bharatiya Kisan Union leader Rakesh Tikait to try and galvanise the farming community across southern India, having already held a series of protests in solidarity with their peers agitating in Delhi.

While their main demand is the repeal of the three new farm laws, they also want the state’s BJP government to withdraw the new cattle slaughter law that is forcing farmers to spend huge sums on the upkeep of unproductive cattle, farmer leader Badagalpura Nagendra said.

“We are getting Tikait to participate in a huge rally in Bangalore and a similar event in north Karnataka,” Nagendra, president of the state farmers’ association and Hasiru Sene (Green Army), told The Telegraph on Wednesday.

“We want to bring farmers from all the southern states together to strengthen our movement against the new farm laws and other issues our community is facing.”

The dates will be decided at Tikait’s convenience, Nagendra said. “We are looking towards dates at the end of the month since that would give us enough time to organise the events.”

Asked to explain the choice of Tikait, Nagendra said: “Tikait is a national leader who commands respect from most of the farmers’ organisations. Since his presence has helped the agitation up north, we expect him to be a magnet for similar mobilisation in the south.”

Nagendra said Dalit, student and workers’ organisations would join the upcoming protests to show “we are not alone in this fight”.

On the Karnataka Prevention of Slaughter and Preservation of Cattle Act, 2020, which imposes a blanket ban on cattle slaughter and prescribes up to seven years’ jail for violations, Nagendra said it had hit the farmers badly.

“It prevents us selling unproductive cows or calves and forces us to spend huge sums on their upkeep,” he said.

“We will also be demanding (the Centre provide) a relief package of Rs 2 lakh crore for Karnataka, which has over the past 21 years witnessed 13 years of drought and 2 years of floods that have left farmers reeling.”

As a prelude to the main events, the farmers will organise a march to the Assembly during the budget session, expected to begin in 10 days, Nagendra said.

“That will be preceded by protests in the 150 taluks of Karnataka to mobilise farmers,” he said.

Close to 50 farmers’ organisations in Karnataka had recently united under the Samyukta Horata (United Struggle) to air their concerns and express support for the farmers protesting in Delhi.

The Horata effectively shut down the state’s highways on February 6 during the nationwide “chakka jam”.

“We will continue to fight under the Samyukta Horata until the Centre and the state government heed our demands and end this climate of hostility towards farmers in the country,” Nagendra said.