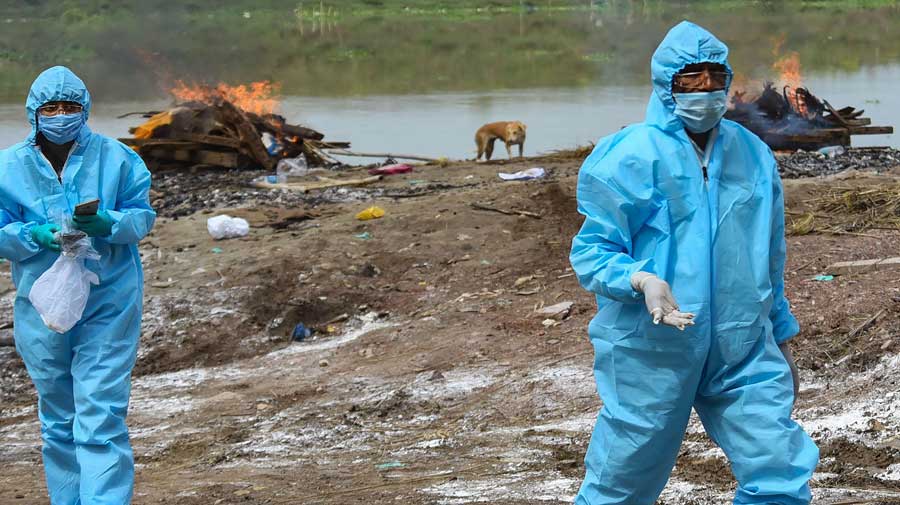 The last rites of 108 people were performed according to coronavirus protocol in Bhopal on Thursday, according to records maintained by crematoriums and graveyards and officials working there, the number far higher than the Madhya Pradesh government’s claim on Covid-19 fatalities that day.

The government had said only eight persons had died of the infection in Bhopal district on Thursday.

According to the records with two crematoriums and a graveyard, the last rites of 156 people were performed on Thursday in the state capital. Of them, 108 were coronavirus-infected, the documents showed.

“Eighty-eight people were cremated in our crematorium on Thursday. Of them, 72 had died of coronavirus,” Bhadbhada Vishram Ghat (crematorium) secretary Mamtesh Sharma said. Of the 72 Covid deceased, 45 were from Bhopal, while 27 were from other districts, he said.

“The last rites of 51 people (21 of them Bhopal residents) were performed at our crematorium on Thursday,” Subhash Nagar Vishram Ghat manager Sobhraj Sukhwani said, adding that of these, 26 had died of the respiratory disease.

“Burial of 17 people took place in our cemetery. Of them, 10 were the ones who died of coronavirus. Eight of the deceased were local while the two hailed from other districts,” president of Zada Graveyard Committee, Jahangirabad, Rehan Golden, said.

According to a state government bulletin on Thursday, 666 patients had died of Covid-19 in Bhopal district since the outbreak.

District chief medical and health officer Dr Prabhakar Tiwari could not be contacted for his comment.

Chief minister Shivraj Singh Chouhan’s explanation for the gap in numbers was that last rites of suspected Covid patients were also performed as per the Covid-19 protocol.