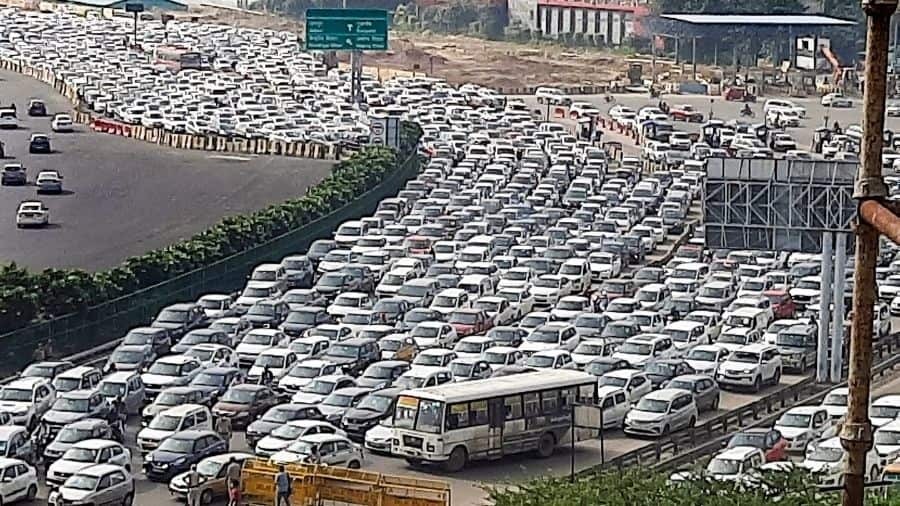 Markets remained open and business activities were largely unaffected in the national capital on Monday, though massive traffic snarls were witnessed in border areas due to road blockades by protesters and security checks by police during the Bharat Bandh called by farmers against the Centre's three agri laws.

The auto and taxi unions as well as several traders' bodies extended only "in-principle support" to the Bharat Bandh and decided not to join the strike, saying their livelihood has already been hit hard due to the COVID-19 pandemic and lockdown.

According to Railway officials, about 25 trains have been affected due to the Bharat Bandh including Delhi-Amritsar Shan-e-Punjab, New Delhi-Moga Express, Old Delhi-Payhajot Express, Vande Bharat Express from New Delhi to Katra, and Amritsar Shatabdi.

"More than 20 locations are being blocked in Delhi, Ambala, and Firozpur divisions. About 25 trains are affected due to this," a spokesperson for the Northern Railway said.

A section of trade unions and civil society groups held a protest at Jantar Mantar in solidarity with the Bandh called by the Samyukta Kisan Morcha, the umbrella body of over 40 farm unions spearheading the farmers' agitation.

The protesters held banners of 'Long Live Farmers Unity' and demanded the repeal of the agri laws and equal opportunities for all.

Parts of the national capital witnessed traffic snarls in morning hours as police closed some key roads to prevent any untoward incident during the bandh. Commuters faced difficulty while crossing the city borders, especially the Delhi-Gurgaon border.

The traffic on DND was also affected. The Ghazipur border is closed for vehicular movement and the whole traffic is being diverted to DND and Apsara border for Noida and Ghaziabad respectively.

There was chaos on one carriageway of the national highway coming from Ghazipur border to Sarai Kale Khan near Akshardham Mandir.

The Delhi Police increased security checks at its border points which led to the slowing down of traffic and it informed commuters about road closures and traffic snarls on Twitter.

According to police, roads around the historic Red Fort, which witnessed violent clashes during a farmers' tractor rally on January 26, as well as the dual carriageway at the Ghazipur border were closed for traffic.

"The traffic is heavy at the Kalindi Kunj flyover and Kalindi Kunj metro station while it is moving slowly on DND flyway. The traffic is also heavy at Rajokri toll plaza as the local police have set up a checkpoint for vehicles," a senior police official said.

A Delhi Metro station near Tikri Border, one of the sites of the ongoing farmers' protests, was also closed for security reasons in view of the Bandh. The station in Haryana -- Pandit Shree Ram Sharma -- falls on the Green Line of the network.

Autorickshaws and taxis plied normally and shops were open.

"Previously also we had supported Bharat Bandh by the farmers but continued to ply our autos and taxis. This time also we are in support of genuine farmers but we are not on strike because our members are in deep distress due to shrinking earnings in pandemic times," said Rajender Soni, the general secretary of the Delhi Auto Taxi Union.

The Sarvoday Driver Association of Delhi, representing many drivers of cab aggregator platforms, also supported the farmers but did not join the strike.

"We are in support of the farmers, but our work was affected due to the pandemic and we cannot afford to go in their support by striking," said Kamaljeet Gill, president of the Association.

Other auto and taxi unions expressed the same sentiment.

"We fully support the farmers. But in view of the financial crisis faced by us due to COVID, we are extending our moral and in-principle support to them and their demand while working normally," said Anuj Rathor, secretary of the Rashtriya Rajdhani Kshetra Auto Drivers Association.

Markets and shops in the city were open as farmers have not contacted our associations for any strike, said Brijesh Goyal, chairman of the Chamber of Trade and Industry(CTI).

"Also, the festival season is approaching and it is time for traders to recover some of the losses they faced due to the pandemic and lockdown. We do support the farmers and urge the government to meet their demand," he said.

Confederation of All India Traders (CAIT) Secretary General Praveen Khandelwal said there was no effect of the Bandh on the markets across the country including Delhi.

"All the markets including in Delhi remained fully open and business activities in the markets went on as normal. We have advised the farmer leaders to leave the path of struggle and find ways to negotiate with the government," he said.

To mark one year since the laws were passed, farmer organisations had called a Bharat Bandh on Monday from 6 AM to 4 PM.

The government has projected them as major reforms but the unions allege that the laws will leave the farmers at the mercy of big corporates and have been protesting on Delhi's borders since November last year.