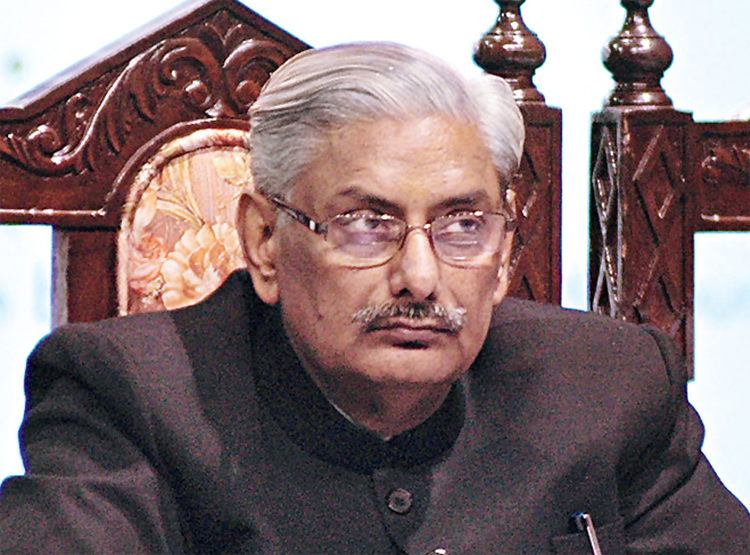 The controversy had erupted after Justice Arun Mishra, third in seniority among Supreme Court judges, had at a global jurist conference on February 22 lauded Modi, the chief guest, as “an internationally acclaimed great visionary” and a “versatile genius who thinks globally and acts locally”.
(File picture)
R. Balaji   |   New Delhi   |   Published 11.05.20, 11:28 PM

The Bar Council of India on Monday “stayed” the suspension of Supreme Court Bar Association secretary Ashok Arora, who had attempted to get the association president Dushyant Dave removed for criticising a Supreme Court judge’s praise of Prime Minister Narendra Modi.

The council, the regulatory body for advocates, said it had been compelled to act because the “infighting” at the top was hurting the SCBA’s “dignity” and could have a “far-reaching effect on the workings of Bar associations of the country”.

It said it would even now not “enter into the merits of the matter”, and referred the row to the SCBA’s general body whose decision it said would be final and binding on all.

The controversy had erupted after Justice Arun Mishra, third in seniority among Supreme Court judges, had at a global jurist conference on February 22 lauded Modi, the chief guest, as “an internationally acclaimed great visionary” and a “versatile genius who thinks globally and acts locally”.

This prompted SCBA president Dushyant Dave to issue an official resolution on February 25 saying such remarks were unbecoming of an apex court judge and reflected poorly on judicial independence.

At the time, the Bar Council had suggested that Justice Mishra had done no more than extend certain courtesies to chief guest Modi while delivering the vote of thanks.

The matter came to a head on May 7 when Arora called an “emergent general meeting” to discuss Dave’s removal as SCBA president and member, and the withdrawal of his “unauthorised” February 25 resolution.

Dave hit back on May 8, getting the executive committee of the SCBA to suspend Arora.

On Monday, the Bar Council said it was “deeply dismayed and distressed” at the conduct of a section of the Bar.

“We are of the unanimous view that the resolution passed by the executive committee on 8th May, 2020, suspending Mr Ashok Arora is beyond the powers of executive committee and is, therefore, illegal, cavalier, undemocratic and autocratic in nature. It is vindictive on the face of it,” a Bar Council statement said.

“Mr Arora was elected as honorary secretary by the whole general body of members of Supreme Court Bar Association and by no stretch of any legal imagination the executive committee which consists of similarly elected members can assume powers to suspend him. It is mind-boggling misuse and abuse of its position by the executive committee. Ordinarily, even a body which is conferred with power to take such an action would issue a show cause notice to the person concerned.”

“All pending issues including the contentious issues among president, honorary secretary and executive committee members shall be part of the agenda for general body meeting whose decision it said would be binding on all,” the council said.