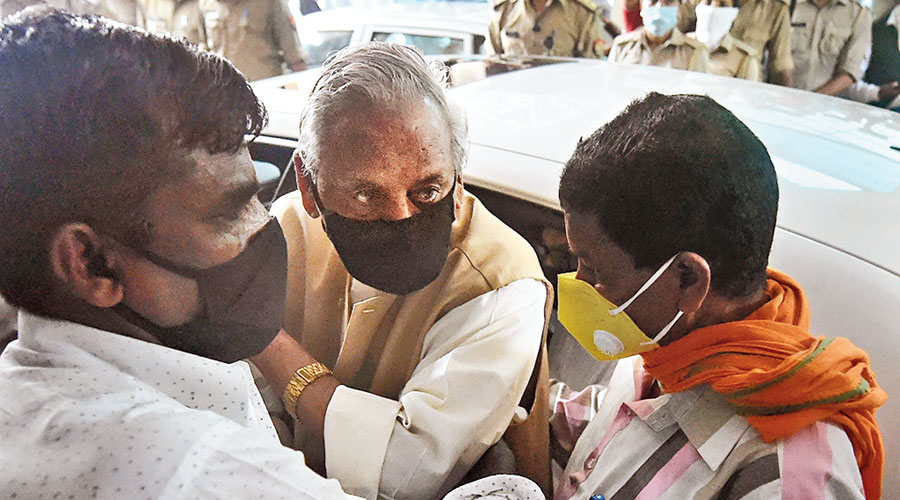 BJP leader and former Uttar Pradesh chief minister Kalyan Singh said on Monday that the charges against him in the Babri Masjid demolition case were “baseless and motivated”.

After appearing in the special CBI court in Lucknow, he said: “There was a Congress government at the Centre at the time and it implicated me in the Ayodhya masjid demolition case without any reason. The charge is politically motivated and baseless. As the chief minister of the state at that time, I had done whatever was (to be done) in my command.”

Kalyan was the chief minister when on December 6, 1992, kar sevaks of the BJP, Vishwa Hindu Parishad (VHP), Shiv Sena and other Sangh parivar outfits attacked and pulled down the 16th century Babri Masjid in Ayodhya claiming that Mughal emperor Babar had built it after demolishing a temple of Lord Ram, who according to mythology, was born there and ruled the town.

Kalyan had filed an affidavit in the Supreme Court at the time assuring it that the mosque would be protected. The then P.V. Narasimha Rao government had removed his government in Uttar Pradesh and imposed President’s rule in the state after the demolition.

“My government had created a three-tier security arrangement at that time to protect the monument. But the Centre (Congress government) implicated me in the demolition case,” Kalyan told reporters after appearing in the court of special judge Surendra Kumar Yadav for around three hours.

Earlier, Kalyan had appeared in the court in September 2019 and later told reporters: “Demolition of the structure was not a conspiracy but the result of the suppressed religious faith of crores of people.”

Before that, he had told reporters that it was “a proud moment” for him.

Santosh Dubey, president of Dharma Sena, who also appeared in the CBI court on Monday, told reporters: “I was not involved in razing the structure but it was always my wish that there should be a Ram temple soon.”

The Supreme Court on November 9 last year ruled that a trust has to be formed within three months for the construction of the temple at the erstwhile disputed site where the Babri mosque stood before being demolished in 1992. The court had also ordered that a five-acre alternative plot has to be given to the Sunni Central Waqf Board in Ayodhya for the construction of a mosque, an order which was complied with by the Uttar Pradesh government after a few months.

There are 32 accused in the demolition case who are surviving, while a dozen others have died since 1992, including Shiv Sena patriarch Bal Thackeray and VHP leaders Ashok Singhal, Giriraj Kishore and Mahant Avaidyanath. The surviving accused include veteran BJP leaders L.K. Advani, Murli Manohar Joshi, Uma Bharati and Ram Vilas Vedanti and Bajrang Dal head Vinay Katiyar.

The CBI had filed two chargesheets in the case in 1993 and 2017. The parivar leaders were charged under penal code Sections 153A (promoting enmity between religious groups), 153B (making assertions prejudicial to national integration), 295 (defiling a place of worship) and 120B (criminal conspiracy).