The BJP, which drew a blank in the recent Assembly elections in Kerala, has also been trying to court Christians in the southern state 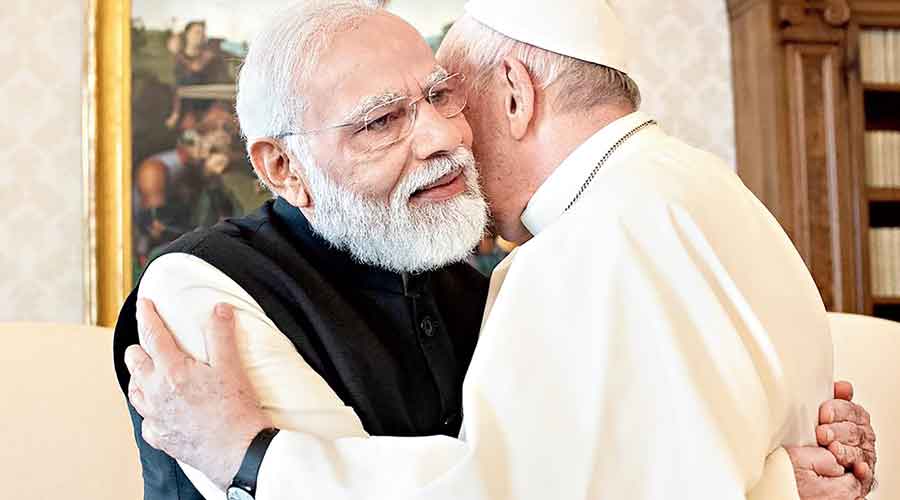 Prime Minister Narendra Modi on Saturday invited Pope Francis, the spiritual and temporal head of the Catholic Church, to visit India when he called on the pontiff at the Vatican in the morning.

The invite comes ahead of the Goa elections — where Catholics account for a quarter of the population — and is being used to address criticism overseas about India moving away from its constitutional path of a secular, liberal democracy.

The BJP, which drew a blank in the recent Assembly elections in Kerala, has also been trying to court Christians in the southern state.

The choice of some of the gifts the Prime Minister and the Pope exchanged was telling: Modi presented a silver candle stand usually used in altars; the Pope gave him the document on Human Fraternity, signed on February 4, 2019, in Abu Dhabi by the pontiff and the Grand Imam of Al-Azhar.

The BJP sought to amplify the meeting.

Modi himself announced the invitation in a tweet with pictures of the meeting, including his trademark hug of the pontiff. Later, the external affairs ministry, in a readout on the “private audience at the Apostolic Palace in the Vatican”, said the Prime Minister had invited the Pope to “visit India at an early date which was accepted with pleasure”.

Briefing journalists in Rome later in the day, foreign secretary Harsh Vardhan Shringla paraphrased the Pope as saying: “You have given me the greatest gift. I am looking forward to visiting India.”

Asked specifically if religious freedom had come up in the one-to-one meeting between the Prime Minister and the Pope, the foreign secretary said: “The discussion was completely devoid of any extraneous issues. It was very warm and convivial.”

It added: “The request for a papal visit to India ha(d) already been advanced in 2017, in view of the Pope’s apostolic journey to neighbouring Bangladesh and Myanmar in 2018, but it was not possible to follow up.”

About the meeting, the ministry said the two leaders had discussed the pandemic and climate change. “His Holiness appreciated India’s assistance to countries in need during the pandemic,” the readout said, underscoring that this was the first meeting between an Indian Premier and the Pope in over two decades.

Former Prime Minister Atal Bihari Vajpayee had been the last to call on the Pope, in June 2000. If the India visit happens, it will be the second visit by a Pope on a BJP government’s watch — the last one was in 1999 when Vajpayee was Prime Minister. It will also be the fourth papal visit to India, the first happening in 1964 and the second in 1986.

The Vatican statement on the meeting detailed all those whom Modi had met and said: “During a brief conversation, the cordial relations between The Holy See and India were discussed.”

Shringla said the “meeting that was scheduled only for 20 minutes went on for an hour”. The Italian Catholic newspaper, Avvenire, said: “The Prime Minister was welcomed by Francesco in the Sala del Tronetto at 8.25am, the face-to-face ended at 9.20am.”

Besides the silver candle stand, Modi gave the Pope a book listing the NDA government’s initiatives to address climate change.

The Prime Minister told the pontiff that the book was on his “most favourite subject”. The Pope, who has been very vocal on climate change, on Friday urged world leaders heading to Glasgow for the Cop26 Conference to “take radical decisions”.

According to Vatican News, the Pope presented the Prime Minister with a bronze plaque carrying the inscription “The desert will become a garden”, volumes of papal documents, his message for the World Day of Peace and the document on Human Fraternity.

While the visit caught eyeballs internationally, most reports also mentioned the attacks on minorities in India.

Avvenire said “the situation of Christians in India is not easy” and referred to a recent report on the community being targeted along with a mention of Jesuit priest Stan Swamy’s arrest on “terrorism charges” and subsequent death in custody. The Vatican News report on the meeting also mentioned the “growing anti-Christian violence in India”.

Reacting to the optics of the meeting, Opposition leaders highlighted the BJP’s doublespeak. “Raising and praising Indian diversity abroad and showing scant disregard and disrespect for the same at home.… This seems to be the mantra in ‘New India’,” tweeted the RJD’s Manoj Jha.

Trinamul’s Jawhar Sircar wondered: “Will Modi promise Pope that his goons will not attack Christians and churches?”

Did you discuss Fr Stan, PM?

There was no mention whether Modi discussed with Pope Francis, the first Jesuit pontiff, the death of  Father Stan Swamy, the Jesuit priest and one of the oldest terrorism accused in India who passed away in custody on July 5.

Modi has not yet made any public statement on Father Stan. The Vatican had not issued any direct statement but the news portal of The Holy See had published a statement by the Federation of Asian Bishops Conferences calling for the release of Father Stan in October 2020.

The Holy See portal published an obituary of Father Stan.