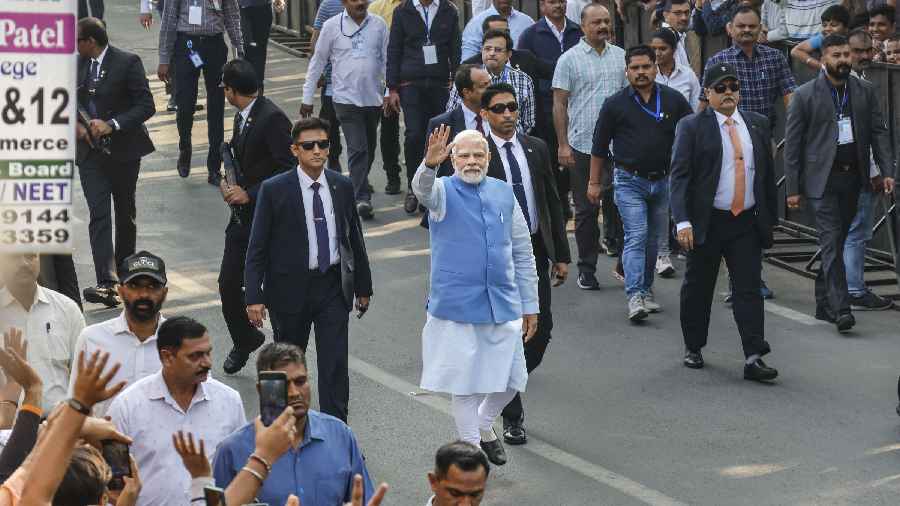 The Gujarat Bharatiya Janata Party unit is upbeat and confident of forming the next government in the state with all the exit polls predicting a big mandate for the saffron outfit.

The counting of votes will take place on December 8.

Despite an aggressive poll campaign by the AAP and its lucrative promises, Arvind Kejriwal-led party was projected to bag anything between two and 13 seats, as per the exit polls.

The majority mark in Gujarat is 92.

Vyas said, "We were confident from the beginning that the people of Gujarat are with us and the BJP will register a grand victory." "The people of Gujarat love our Prime Minister Narendra Modi for all the work he has done for Gujarat and India. The exit poll figures reflect that love for our PM. Our workers on the ground also contributed to ensure that we win," he said.

Vyas said the BJP was never worried about the AAP's entry in Gujarat and did not feel the game could go in Kejriwal's favour for his promises, such as free electricity.

"I want to say on record that AAP will not get a single seat in Gujarat, because they were not at all on the ground and they were only trying to influence people through social media. But, people know the BJP has done much better work for them," he said.

Gujarat BJP General Secretary Pradeepsinh Vaghela claimed his party will get more seats than projected in the exit polls.

"The BJP will break all the previous records. We will get more seats and vote share than received by any other party in Gujarat in the past," he said.

"Through their votes, the people of Gujarat supported nationalism and politics of development. We will form the next government with the help of PM Modi's popularity, (Union Home Minister) Amit Shah's guidance and people's blessings," said Vaghela.

Polling was held in Gujarat in two phases on December 1 and 5.