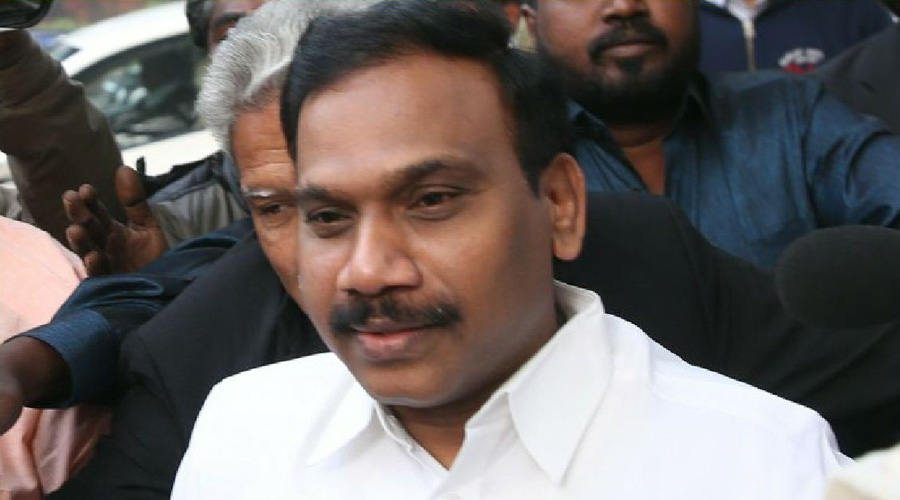 The Election Commission of India on Thursday banned former Union minister and DMK parliamentarian A. Raja from campaigning for two days as punishment for derogatory

The poll panel also sent a notice to Assam BJP minister Himanta Biswa Sarma whose remarks against Congress-ally Hagrama Mohilary of the Bodoland People’s Front were found to be prima facie violating the model code of conduct (MCC).

So far, the commission has been silent on remarks by Bengal BJP president Dilip Ghosh on chief minister Mamata Banerjee’s clothing and on the party’s Nandigram candidate, Suvendu Adhikari, raising fears of a “mini Pakistan” in Bengal.

The BJP’s Kapil Mishra was barred from campaigning in the Delhi polls last year for communal comments.

On March 26, Raja had mocked Palaniswami with an observation on his birth in two speeches that the EC found “not only derogatory but also obscene and lowering the dignity of motherhood”.

Raja was temporarily debarred from campaigning and his name struck off the list of his party’s star campaigners — which implies that his future campaign costs would be calculated as that of the respective candidate of the seat he canvasses in, and not his party. Candidates have an expenditure ceiling, which parties do not have.

Later in the day, Madras High Court dismissed Raja’s plea against the EC’s action. The leader had recently apologised for his remarks.

Sarma, the Assam finance minister, has been sent a notice for a speech on March 28 in which he had threatened a National Investigation Agency probe against Mohilary — a reformed insurgent who gave up arms for electoral politics in 2003.

The BJP leader has been asked to explain his position by 5pm on Friday as his remarks fell within the ambit of Clauses 2 and 4 of the MCC that prohibit unverified allegations and intimidation.