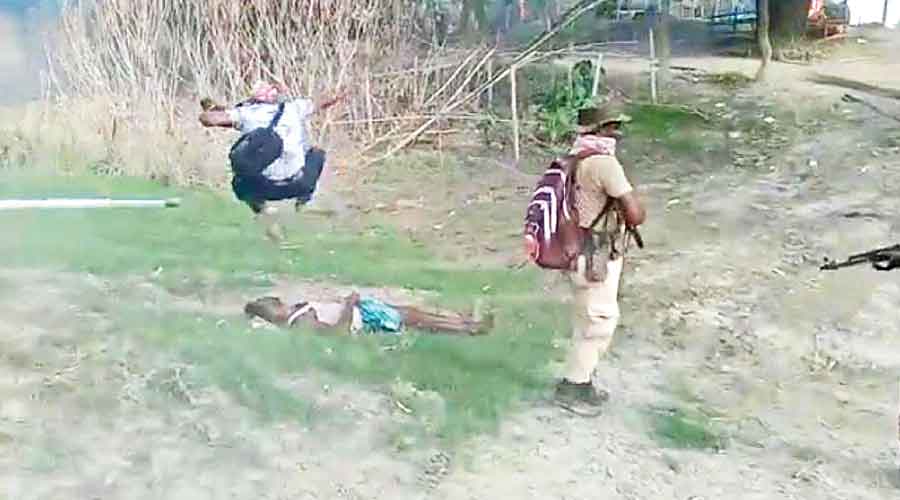 A delegation of rights defenders who visited Assam’s Darrang district, where a day labourer and a child were killed in a land reclamation drive in a minority-dominated settlement last month, has reconstructed a grim picture of the government and private groups creating a situation that culminated in the police firing.

The fact-finding team has also reproduced an account that sheds more light on a related incident in which a photographer stomped on the day labourer, Maynal Hoque, moments after he was shot. Footage of the atrocity had sent shock waves across the world.

The Association for the Protection of Civil Rights (APCR), backed by the Jamaat-e-Islami Hind, recommended in its report rehabilitation measures for the eviction-affected and punishment for “guilty” police personnel.

Hoque, 33, and Shakh Farid, 12, fell to police bullets on September 23 during the eviction drive in Gorukhuti village near Sipajhar. Several other villagers suffered gunshot wounds and 11 police personnel too were injured in the clash.

The APCR report, titled “Eviction, State Violence and Hate”, says: “In July 2021, (Assam chief minister Himanta Biswa) Sarma announced that his government will create a ‘population army’ to ‘curb the birth rate in Muslim-dominated districts’…. Sarma said in July 2021 that shooting at criminals ‘should be the pattern’ if they attempt to escape from custody or try to snatch arms from the police to open fire. ‘If an accused tries to snatch the service gun and run away, or even simply flee, and on top of it he is, say, a rapist, law allows shooting at such a person on the leg, but not on the chest,’ he said.”

The report added: “On September 20, Upamanyu Hazarika, convenor of the PVM (Prabajan Virodhi Manch, an anti-immigration NGO), said in a press statement it was the ‘local indigenous’ who were made to suffer as their lands were acquired for the agriculture project, and the encroachers remained ‘undisturbed’. However, those who are living on the land said they have been residing there since 1965, with their ancestors buying small plots of land from locals. The transaction took place without any paperwork.

“At least 200 families from Dhalpur 3 moved Gauhati High Court against the eviction late last month. The government, in response, filed an affidavit, saying the ‘settlers’ were on government land. The evictions in question came before the petitioners could file a reply.”

Offering a wider perspective, the report said: “It is clear that Muslim residents of the affected area are suffering under discriminatory labels of ‘illegality’ imposed by the government and Right-wing elements in the civil society. This narrative of being ‘infiltrators’, despite figuring in the NRC (National Register of Citizens), would make it difficult for them to settle anywhere in the state.”

During the release of the report at the Press Club of India on Monday, senior advocate Sanjay Hegde said: “The recent incidents show that the State is willing to use disproportionate force to quell protests, whether violent or peaceful. Rule of law is replaced by the rule of guns.”

Author Farah Naqvi said: “The Assam incident should not be seen in isolation. This is the manifestation of a systemic injection of hate across the country. We have crossed the Rubicon where acts of violence are from the state government itself and not from any mob.”

The APCR report quotes Aamir Hussain, the brother of Farid who was shot dead, as saying: “There is only one way to come home. He had no option but to go through the area. He was hit on his way back home.”

His father Khaliq, who was not among the evictees, fell unconscious when he saw his son’s body being brought by villagers on a horse cart.

Hoque, a father of three, was his household’s sole earner. The report said: “As Haque (the name is spelt Hoque in the Aadhaar card) and his family members were packing up, four-five policemen barged into his shade and started thrashing everyone, including women and children. Hasna Bano, the deceased’s niece, suffered a broken hand in the beating. She recounts that the police hit her from behind. This enraged Haque who took a bamboo and chased the cops, who surrounded and beat him up before shooting him dead.

“No representatives of the district administration or the state government have visited the aggrieved family as yet to console them and share their grief, leave aside offering a compensation.

“After Haque fell to the ground unconscious, Bijay Shankar Baniya, a photographer hired by the Darrang district administration to film the eviction, started stomping on his body in the presence of the heavy police force.”

‘Sarma is the most divisive CM in Assam’s history’