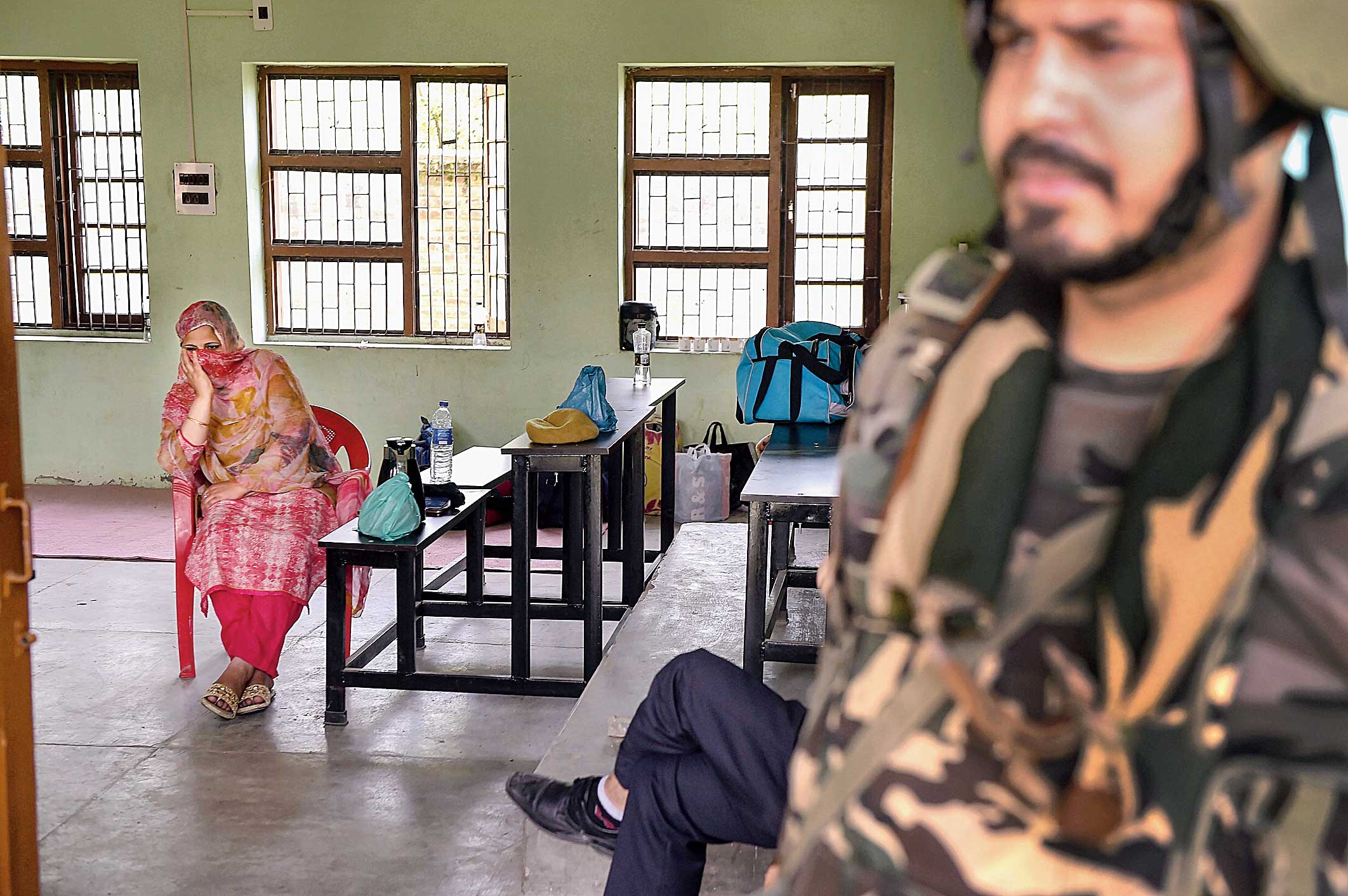 A security person stands guard as an election official waits for voters at a polling station in Anantnag on Tuesday.
(PTI)
Muzaffar Raina   |   Bamdoora (Anantnag)   |   Published 26.04.19, 02:29 AM

The Anantnag parliamentary seat in the Valley recorded its lowest turnout in decades on Tuesday but the reason may have its roots in a brief gunfight three years ago.

That July 8, 2016, encounter in Bamdoora in the house of Farooq Ahmad Wani didn’t just change the forest official’s life.

It affected the lives of more than a 100-odd relatives and hauled Kashmir to the brink of disaster, destroying lives. It was here that Hizb-ul Mujahideen poster boy Burhan Wani and two of his associates were killed that day. The cycle of unrest that followed claimed dozens of lives and left thousands injured, many of them permanently maimed.

Cut to April 2019, the Valley has still not recovered from those aftershocks. The proof lay in Tuesday’s turnout: only 13.6 per cent voted in the first leg of the election in the crucial Anantnag seat, which would vote again on April 29 and May 6 in a never-before three-phase poll. The corresponding figure was 40 per cent in 2014.

Few turned up at booths to vote in this remote Anantnag village on April 23, perhaps none from the extended Wani clan that lives in Kaw Mohalla of Bamdoora village, around 75km from Srinagar.

“Why should we vote?” asked Nisar Ahmad Wani, 48, forest official Farooq’s younger brother. “Did any politician come to our help when we needed it the most?”

The Wanis had to pay a heavy price for the July 8 encounter. Hundreds of youths from surrounding villages and far off, many of them masked and carrying petrol cans, had swarmed into the village four days later, torching house after house.

“We still don’t know why they did it? What was our fault? But they didn’t listen. In all, 13 houses were set ablaze, all of our relatives, leaving 150 people homeless,” Nisar, who stays in a shed near his under-construction house, said.

The mob suspected the family had tipped off the security forces about Burhan’s presence. One of the three militants killed in the gunfight was Sartaj, a close relative of Farooq.

Local people recalled that the forces had cordoned off the village in the afternoon of July 8. Burhan and his associates had rushed out, guns blazing. When the forces opened fire, one of the militants fell on the lawns of Farooq’s house; Burhan and the other militant on a dirt road outside.

The Wani clan’s ordeal didn’t end with the burning of their houses. Some relatives had given them shelter but villagers started a social boycott that lasted around a year.

“For months I didn’t go to the mosque for prayers. For around a year we didn’t dare to reconstruct our homes,” Nisar, who works as a part-time labourer, said. The families later sold their ancestral land.

Farooq’s daughter, who spoke to this correspondent from behind a curtain, said they have been living at her maternal uncle’s home in another village for the past six months.

“We are four sisters. My elder sister was in Class XII and had to discontinue her studies. I discontinued formal education and joined a seminary. Only my two younger sisters could continue their studies,” said the girl who didn’t give her name.

Pro-azadi sentiment remains strong in Anantnag, or south Kashmir constituency, which perhaps explains why the Election Commission announced a three-phase poll for the seat, the first such in the Valley.

Three districts in the constituency — Pulwama, Shopian and Kulgam — will vote in the next two phases on April 29 and May 6, when the turnout is expected to be even lower.

Former chief minister Mehbooba Mufti is contesting from the seat, once a bastion of her PDP. But the PDP’s decision to join hands with the BJP and Mehbooba’s iron-fist policy against protesters during the agitation that followed Burhan’s death has affected its popularity.

Mehbooba, who has since been dumped by her ally, is now trying to revive her party’s fortunes with pro-separatist statements.

Her main rivals are the National Conference’s Hasnain Masoodi and the Congress’s Ghulam Ahmad Mir.