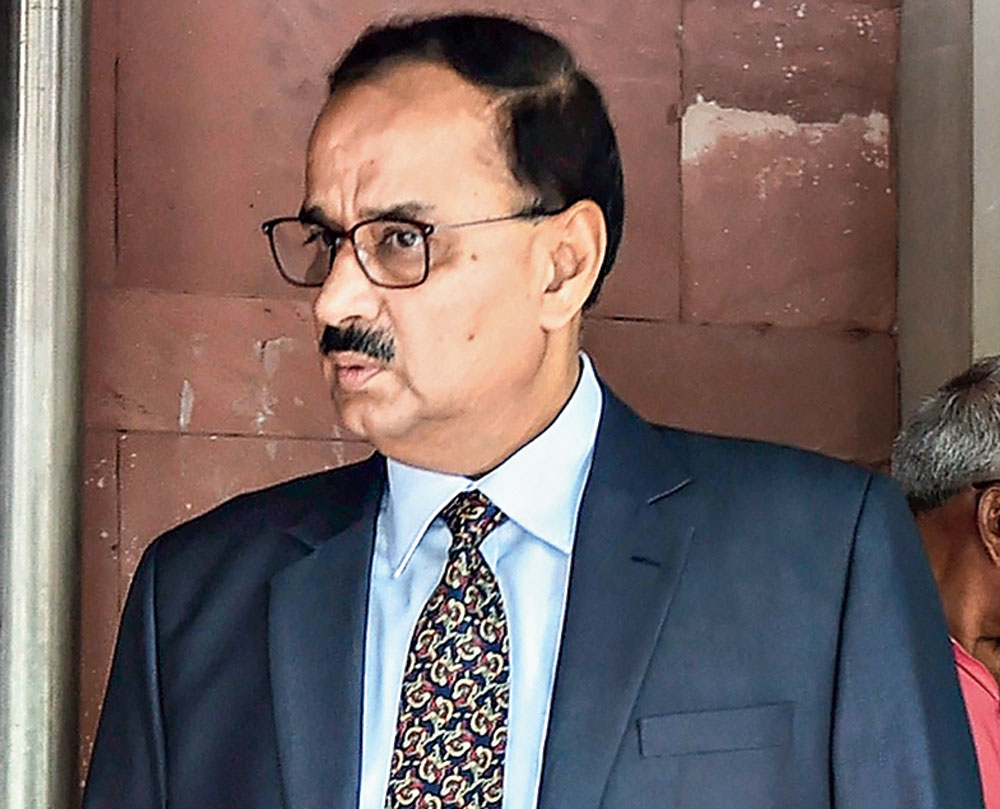 The court did not touch upon the displacement of Rakesh Asthana, Verma’s deputy and rival, as the CBI special director. Asthana’s petition seeking the quashing of a bribery case against him is pending in a Delhi court.

The bench ruled on petitions filed by Verma and Common Cause, an NGO, challenging the action against the CBI chief.

But the selection committee will have to decide within a week, after going through the contents of a sealed-cover report submitted by the CVC to the court, whether Verma should be exonerated or indicted. Any indictment will make Verma’s continuation untenable.

“We deem it proper to direct that… Verma, upon reinstatement, will cease and desist from taking any major policy decisions till the decision of the committee permitting such actions and decisions becomes available within the time frame indicated,” the court said.

It added: “We further make it explicit that the role of Verma… during the interregnum and in terms of this order will be confined only to the exercise of the ongoing routine functions without any fresh initiative, having no major policy or institutional implications.”

The court explained why no one should “intermingle or interfere” when it comes to the CBI chief. “The head of the institution, namely, the director, naturally, therefore, has to be the role model of independence and integrity, which can only be ensured by freedom from all kinds of control and interference except to the extent that Parliament may have intended.

“Such intendment, in our considered view, would require all authorities to keep away from intermingling or interfering in the functioning of the director,” said the 44-page judgment authored by Chief Justice Gogoi.

The court did mention the key ground on which a director could be removed by the selection committee. “In a situation where such interference may at all be called for, public interest must be writ large against the backdrop of the necessity.

“The relevance and adequacy of the reasons giving rise to such a compelling necessity can only be tested by the opinion of the committee (selection)… in whom the power to make recommendations for appointment of the director has been vested by Parliament.

“This alone can provide an adequate safeguard to ensure the independence of the office keeping in view the legislative intent, as found and held by us,” the apex court said.

PTI reported finance minister Arun Jaitley, himself a lawyer who had defended the displacement of Verma, as saying on Tuesday: “This action taken was perfectly bona fide as there were cross-allegations made by both the officers, and in accordance with recommendations of the CVC. The government felt that in the larger interest of fair and impartial investigation and credibility of CBI, the two officers must recuse themselves.”

The Supreme Court has quashed the orders to bench CBI director Alok Verma, dealing an unparalleled blow to the Narendra Modi government that sought solace in a rider that he should not take any major policy decision until an inquiry is over.

The order essentially means that the midnight operation, which led to raids at the CBI headquarters and the displacement of Verma at 1am on October 24 last year, stands discredited and annulled.

Although Verma will still have to clear the corruption charge against him and the court did not make any adverse remarks against the government, this is the first time in the country that the executive is being compelled by the judiciary to reinstate a CBI director.

The top court said a high-powered selection committee of the Prime Minister, the Chief Justice of India and the leader of the single largest Opposition party should take a decision on the vigilance probe against Verma in a week. His tenure is set to end on January 31.

Verma has been accused of taking bribes from a businessman for protecting him from investigation, a charge that has ignited a plethora of allegations against another CBI officer considered close to the political leadership.

The Centre had removed Verma on a directive from the Central Vigilance Commission (CVC) but the lightning operation had fuelled suspicion that the government wanted him out before he could initiate any action on the Rafale deal. Less than three weeks before the midnight operation, former BJP minister Arun Shourie and lawyer Prashant Bhushan had met Verma with a petition on the Rafale deal.

On Tuesday, the apex court categorically held that only the three-member selection committee could transfer or divest Verma of his powers, thus holding that neither the CVC nor the Centre had any authority to act against the CBI chief even if the incumbent faced allegations of corruption.

Both the CVC and the Centre had argued that the selection committee had no power to act against the CBI chief once he has been appointed by the panel. This argument has been rejected by the three-judge bench of Chief Justice Ranjan Gogoi and Justices Sanjay Kishan Kaul and K.M. Joseph.

The court said it was setting aside the following orders: