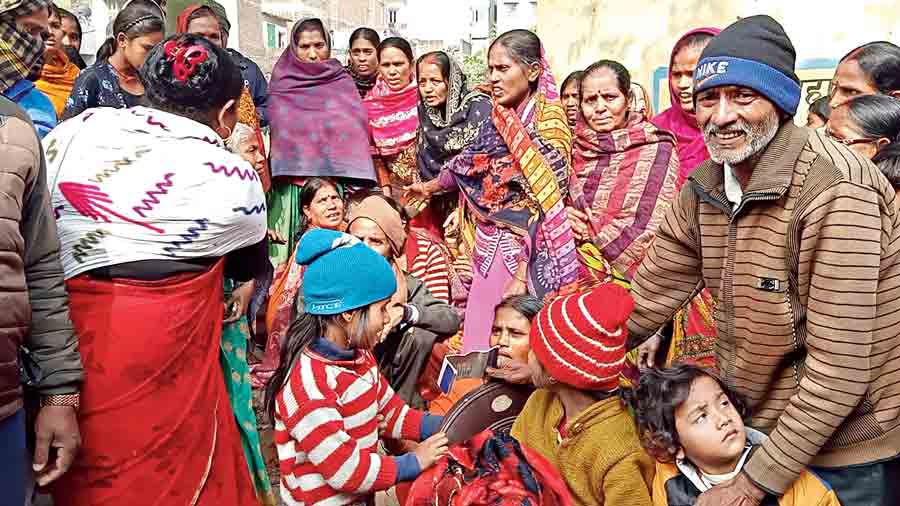 Bihar chief minister Nitish Kumar faced attacks from friends and foes alike after the hooch deaths in his native Nalanda district climbed to 12 on Sunday.

The toll may increase further as several people’s condition is critical. Two persons have lost their eyesight in the incident so far.

At least five more people succumbed to the after effects of spurious liquor consumption since Saturday evening, taking up the death toll in the incident from seven to 12, though the district administration said only 11 people have died.

The entire Chhoti Pahadi area under the Sohsarai police station resembled a fortress with the presence of a large number of police personnel. Door-to-door search operation to find illicit liquor was conducted, just like in terror or Naxal-infested areas.

“Prima facie hooch seems to be the reason behind the deaths. Post-mortem of the 11 deceased has been done and we will be able to say anything further only after the reports come. We have registered an FIR on the basis of the statements of the family members of the deceased. Five persons, all locals, have been arrested for their involvement in the hooch tragedy,” Nalanda SP Ashok Mishra told The Telegraph.

The Nalanda SP said that continuous raids in the area since Saturday morning has led to recovery of illicit liquor from three places and separate FIRs have been registered with regard to them. The excise department has also registered an FIR with regard to the hooch tragedy.

“It seems that liquor brewing and distribution was going on for a long time in the area where the deaths have occurred,” Mishra added.

Sohsarai station house officer Suresh Prasad has been suspended after the incident.
Mundrika Devi, whose son Prahlad Kumar died in the incident, alleged that two women used to sell country liquor in the area. “Everybody, including the mukhiya (panchayat chief) and the police knew about them, but nobody did anything,” she said.

Meanwhile, allies of chief minister Nitish Kumar’s Janata Dal United (JDU) appeared on the warpath over the hooch tragedy that has taken the deaths in such incidents to 121 in the last one year. Their frequency of such incidents has increased since November.

The BJP, the biggest partner in the ruling National Democratic Alliance (NDA) had termed prohibition as a failure and questioned the state government on Saturday for just taking action against the poor and the weak instead of arresting the liquor mafia, hit out again on Sunday.

“Will the state government now send the family members of the victims of the hooch tragedy to jail,” asked Bihar BJP president Sanjay Jaiswal, thereby pointing out to the flaws in the prohibition law.

“Those selling and consuming liquor should be punished, but they are just like multi-headed hydra. New ones will spring up if you cut them. If you want to weed out liquor, you will have to destroy the triangular nexus of the police, administration and mafia,” Jaiswal said.

The Bihar BJP chief called for the arrest of the administrative officials, who tried to mislead everybody on hooch deaths by blaming some mysterious disease as the reason, thereby revealing that it was in cahoots with the liquor mafia.

“The police of the area are also culprits because they allowed liquor to be sold publicly. They should be sent to jail for 10 years instead of just being suspended. These police personnel should be interrogated in a strict manner to find out and arrest the liquor mafia,” Jaiswal further said.

Another NDA partner, Hindustani Awam Morcha Secular (HAMS) of former chief minister Jitan Ram Manjhi, sought the repeal of the prohibition law in the aftermath of the hooch deaths.

“If the controversial agriculture laws could be repealed they why cannot the prohibition law in Bihar? The government should take it back. Poisonous liquor is being sold in the state due to the ban on liquor,” HAMS spokesperson Danish Rizwan said.

Opposition Rashtriya Janata Dal (RJD), which happens to be the largest party with 75 seats in the 243-member state legislative Assembly, demanded Nitish’s resignation from the post of the chief minister.

“So many people have died but Nitish is still in stupor. Prohibition has completely failed in the state. The administration is playing a big role in illicit liquor supply, but he is refusing to accept it. Ethically, he should resign from his post,” RJD spokesperson Shakti Singh Yadav said.

Meanwhile, the CPI-ML sent a group of its MLAs to conduct an enquiry into the Nalanda hooch incident and said, “the onus of the deaths due to liquor is on the chief minister”.

Prohibition was imposed in Bihar in April 2016, but the flow of liquor never stopped.