Advertisement
Home / India / All MPs, from ruling party or Opposition, defenders of dignity of Parliament: President

All MPs, from ruling party or Opposition, defenders of dignity of Parliament: President

The Opposition is, in fact, the most important element of democracy, Ram Nath Kovind says at the Constitution Day celebrations 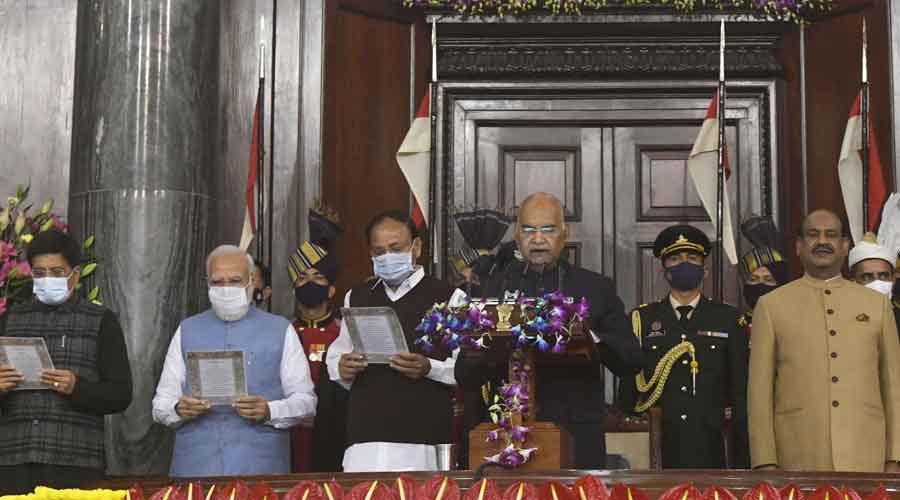 President Ram Nath Kovind on Friday said all MPs, whether representing the ruling party or the Opposition, are defenders of the dignity of Parliament and competition should not be confused with rivalry.

Addressing the Constitution Day celebrations here, he said there may be differences of opinion but no difference should be so great as to hinder the real purpose of public service.

"The Opposition is, in fact, the most important element of democracy," he said.

"Without an effective Opposition, democracy becomes ineffective. It is expected that the government and the Opposition, despite their differences, continue to work together in the best interests of the citizens. Our constitution makers had envisioned this and it is also necessary for nation-building," he said.

Kovind said it is natural for members of the ruling party and the Opposition to compete but this competition should be about being better representatives and doing better things for the public good.

"Only then will it be considered healthy competition," he said, adding that the competition in Parliament should not be confused with rivalry.

"We all believe that our Parliament is a 'Temple of Democracy'. Therefore, it becomes the responsibility of every parliamentarian to conduct themselves in this temple of democracy with the same spirit of reverence with which they do in their places of worship," Kovind said.

"All Members of Parliament are defenders of the dignity of the Parliament, whether they represent the ruling party or the opposition," he said at the event organised by the Indian Parliamentary Group in the Central Hall of Parliament House.

He said elected representatives of the Gram Sabha, the Vidhan Sabha and the Parliament should have only one priority.

That singular priority lies in working for the welfare of all the people of their constituencies and for the interest of the nation, Kovind was quoted as saying in a statement issued by the Rashtrapati Bhavan.

Kovind said that if MPs look at their responsibility as an extension of the ideals of the freedom struggle, they would remain mindful of their duty towards strengthening the legacy of the framers of the Constitution.

If they realise that they are occupying the places where once our constitution makers used to sit, they would naturally feel a deep sense of history and sense of duty, Kovind said.

"With the digital version of the debates made available, people in the country as well as in the whole world, especially the younger generation, would get to know about the greatness and potential of India and would also get guidance for the future," he said.

"The initiative to conduct an online quiz on the subject of constitutional democracy would be very effective in promoting constitutional values among our citizens, especially the younger generation, the statement said.

Kovind said, "We have recently observed the year-long 150th birth anniversary celebrations of the Father of the Nation, Mahatma Gandhi. We are now celebrating the 75th anniversary of our Independence. It is a matter of happiness for all of us that people from all over the country are actively participating in various programs organised as part of 'Azadi Ka Amrit Mahotsav. It is evident from the enthusiasm of ordinary citizens that they carry within their hearts deep respect for those known and unknown freedom fighters whose sacrifices made it possible for us to breathe the air of freedom."

He urged all to rededicate themselves to follow those great national ideals in our daily lives.

Kovind said that by following these ideals, we would further enhance our stature on the world stage and would be equipped to face any challenge effectively.