Social harmony is in danger as the BJP government is working with a revenge mentality, says the Samajwadi Party's chief spokesperson 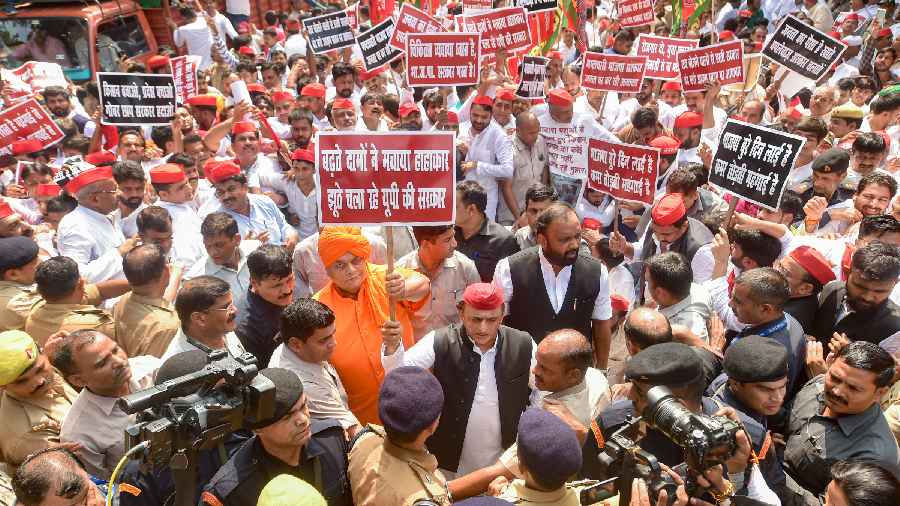 Samajwadi Party President Akhilesh Yadav being stopped by police during a march from party office to UP Vidhan Bhavan
PTI picture
Our Web Desk   |   Lucknow   |   Published 19.09.22, 11:28 AM

The Uttar Pradesh police stopped Akhilesh Yadav and his party members from marching to the Vidhan Bhavan raising various issues concerning the people before the beginning of the Monsoon Session of the state legislature, reports ndtv.com

The Samajwadi Party leader, who was leading the march, managed to cover 100 meters before being met with police barricades.

Akhilesh Yadav and other party leaders on Monday led a march to the State Assembly from their party office against price rise and lawlessness in the Yogi Adityanath-led government in Uttar Pradesh.

"Party MLAs and MLCs will highlight issues of unemployment, price rise, crime against women and poor law and order situation in the state in its march," the SP's chief spokesperson Rajendra Chaudhary said.

Social harmony is in danger as the BJP government is working with a "revenge mentality". Contrary to the spirit of democracy, the BJP is doing "politics of hate", he alleged.

However, the BJP hit back the party saying necessary permissions were not taken and the party strayed from the allotted route.

"There is no harm if any party asks their questions in a democratic way. Samajwadi Party should take permission for any procession which should not harm anyone. Following law and order is too much of an expectation from Samajwadi Party leaders," Chief Minister Yogi Adityanath said.

"They hadn't taken permission. Still, they were assigned a designated route which wouldn't have caused traffic congestion. They refused to take that. We've no option but to stop them here. If they take the designated route, there won't be a problem," said Joint Commissioner of Police (Law & Order) Piyush Mordia.

Meanwhile, Uttar Pradesh Deputy CM K P Maurya in a sharp retort called the SP "jobless and left with "nothing to do"

"SP's protest is not related to the benefit of common people. If they want to discuss this, they are free to do it in the Assembly. Our government is ready for discussions. Samajwadi Party is jobless now, they've nothing to do. Such protests will only create problems for people" he said.

The march began from the SP office and would pass through Raj Bhavan and the Gandhi statue located near the General Post Office before culminating at the Vidhan Bhavan.

Police personnel were stationed outside the SP office and the residences of its leaders in Lucknow hours before the scheduled protest. Heavy police deployment was also visible near the Legislative Assembly in Hazratganj.

The protest was scheduled to start in front of the statue of former prime minister Chaudhary Charan Singh on the Assembly premises.

The police personnel deployed outside the SP office stopped the party's leaders from reaching the Legislative Assembly for the protest. They were instead taken to Eco-Garden.