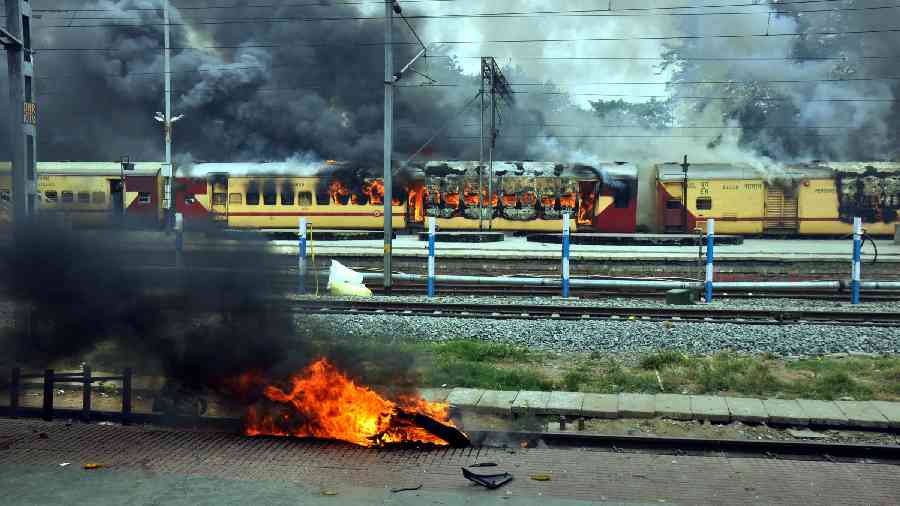 Raising slogans 'Bharat Mata ki Jai' and 'Agnipath Vapas Lo', youths protesting against the Centre's new scheme to recruit soldiers on Friday set a bogey of an empty train on fire and vandalised a few other trains here, prompting the police to lathicharge them.

The protests also compelled the Railways to cancel several trains and postpone some as a precautionary measure.

Officials said the protesters also erected barriers on the Agra-Lucknow Expressway to stop buses and pelted stones at them while the traffic also briefly came to a standstill on the Yamuna Expressway.

Police sources said that the protesters gathered at the Veer Lorik Stadium here and then marched to the Ballia railway station.

A video of the youths raising slogans and vandalising the Ballia-Varanasi Memu and Ballia-Shahganj trains has gone viral.

They also allegedly pelted stones near the railway godown and targeted private shops at the railway station platform. Buses outside were targeted too, sources said.

District Magistrate Saumya Agarwal said, "Considering the possibility of youths protesting, police was deployed from the morning itself. Some unruly youths came and tried to pelt stones, but the administration did not allow them to succeed. One portion of Ballia railway station was vandalised. Action is being taken against the unruly elements."

Superintendent of Police Raj Karan Nayyar said that the youths are being persuaded to call off the protest and sent back.

"The incident has been videographed. So far, no arrests have been made," he said.

Four buses were damaged due to stone pelting on the Agra-Lucknow Expressway, according to officials.

Superintendent of Police (rural) Akhilesh Narayan said, "At around 7 am, on the Agra-Lucknow Expressway, under Matsena police station, some unruly elements came on the Agra-Lucknow Expressway and they erected barriers of UPEIDA (Uttar Pradesh Expressways Industrial Development Authority) and vandalised around four buses. This created panic among the passengers. However, the passengers were provided alternative buses, and they left for their respective destinations."

The unruly elements are from nearby villages and they are being identified, the SP added.

Scores of youngsters descended on Yamuna Expressway and blocked traffic movement briefly, officials said. The movement through Jewar toll plaza between Greater Noida and Mathura-Agra was blocked for around an hour from 12 pm, officials said.

In Varanasi, youths raised anti-government slogans at the Cantonment Railway Station and damaged buses and carts outside.

As the police force chased them, they ran towards the Mahatma Gandhi Kashi Vidyapeeth and pelted stones, officials said.

The youths also damaged buses outside the DRM office in Lahartara area of the city.

Police Commissioner A Satish Ganesh, who visit the venue, said that an appeal has been made to those trying to take law into their own hands to maintain peace.

"If they do not follow (the appeal), then action as per the law will be taken against them," he said.

In Amethi too, youths staged a protest against the Agnipath scheme and blocked the Amethi-Durgapur road. Police and the district administration faced a tough time in removing the blockade. The Amethi-Pratapgarh road was also blocked, they said.

As protests snowballed, the North-Eastern Railways, North-Central Railways and Northern Railways cancelled some trains while they stopped few others.

About the empty train stationed at the washing pit in Ballia that was set afire, Public Relations Officer (PRO) of North-Eastern Railways Pankaj Singh told PTI that the fire was immediately controlled and there was no "major loss".

Apart from this, 15 trains have been stopped at various railway stations, and they will resume their journey towards their respective destinations once the situation improves.

PRO of North-Central Railways Amit Malviya said, "Reports of damage done to any train under the NCR have not come so far. Around half-a-dozen trains have been stopped at various places, and as the situation is becoming normal, the trains are being sent towards their respective destinations."

Malviya informed that no train of the NCR has been cancelled.

Roadways buses have been torched near Tappal in Aligarh, while as many as 100 persons have been held in Ballia district in Uttar Pradesh. The arrests happened for vandalising two trains, pelting stones, setting a compartment of train on fire during protest against Agniveer this morning.

Protests have erupted in several states since Wednesday against the Agnipath scheme to recruit jawans into the army, the navy and the air force for a four-year-period followed by compulsory retirement for most without gratuity and pension benefits.