One dead, over 15 injured in violent as police fire in air to disperse agitators 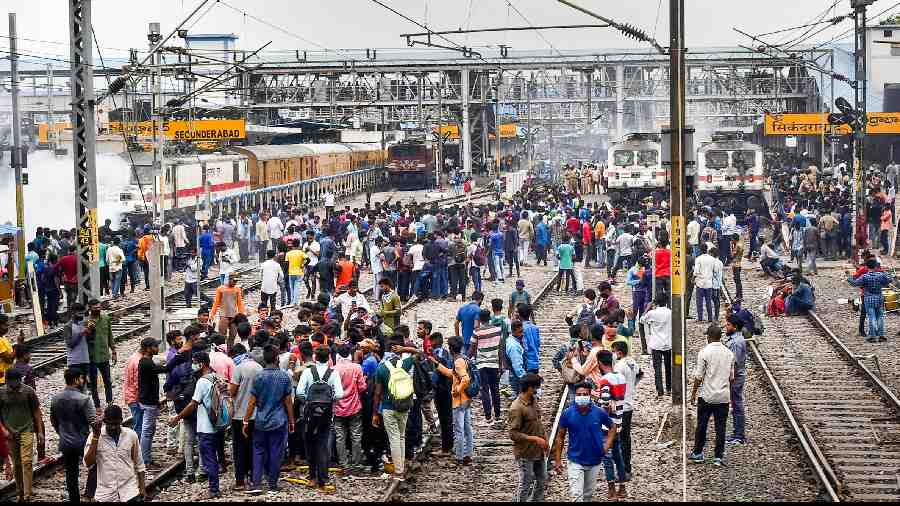 A mob vandalises trains and railway properties at the Secunderabad Railway Station in protest against the Central government’s ‘Agnipath’ scheme, near Hyderabad
PTI picture
Our Bureau, PTI   |   Hyderabad   |   Published 17.06.22, 01:14 PM

The protest against the Centre's 'Agnipath' scheme relating to recruitment in the armed forces spread to the South on Friday when unidentified miscreants went on the rampage at the Secunderabad Railway station here, setting on fire a parcel coach of a passenger train.

One person was killed, while over 15 others were critically injured after the police opened fire to control an angry mob that went berserk at the Secunderabad railway station on Friday in protest against the Union defence ministry’s new ‘Agnipath’ scheme.

According to a senior official of South Central Railway, the agitators set on fire some coaches of three passenger trains and none of the passengers was hurt in the incidents.

"There was an incident (of firing), to control them and some firing also happened," the official told PTI.

Tension prevailed at Secunderabad Railway station and in the vicinity as people ran helter-skelter in the wake of the protest. Shops near the railway station were shut.

The agitators, numbering about 300-350, pelted stones and set a parcel coach of a passenger train on fire, they said.

Some stalls in the railway station suffered damage, they said.

The agitators pulled out cargo from the parcel coach and dumped it on the tracks and set fire leading to disruption of some train services.

The identity of the agitators was yet to be established, they said.

There were widespread protests in some parts of the country on Thursday demanding the centre to roll back 'Agnipath' scheme unveiled by the Ministry of Defence which is a pan-India merit-based recruitment scheme for enrolling soldiers, airmen and sailors. Trains were set afire, public and police vehicles attacked and personnel injured as protests over 'Agnipath' snowballed and swept across several states including Uttar Pradesh and Bihar on Thursday.

Under the scheme, young persons will be provided an opportunity to serve in the armed forces as 'Agniveer' for a period of four years, including training period.