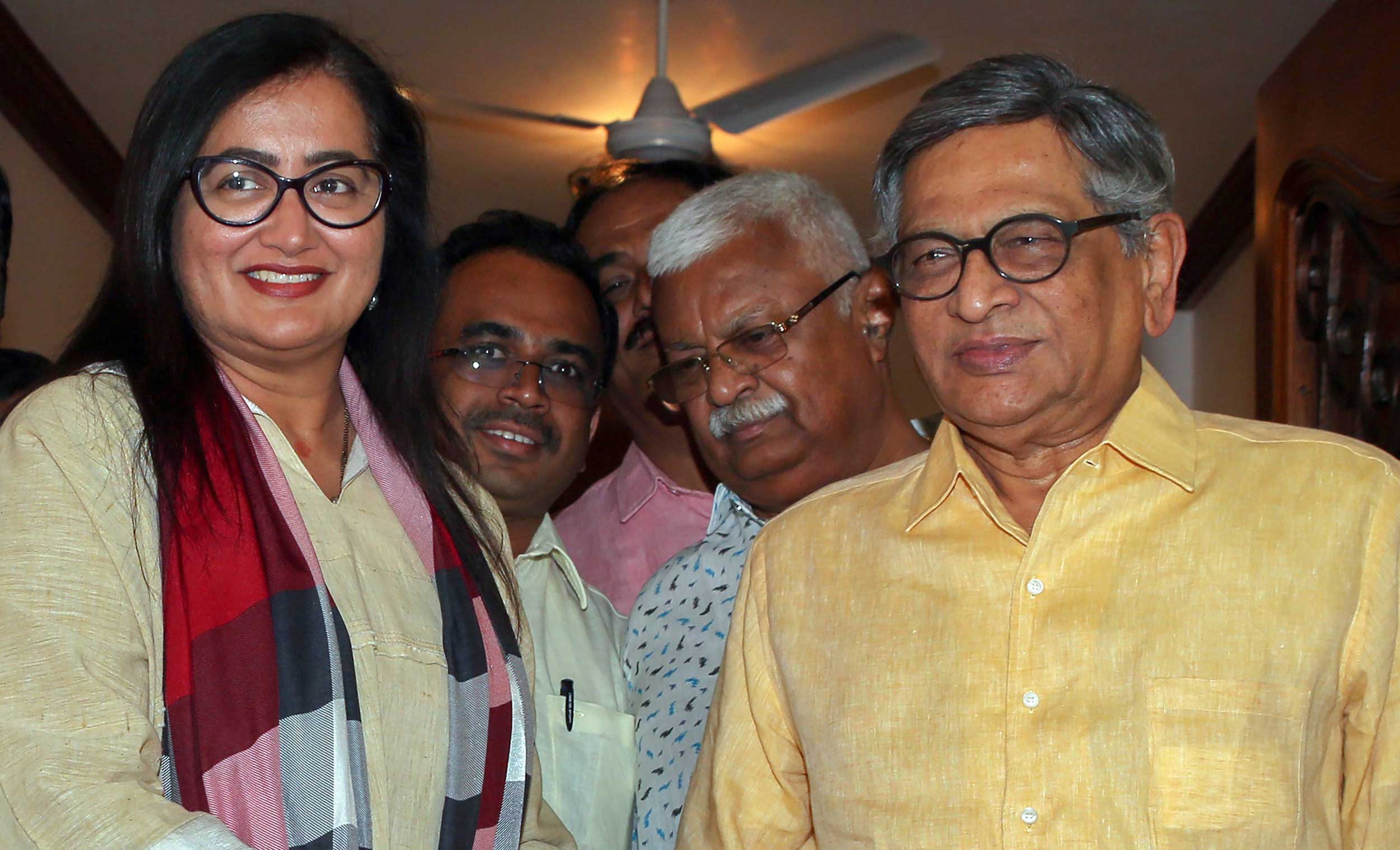 Film stars are usually star campaigners for political parties in an election season. But one yesteryear star has left the Congress-Janata Dal Secular ruling alliance in Karnataka with a headache following her decision to take the plunge and contest against them.

Sumalatha, once a hugely popular actress, is bent on contesting from Mandya — the constituency where chief minister H.D. Kumaraswamy is launching his actor-son Nikhil Gowda.

The entry of Sumalatha has upset the alliance calculations in a seat where the Congress and the JDS both enjoy equal influence and had been considered a cakewalk for Nikhil.

Sumalatha, widow of actor-turned-Congress leader Ambareesh, had knocked on the doors of many Congress leaders with the request to let her contest from her husband’s turf.

But the Congress was in no mood to let a political novice like her contest from the prestigious agricultural belt. That apart they had already struck a deal with former Prime Minister and JDS national president H.D. Deve Gowda to let his grandchildren contest from Mandya and his home turf, Hassan.

Carefully timed “leaks” from the BJP indicate the possibility of the party supporting Sumalatha, who could get a good chunk of the Vokkaliga votes her husband had nurtured.

Sumalatha met BJP veteran and former Congress leader S.M. Krishna at his home on Friday in a well-orchestrated move. With enough eyeballs on local television channels, she has started campaigning in Mandya.

Nikhil too has hit the campaign trial with a temple run in the district.

The BJP has kept the alliance partners on tenterhooks on whether it would extend support to Sumalatha.

Krishna had given a cryptic reply to reporters after meeting Sumalatha.

“When she decides we will decide,” the veteran quipped, leaving everyone guessing about the BJP’s move.

One Congress leader, however, played down the whole drama. “She doesn’t have enough strength to take on the alliance candidate as the Congress and the JDS enjoy almost equal support in Mandya,” the state Congress functionary said.

In 2014, JDS nominee C.S. Puttaraju had won the seat by a slender margin of 5,518 votes. Now that the first- and the second-placed parties are a team, there is no major worry of losing Mandya.

But the functionary admitted a possible “dent” in the party’s image ahead of the April-May Lok Sabha elections.

“It could dent our image if Sumalatha joins the BJP. Such a move could even confuse Mandya’s voters who are simple village folks. In that case we will have to redirect a lot of resources from other places to Mandya to educate the voters,” he said.

Political analyst Mahadev Prakash saw an even more intriguing situation for Nikhil because of the influence of Congress leader P.C. Siddaramaiah over his Kuruba community voters in Mandya, a prestigious constituency in the Vokkaliga belt.

“There are more than two lakh Kurubas in Mandya. We all know that Siddaramaiah often acts in his own interest. He doesn’t gel well with the Gowda family,” Prakash said.

“Siddaramaiah is a man who never forgets enemies. I fear he would try and pull the rug by getting the Kurubas to vote for some Independent (candidate) or (opt for the) Nota (none of the above option) in large numbers just to hurt the Gowdas.”