A slap in the face of Sanghis, says JNU student Najeeb's mother 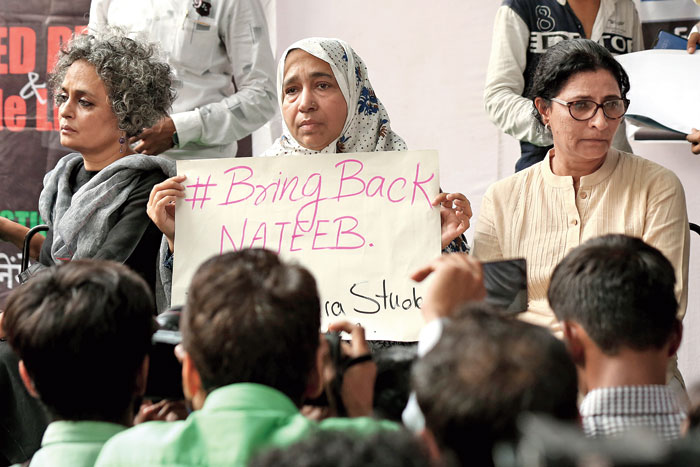 The mother of a JNU student who was reported missing after a clash on campus in 2016 shared a stage with relatives of victims of murders linked to Hindutva groups on Tuesday.

At a public meeting to mark the third anniversary of the day her son Najeeb Ahmed was reported missing after a clash with supporters of the Akhil Bharatiya Vidyarthi Parishad, Fatima Nafis demanded justice.

Along with Nafis were the sister of slain journalist Gauri Lankesh and the wife of Jharkhand mob violence victim Tabrez Ansari.

At the meeting on Jantar Mantar road, Nafis said: “I am fortunate that all of you, my children, have done your duty to stand with me and say that I am not alone. This is a slap in the face of the Sanghis. The only thing the government is scared of are the youths who will be the leaders of tomorrow. Those who call themselves nationalists are selling airports and the railways and destroying institutions. The only people stopping them are the youths.”

Last year, the CBI closed its investigation into the disappearance of Najeeb.

The killers of all four rationalists are suspected to be linked.

Ansari died in police custody after being assaulted by a mob which made him chant “Jai Shri Ram” in Jharkhand in June this year. His 19-year-old wife Shaista Parveen had a miscarriage during his custody on unproven charges of theft.

She said: “I have been running from pillar to post and have come all the way from Jharkhand to demand justice for my husband. Modiji, please grant us justice.”