A difficult decision, steered with skill 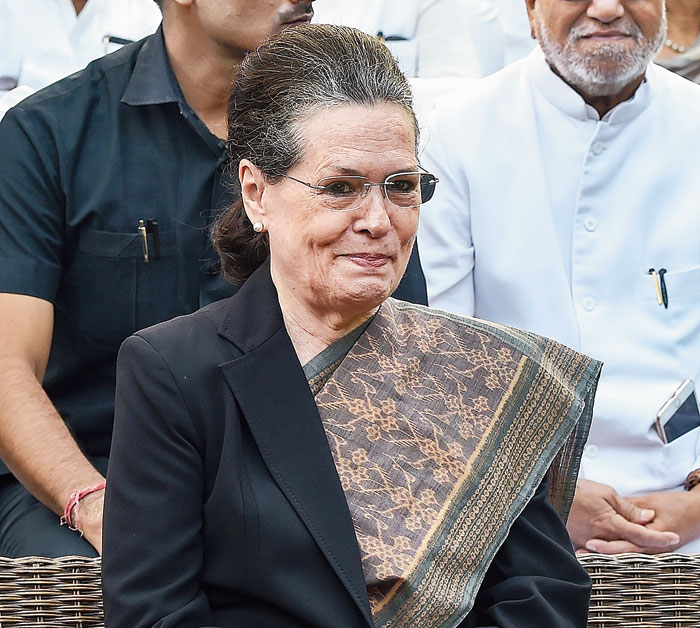 The unanimous endorsement by the Congress Working Committee on Thursday morning of the exceptional decision to align with ideological rival Shiv Sena to form a government in Maharashtra added a feather to Sonia Gandhi’s leadership that has navigated the organisation through more political storms than any other party president.

While Sonia herself was in a dilemma, the stiff opposition from many important leaders, particularly her trusted lieutenant A.K. Antony, complicated the task but she handled it with an open mind and went by the democratic principle of majority will. She gave the party enough space and time to harmonise conflicting views to arrive at the pragmatic decision without any internal fracas.

“It was not an easy process. Aligning with Sena might have been one of the most difficult decisions of her life,” a close aide told The Telegraph, pointing to her political maturity. She has learnt the ropes during the most tumultuous phase of Indian politics when the traditional communal-secular divide kept acquiring newer dimensions through the BJP’s progression from Vajpayee-Advani era to the Modi-Shah duopoly.

But Sonia is accustomed to dealing with tough situations; she reluctantly entered politics several years after her husband’s assassination and led the party to power when no one expected it; sewed up a coalition that included Sharad Pawar, who had split the Congress over her foreign origin, and the DMK, whose government was indicted by the Rajiv Gandhi assassination inquiry for allowing unchecked the LTTE’s activities. Finally, she showed her mettle by turning down the Prime Minister’s post in favour of Manmohan Singh.

Even her new tenure as Congress president has come under extraordinary circumstances after her son Rahul Gandhi quit, owning responsibility for the humiliating general election defeat, leaving the party rudderless at its most difficult time. The Congress was staring at disintegration when she accepted the challenge to steer the sinking ship.

This decision on Sena had to be taken under abnormal circumstances — when the Narendra Modi-Amit Shah enjoy absolute dominance over India’s polity, the mandate was not in favour of the Opposition, the Supreme Court verdict on the Ram temple came as a big gift to the Hindutva forces, the entire Opposition appears to have gone into hiding and when the government had withdrawn SPG security from the family that has been through two assassinations.

But Sonia, helped by family loyalist Ahmed Patel, demonstrated the courage to risk taking a decision whose political ramifications are not clearly visible at this stage.

The inflexible stand of the Maharashtra MLAs, who were insistent that a government should be formed, might have goaded her to think differently. Unlike Rahul, Sonia has often relied on realpolitik instead of taking a rigid moral stand. It was she who pushed the Congress to align with the JDS in Karnataka to keep the BJP out.

Decks are clear now for the installation of a Sena-NCP-Congress government. It has been decided that the Congress will join the government and the common minimum programme has been finalised. Congress and NCP leaders confirmed after the second meeting on Thursday afternoon that a “consensus” had evolved on forming the government with Sena. The formal announcement will come after a discussion with Uddhav Thackeray in Mumbai on Friday, they said.

At Friday’s meeting, while Thackeray has to put his seal on the common minimum programme, the main agenda is portfolio distribution. While the Sena and NCP are expected to get 15 ministers each, the Congress will get 12 ministers and the Speaker’s post.

It will not mention the word “secular” — sought to be mischievously inserted by a top NCP leader to provoke the Sena — but it will spell out that decisions will be taken on the basis of constitutional principles, which allow no discrimination on the grounds of caste and religion.

While Thackeray is most likely to be the chief minister for five years, luck might smile on party leader Eknath Shinde if the Sena chief declines to hold the post.

From the Congress, the deputy chief minister could be chosen from among Balasaheb Thorat, Prithviraj Chavan and Ashok Chavan. Ajit Pawar will most likely be the NCP’s nominee.

The three parties are likely to approach the governor on Saturday to stake claim.