Young and in sari, transgender women pray at Sabarimala

Trupti, Avantika, Renju and Ananya were initially sent back for refusing to change into male attire 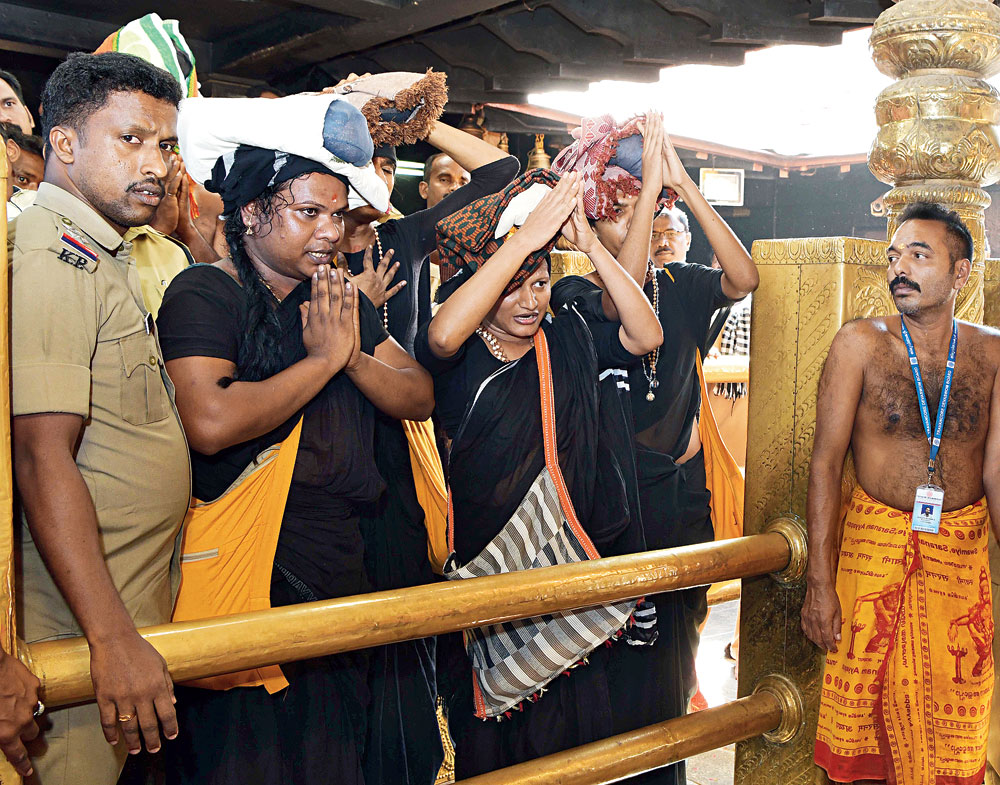 Four young transgender people, who had earlier been turned back on their way to the Sabarimala temple for refusing to change into male attire, prayed at the Kerala shrine on Tuesday morning — dressed in black saris traditionally worn by women pilgrims.

Trupti, Avantika, Renju and Ananya — all in their thirties — began their trek around 8am and reached the temple around 10.30am under police escort.

The police later escorted the four back.

“Police (on Sunday) wanted us to change into male clothes. But we refused because it is our constitutional right to wear what we want,” Trupti told reporters later.

Temple authorities have traditionally denied entry to women aged between 10 and 50 in the belief that anyone of childbearing age would disturb the “celibate” deity Ayyappan, but transgender people have always been allowed to enter.

Trupti, for instance, was making her second trip to the temple. It was Avantika’s third visit and the 14th for Renju. Only Ananya, they said, made her maiden pilgrimage to the hill shrine on Tuesday.

The concerns, however, were different this year with Sangh parivar affiliates bent on foiling the Left-led state government’s decision to enforce the Supreme Court’s September 28 order that lifted all age restrictions on women pilgrims.

Most of these groups have stationed volunteers along the route to the temple to keep a close watch on any woman who appears younger than 50.

There have been instances when women above 50 were targeted because they looked younger.

Shyama S. Prabha, state coordinator of the Kerala Transgender Cell that works under the social justice department, lauded the quartet’s visit to Sabarimala.

“Transwomen have always entered the Sabarimala temple, but things are a bit different this time due to the tension created by several groups,” Prabha told The Telegraph.

“I have visited Sabarimala thrice and want to go and pray there without any hindrance.”

The Kochi Metro was the country’s first to employ 23 transgender people.

But on Sunday, a police team guarding the base camp at Erumeli, about 60km from the temple, didn’t allow the four pilgrims to proceed further after they refused to dress like men because of potential law-and-order issues.

The four had later complained about police harassment and on Monday approached director-general of police A. Hemachandran, a member of the three-man supervisory panel Kerala High Court has appointed.

Hemachandran had referred the matter to officers in charge of security at the temple. The temple’s head priest and the Pandalam family, former royals who once ran the temple, told the police they had no issues with transgender people entering the temple.The police then decided to escort the four to the temple and back, just in case the volunteers of the Sangh affiliates got aggressive.

Asked if the social justice department would take up what happened on Sunday, Prabha said the police response that day reflected the tension whipped up in the name of women’s entry into the temple.

“The policemen were perhaps a bit too cautious since any young person wearing women’s clothes could be a target. With these transwomen aged in their thirties, there was definitely a risk,” Prabha said.

Ayyappa’s devotees are not restricted to one religion or gender