Advertisement
Home / India / 3 beaten up for carrying beef in MP, cops arrest them and 5 attackers

3 beaten up for carrying beef in MP, cops arrest them and 5 attackers

The police seized 140 kg red meat, suspected to be beef, from the trio 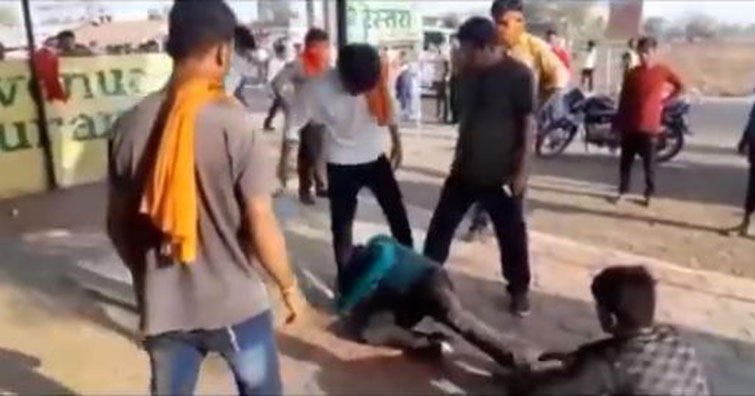 Suspected cow vigilantes thrashed three persons in Madhya Pradesh's Seoni for allegedly carrying beef, following which the police arrested the assailants as well as the victims of the attack.

Police said the three persons, who were beaten up, were arrested on May 22 as possession, transportation or sale of beef is illegal in Madhya Pradesh.

A group of five 'gau rakshaks' had allegedly beaten up two men with sticks and then forced one of them to thrash a woman accompanying them with chappals, a police officer said.

In a purported video clip of the incident, which has been widely circulated on social media, the five accused can be seen beating up the two men.

Later, the assailants also forced one of the men to beat up the woman accompanying them.

The attackers also forced one of them to chant 'Jai Sri Ram' , as seen in the video.

According to the police, the incident occurred on May 22 on Mandla Road under Dunda Seoni police station limits.

Seoni Superintendent of Police Lalit Shakyawar said an FIR has been registered against the five persons at Dunda Seoni police station, and all of them have been arrested.

Shakyawar said that police received information that some persons had uploaded a video of the attack on social media on May 23.

'Police took cognisance immediately and got the video removed from these social media platforms. Later, a police team arrested all the five attackers after identifying them,' he said.

The accused have been booked under sections 341 (wrongful restraint), 294 (obscene act), 323 (voluntarily causing hurt), and 34 (act done by several persons with common intention) of the Indian Penal Code (IPC) and under Arms Act.

The SP said police seized 140 kg red meat, suspected to be beef, from the trio. Police also seized a three-wheeler and a scooter from them.

The trio, who have been booked under the Madhya Pradesh Govansh Vadh Pratishedh Adhiniyam, were produced before a local court on May 23 which sent them to judicial custody.

Dunda Seoni police station in-charge GS Uike said the three persons who were beaten up did not sustain any serious injuries in the attack.

'The accused persons shot videos of the thrashing. Police reached the spot after the incident and brought the trio along with the meat they were carrying to the police station,' he said.