29 killed, 18 injured after bus falls from bridge in Uttar Pradesh

Mamata among those who tweeted condolence messages 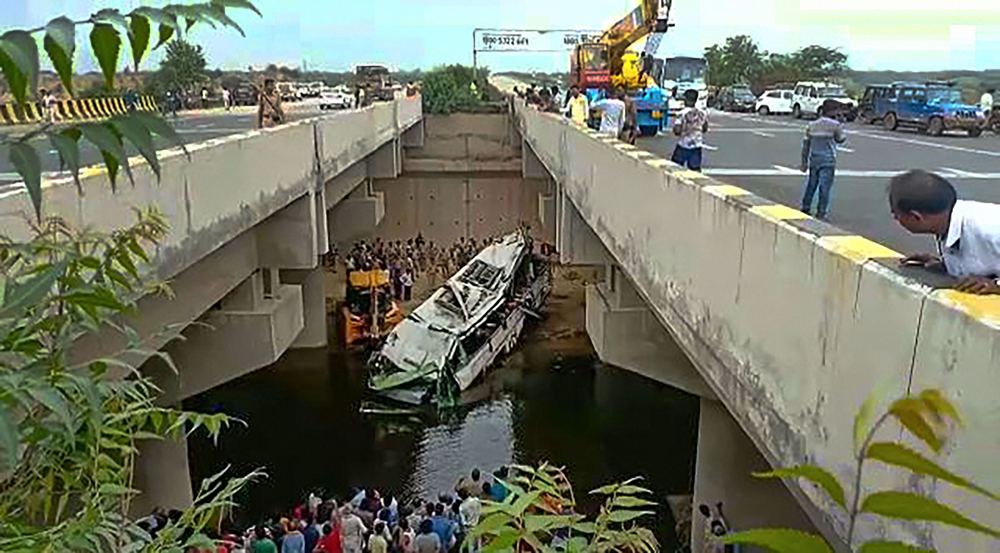 Twenty-nine people were killed and 18 injured after a state-run bus skidded off the Yamuna Expressway and fell into a large drain in Uttar Pradesh on Monday, officials said.

The bus was on its way from Lucknow to Delhi and had at least 50 passengers on board, the officials said.

Chief minister Yogi Adityanath has formed a committee to probe the reasons behind the accident and directed it to submit a report, the additional chief secretary (information), Awanish Awasthi, said.

“As per the district magistrate (of Agra), 29 persons have died. The bus fell into a nallah (drain),” he said.

The Uttar Pradesh Roadways will pay ex gratia of Rs 5 lakh to the next of kin of the deceased, the officials said.

The officials said the bus fell from a bridge and into an overflowing drain near Etmadpur. The gushing water is making it difficult to conduct rescue operations, they said.

“DGP UP OP Singh has directed to carry out relief & rescue work in full swing and is supervising it personally. All senior officers present at the spot (sic),” the state police tweeted.

The Janrath bus of the Uttar Pradesh Roadways’ Awadh Depot was going from Lucknow to the national capital’s Anand Vihar ISBT, the officials said.

The chief minister expressed his condolences and has directed the Agra district magistrate and senior superintendent of police to ensure the injured get proper medical treatment, the officials said.

He has asked his deputy, Dinesh Sharma, and minister of state for transport Swatantra Dev Singh to immediately visit the accident site.

Pained by the bus accident in Agra, Uttar Pradesh. Condolences to the families who have lost their loved ones. I pray that those injured recover fast. The State Government and local administration are providing all possible assistance to the affected.

The committee, comprising the transport commissioner, divisional commissioner and an inspector general of police, will investigate the incident in 24 hours, the chief minister has directed.

The probe panel will give a report on the cause of the accident and also suggest long-term measures to avoid such mishaps, Awasthi said.

“I convey my condolences and pray for the speedy recovery of those injured. I have spoken to CM Yogi Adityanath about it. He has sent Deputy CM Dinesh Sharma and Transport Minister Swatantra Dev Singh to the spot,” he said.

Bengal chief minister Mamata Banerjee condoled the death of the 29 passengers. “Saddened to hear about the tragic loss of lives because of another bus accident, this time near Agra. My heartfelt condolences to the grieving families. I wish the injured a speedy recovery. Let us all follow #SafeDriveSaveLife” she tweeted.