'Relief, rehabilitation should be the topmost priority' 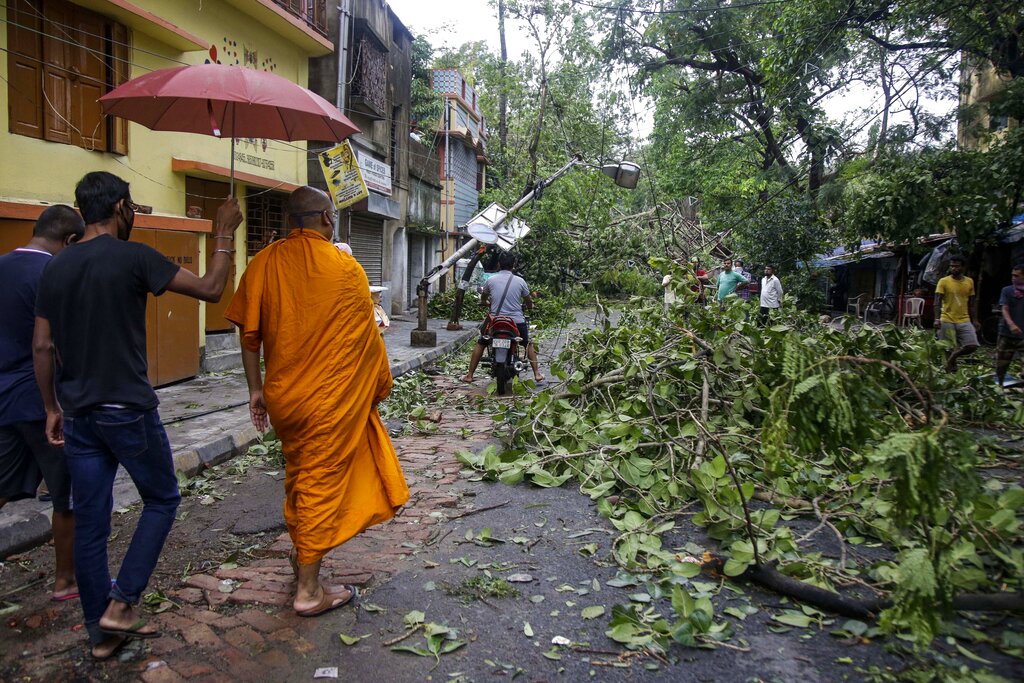 Twenty-two Opposition parties urged the Centre on Friday to immediately declare the devastation caused by Cyclone Amphan in Odisha and West Bengal as a national calamity and called for substantially helping the two states in facing the impact of the disaster.

The leaders of the 22 parties, who met through video-conferencing, passed a resolution in this regard and said relief and rehabilitation should be the topmost priority at this juncture.

'We, the Opposition parties, extend our sympathy and support to the governments and people of West Bengal and Odisha in meeting the impact of the devastation caused by cyclone Amphan,' the resolution said.

It said a natural calamity like cyclone Amphan has come as a double blow to the states amid the coronavirus pandemic, breaking the spirits of people.

'Opposition parties, therefore, urge the central government to immediately declare this as a national calamity and substantially help the states in facing the impact of this disaster,' the resolution said.

It added that the people of Odisha and West Bengal urgently need the support and solidarity of the governments and citizens of the country.

Noting that relief and rehabilitation should be the topmost priority at this juncture, the resolution said the possibility of an outbreak of other diseases as a result of the calamity must also not be ignored.

'We, the Opposition parties, call upon the central government to provide urgent help to our fellow citizens/countrymen,' it said.

During the meeting, the leaders conveyed their deepest condolences to the families of those who lost their lives due to the cyclone.

'We express our solidarity and sympathies with the pain of those who have suffered other losses. The country and its people are already in the midst of a grim struggle for survival combating the Covid-19 pandemic,' they said.

The meeting called by Congress chief Sonia Gandhi was attended by the leaders of the Trinamul Congress (TMC), Nationalist Congress Party (NCP), Dravida Munnetra Kazhagam (DMK) and Left parties, among others.

Govt has abandoned any pretence of being democratic: Sonia

Sonia Gandhi launched a scathing attack on the government over its handling of the Covid-19 pandemic and alleged that the spirit of federalism is all but forgotten and it has abandoned any pretence of being democratic.

Addressing a meeting of Opposition parties convened to discuss the plight of migrants due to the lockdown, she alleged that the government is uncertain about the criteria for lockdowns and has no exit strategy.

Gandhi said the migrants and 13 crore families in the bottom half of the population have been cruelly ignored by the government.

'The Prime Minister's grand Rs 20 lakh crore package has turned out to be a cruel joke on country,' she said.