'It is now cool to stay fit': Rujuta Diwekar 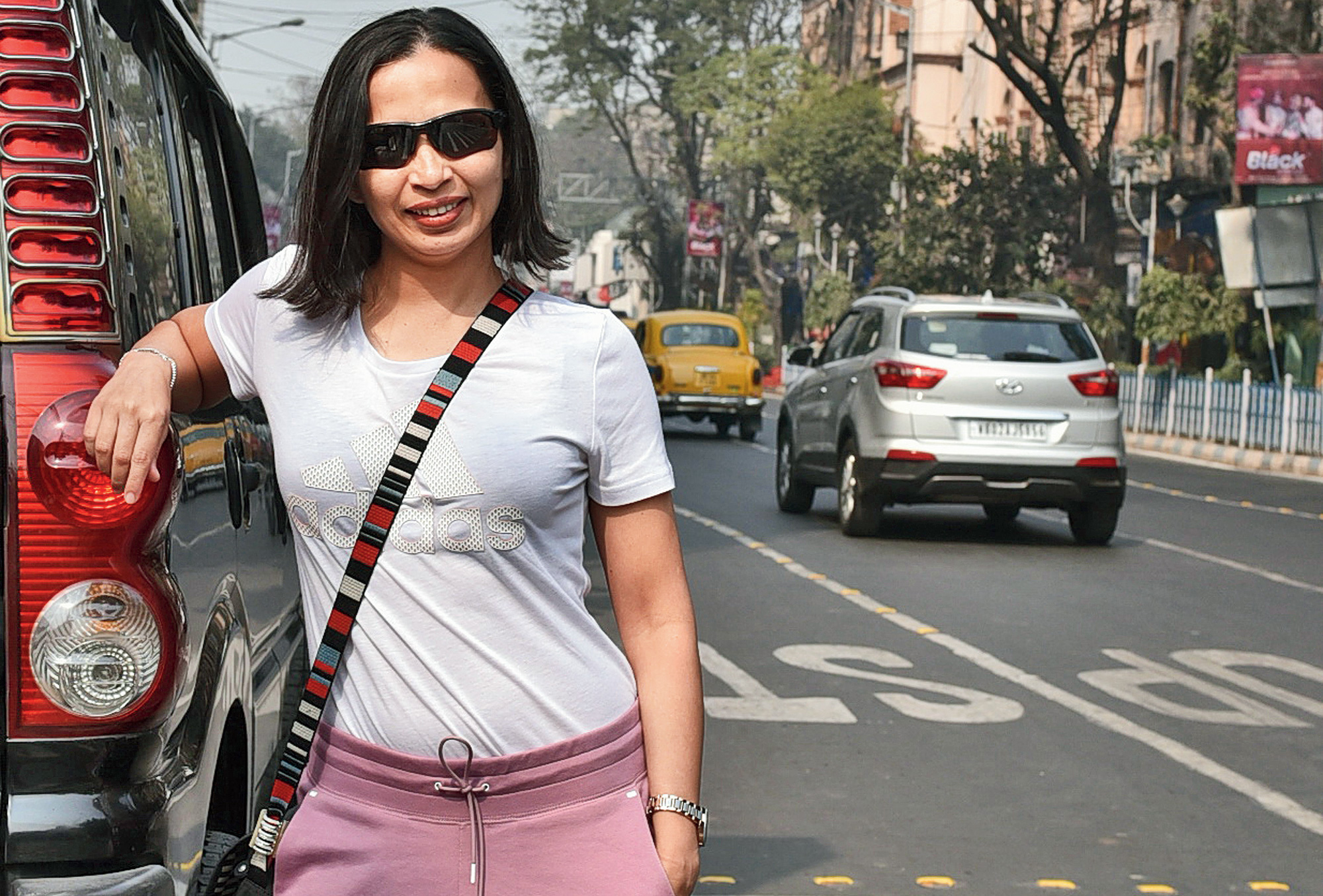 Rujuta Diwekar is a nutritionist with a difference. No fancy fads interest her and she champions local produce and eating a full meal without counting calories. The lady behind Kareena Kapoor Khan’s size-zero body is now the consultant nutritionist of Bolly stars such as Varun Dhawan and Alia Bhatt. Rujuta has penned multiple books on healthy eating and her latest offering is a health book for kids called Notes for Healthy Kids and for Parents Too, published by Westland. On her recent trip to Calcutta, she met t2 for a chat. We sat down at a Cafe Coffee Day on Park Street and munched on sandwiches and spoke about all things nutrition. Excerpts.

Where do you believe India is standing in terms of global health standards?

I think India is standing at a very interesting place. One, India has the time-tested wisdom of eating right, yoga and staying active and doing your chores yourself, which is our culture. On the other hand, we have the concept of eating our regional cooking, which is good for us and the planet. Like even if you come to a Cafe Coffee Day, now you see they have the Madras Sondal and they have something or the other from the East, West and the North as well.

We have always had our diversities but the problem now is that the affluent Indians are giving up on these diversities for a more homogenous diet. If you are rich, you must have cereals and low-fat milk and not eat luchi-aloo or idli-vada. I think we are at a juncture where we need to understand that we already have that wisdom and now it is all about practising the time-tested ideas versus going by the new headlines, weight-loss apps or sites every day. In terms of kids, we also have the second-highest number of obese kids as well as the highest number of malnourished children. We are at these extremities and I feel that the educated middle class needs to lead the way.

What are your views on the need for working out along with a healthy diet?

I say this both about a workout and a diet — you need to adopt something you can live with for the next 50 years. If you are only doing it for two weeks to get into shape for your cousin’s wedding, no one is going to recognise you after that because you are going to be ballooning out of your pants after that! Exercise isn’t a punishment, it is something that you owe to your body as a sense of responsibility. You must ensure that you are challenging it in terms of strength, flexibility and stamina. At the same time, a diet is not the same as deprivation. Whether it is a diet or a workout, relationship or a job, I keep saying that we have to look at it in the long term and not the outcome in the next two-three weeks. We need to keep this perspective in mind before we get on to anything.

Do you think with the youth, the consciousness about fitness is changing suddenly?

Yes and there’s a whole lot of reasons for that. It is now cool to stay fit and now you have Instagram and what not, which creates a lot of pressure to stay fit. However, there is no substance to it, it is more about what you look like on the outside as opposed to what you feel on the inside. Fitness is not about fitting into a certain size or looking good from a profile, it is about feeling on top of your world even at the end of your day, being high on self-esteem. When I go for talks to colleges, there are people rushing up to me asking for a selfie. Later they would say “oh my angle doesn’t look so well”. I just feel that you shouldn’t be putting your health at risk, just for 15 extra likes.

Any hacks you would suggest for people who are now leading a sedentary life?

In the IT, media or private banking industries, some of the brightest minds go to work there and within a year they manage to make these people at least five kilos heavier and at least 10 years older. I really feel that companies that hire young capital should also learn to be a little responsible towards them. It is not about giving them a salary and their weekly offs but really ensuring that you are building an environment of fitness.

Every 30 minutes, you should be able to stand for three minutes. Your workspace should have a big open window from where you can look out, and basics of gyms like yoga ropes, bars where you can stretch yourself. People not even in their 30s are facing back and shoulder problems and all of this is solely because of what their jobs do to them. One must demand the time for fitness within the job hours because if you are expected to work 10-12 hours every day for a week, there should be other privileges that you can avail. I would constantly root for one-and-a-half hours every alternate day, within your work time, to go take a fitness class or exercise.

And every person should know that every five years you have the ability to vote, so vote for politicians who will give you more livable cities where one can walk or cycle to their workplace, not worrying that if I walk, a bike or car might come and run me over. This is a more multi-disciplinary approach to fitness and not just calories in, calories out.

You have always championed the cause of ‘eat everything’. Don’t you meet with trepidation from people?

All the time and that is why I think it is thanks to my work with the Hindi film industry that I have received the support from media and a voice like mine is getting mainstream. Otherwise it sounds like a daadi or a naani saying something like this! (laughs). I am very aware of the fact that I couldn’t have done this kind of work without the support from these two places.

I firmly believe that it is not the food that is making us fat. It is the entire lifestyle in totality. People were eating luchis and nolen gur in the 70s, 80s and 90s. When you talk to your mother or grandmother, they were at least five-10 kilos lighter than you at this age. Being thin was the norm at one point while being fat has become the norm now. Calcutta, the city of trams and art and culture, is slowly changing and this is also changing what the city is doing to its people.

Kids are eating out of packets. If junk food is going to be your food of choice for your kids, there is nothing that can be done. When we stepped out of school, a guava or some other fruit was our easy choice. Now, for kids, chips, pastry and chocolates have become the natural choice.

One of my main focus areas is to align people back to the way they have always been eating — accordingly to our culture, climate and crop cycle. And it’s time we moved back to that instead of eating according to carbohydrate, protein and fat. This natural selection will help you stay fit for the next 50-60 years.

You work with celebrities. Any anecdotes?

You know people ask me how difficult it must be working with celebrities but I have been doing this for the past 20 years, so that’s my comfort zone now. I really feel that if you work with anyone with commitment and drive towards one aspect of their lives, that commitment and drive percolates into other aspects too. They put in a lot of effort and then people like me can take credit for all their efforts! (Laughs)

Who is your favourite?

That’s asking a mother who her favourite child is. I don’t have a favourite but if I had to say, I would perhaps say Kareena Kapoor Khan because she is almost like my second name. We have been together for ages and sometimes at airports people often look at me and say: “Kareena Kapoor?” and I just say yes! She has sustained herself for the longest time and also because of her I got popular.

What are your views on these new fads that keep cropping up like kale, quinoa, avocado that end up being too heavy on the pocket?

Well it’s great for the bottomline but it’s useless for the baseline.

And what about cutting out carbs totally?

Segregating food based on food groups like carbohydrate, protein and fat is equal to segregating humans on the basis of caste and religion. Then you are actually being biased and prejudiced. We have needs for all food groups and it has to be judged on merit. This conscious dividing is now called ‘nutritionism’, something that no one should indulge in because it only works for profits, it doesn’t work for people.

On the global stage of nutrition, who do you look at for inspiration?

Back home in the kitchen, that’s where my inspiration comes from! The farmers who ensure we get fresh produce and the people who cook in the kitchen — we have to look at them. The latest data in nutritional science is this — eat more local. Life is more about what we do on a daily basis and not what we see on our social feeds.