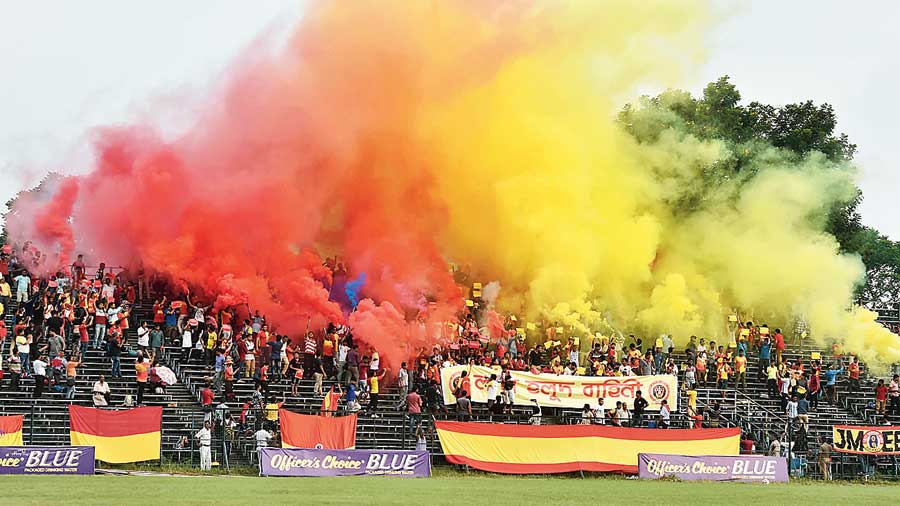 “I spend more time in being rich. And less time in looking rich.”

Hari Mohan Bangur, the new owner of East Bengal club, is a very successful businessman but prefers to stay outside the glare of the media and isn’t easily swayed by the allure of glamour of sport and its attendant charms. Bangur is as dour as East Bengal’s erstwhile owner, Vijay Mallya, was flamboyant. The two businessmen are as different as chalk and cheese.

The Calcutta-based tycoon’s off-the-cuff comment was made at an event where someone asked him why he chose to maintain such a low profile even though he had achieved so much.

Hari Mohan Bangur may have good reason to brag: the market capitalisation of his flagship company, Shree Cement, is around Rs 48,000 crore — and makes him arguably the richest industrialist in Calcutta.

The new majority owner of East Bengal club is inarguably the flag-bearer of the illustrious Bangur business family in India.

A graduate in chemical engineering from IIT Bombay, H.M. Bangur is rarely seen in the city’s cocktail circuit. Instead, he prefers to spend time in charting the future of Shree Cement, widely acknowledged as a world class cement manufacturer.

The company — which was apportioned to his father, Benu Gopal Bangur, after the split in the Bangur family in 1992 — has undergone a stellar transformation under his tutelage and investors have reaped the benefits. Set up in 1985, the company has come a long way, especially after H.M. Bangur took charge of its affairs.

Shree Cement — most of whose plants are located in Rajasthan, where the Bangurs originally hailed from — is one of the largest cement producers in north India with an annual capacity of 40 million tonnes.

Mugnee Ram, H.M. Bangur’s great-grandfather, made Calcutta his home like many of his fellow Marwari businessmen.

Hari Mohan Bangur has earned his spurs as a clear-thinking technocrat businessman. “Shree Cement has set international benchmarks in cement-making and a lot of the credit for that should go to HM,” says an insider.

Many reckon that it must have been hard to convince him and his son Prashant, who is a graduate from the Hyderabad-based Indian School of Business, to stump up the money for East Bengal.

Bangur is more comfortable talking about returns on investment (RoI) — a metric that will sound like gobbledygook in the business of sports and is voiced in hushed whispers in its boardrooms.

Investment in a legacy soccer club like East Bengal will come with its own set of challenges. The Bangurs not only will have to make an initial investment but keep on pouring in money — at least Rs 40-50 crore a year — for many years before seeing profit.

When East Bengal was scouting around for an investor, it had approached several other prominent business houses in Calcutta.

A leading banker and a top CEO of a conglomerate were approached but the deal did not go through. The search for an investor wasn’t widened outside Bengal; the idea was to look for a “home-grown” businessman.

Talks with Bangur started about two-and-a-half months ago when Bangalore-based Quess Corp, the existing backer of East Bengal, decided to sever its connections, which wrecked the club’s hopes to get into the Indian Super League (ISL).

The scramble to find an investor eventually led the storied club to the Bangurs. But there were a lot of problems that had to be surmounted before they could be brought on board. For starters, the Bangurs have been based in Dubai for the past few months — they own a cement plant at Ras Al Khaïmah in the UAE. The negotiations and the deal had to be sealed over the phone.

Prashant Bangur, joint managing director of Shree Cement, insisted that he hardly sees the joint venture as a business. “You call something a business when there is a return,” Prashant Bangur said, adding that it was his family’s wish to give back to the society and especially to Bengal, where they belong.

According to him, the family’s focus on business would not shift. “We are not mavericks looking for challenges. There’s enough of that already in our business. Like in cement, we hope to get a good professional to run the joint venture. Life will not change for us. We will remain as low key as we have been,” Bangur added.