Zanjeer and unshackling of the angry young man 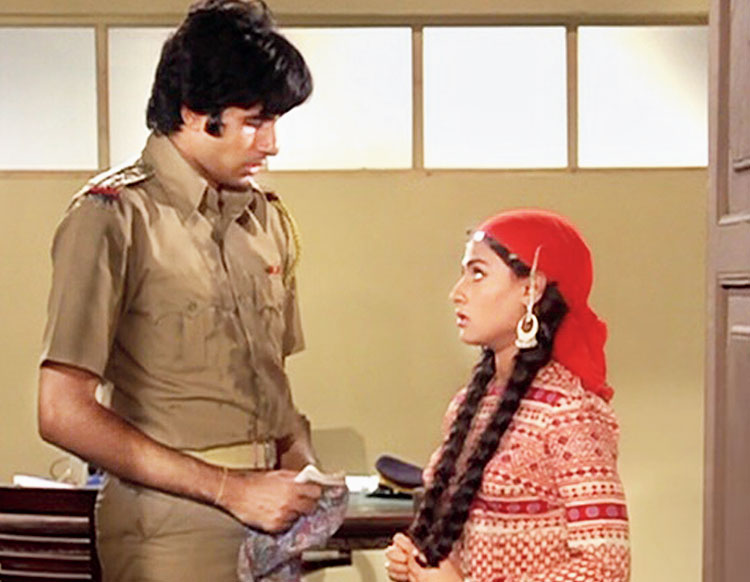 A boy’s parents get murdered. All he can see is a white horse dangling from the bracelet on the killer’s hand. Bang, bang, his world explodes. Outside, the world is celebrating Diwali.

This boy grows up to be inspector Vijay (lanky Amitabh Bachchan with eyes so intense that they hurt), a cop with serious anger management issues who sees the white horse in his nightmares. His girlfriend? Mala (Jaya Bhaduri, the bigger star then), a gypsy girl who sharpens knives for a living, and before her conscience is rattled, is okay with hush money. His best friend? Sher Khan, a Pathan who’s a reformed crook (the versatile Pran). His phone-a-friend? Police informer D’Silva (Om Prakash as sad and shadowy). His arch enemy? Dharamdayal Teja, a respectable industrialist with a shady business empire (suave Ajit, never better) and a moll in beehive hairdos named Mona (the fantastic Bindu). His frenemy? A drunk (laugh-riot Kesto Mukherjee with a twist).

Nothing in Zanjeer, Prakash Mehra’s best film that released 46 years ago in May is conventional, except that age-old niggle — a spunky girl, Mala in this case, tamed by love.

But, you have a hero who goes all dark and twisty, unlike the pretty boys and good-natured men with mannerisms. Zanjeer laid the foundation of Big B’s Angry Young Man persona that made him a “one-man industry”. It made heroes out of writers Salim (Khan)-Javed (Akthar). It had a tender moment, Deewane hain, deewano ko na ghar chahiye (Kalyanji-Anandji in fine fettle), where eyes do the talking. Most important, Zanjeer said it was okay to be angry. Post-Independence idealism was dated, people were angry that the country’s creamy layer could milk a corrupt system to fatten themselves. Salim-Javed tapped into this anger to come up with a hero who could take on this system, a good cop who wasn’t goody-two-shoes, who used his fists to talk and skated on thin ice. Superstar Rajesh Khanna didn’t realise the ice cracked where he stood.