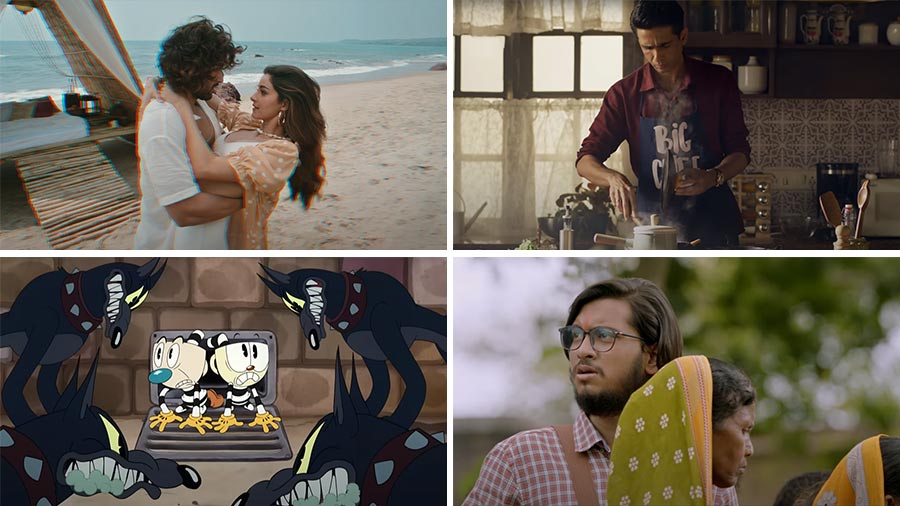 The video focuses on the lead pair, Deverakonda and Ananya, as they are seen romancing on beautiful beaches and rocks.

ZEE5 released the trailer of their upcoming suspense thriller series, Duranga, starring Gulshan Devaiah and Drashti Dhami. The series is directed by Pradeep Sarkar and Aijaz Khan, while Goldie Behl is credited as the showrunner.

The trailer gives a peek into the two sides of Gulshan’s character – a perfect husband and father on the one hand and a cold-blooded serial killer on the other.

According to the official release, “Duranga chronicles the love story of Sammit (Gulshan Devaiah) and Ira (Drashti Dhami), which unfolds in three different timelines. Hiding a twisted past, Sammit maintains a facade of a perfect man, father, husband or perfectly faking it all?”

Duranga is an official adaptation of the Korean show, Flower of Evil. It will premiere on ZEE5 on August 19.

Netflix dropped the season two trailer of their animated show The Cuphead Show on Saturday. The series is based on the classic Fleischer rubber hose-style animation and was adapted from the critically acclaimed video game, Cuphead.

“The Cuphead Show follows the unique misadventures of the impulsive Cuphead and his cautious but easily swayed brother Mugman. Through their many misadventures across their surreal home of the Inkwell Isles, they’ve always got one another’s backs. The new series will expand on the characters and world of Cuphead, in an animation style inspired by the classic Fleischer cartoons from the 1930s,” reads the official synopsis of the show.

The Cuphead Show S2 will be streaming on Netflix from August 19.

Haar Na Manar Gaan depicts the fight of the young generation against superstition. They are not even afraid to give up their lives and are determined to eradicate the darkness of superstition from their society.

Presented by Nandita Roy and Shiboprosad Mukherjee and produced by Windows, Lokkhi Chhele is all set to release on August 25.