Vicky Kaushal dives into the ocean along with Bear Grylls 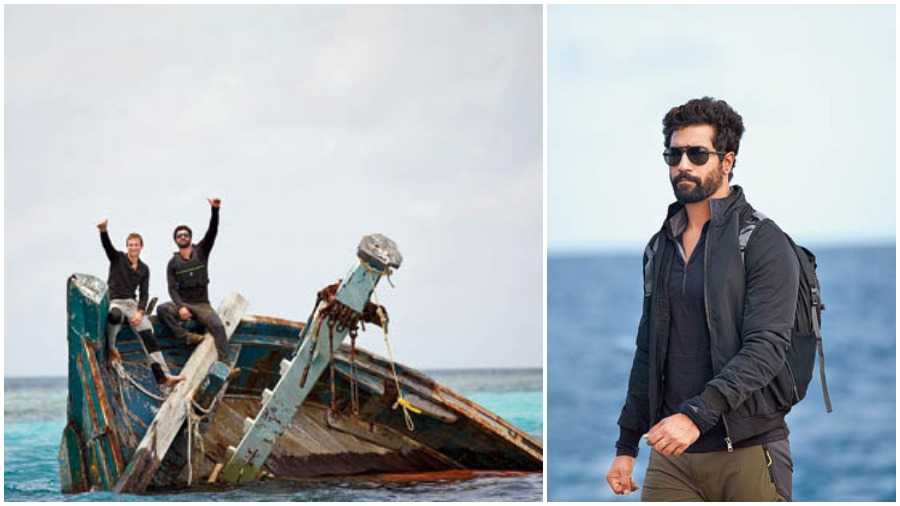 Vicky Kaushal, one of Bollywood’s most eligible bachelors, has finally taken the plunge. Not just in wedlock with Katrina Kaif, but in the Indian Ocean, too, with the redoubtable Bear Grylls, for adventures of another kind.

Bear, who has already taken other Indian actors such as Akshay Kumar, Rajinikanth and Ajay Devgn for a taste of his kind of raw, bare knuckle, adrenaline-pumping survival challenges in deep and dense terrains, challenges Vicky’s josh too. The setting of this episode of Into The Wild with Bear Grylls, now streaming on Discovery+, is a tiny island somewhere in the middle of the Indian Ocean dominated by mangrove swamps where Vicky would face his deepest fears and get offered seafood caught bare-handed by Grylls to be eaten raw off the shell! Here’s what the Uri actor told The Telegraph about his experience...

Did you catch a few episodes of Into the Wild before setting off?

I had watched Bear Grylls’ episode with Akshay Kumar. So I was really happy that I could be a part of the show and go through the same process with Bear.

You spoke of a fear of deep sea water. Did you seek some time off the camera to adjust to the dare of diving in at the shipwreck spot? How tough was that experience?

Before reaching the shipwreck, I would ideally have loved to have got some rehearsal of being in the water so I could get familiar in the deep sea atmosphere amid the currents as I have never been in the middle of an ocean before. But I did not get that chance because Bear was of the opinion that the show must go on and we should just carry on. That became the greatest trick to overcome my fear as I did not get any time to indulge my fear in the first place. That actually changed the game for me and I really thank Bear for taking that approach towards tackling someone’s fears and apprehensions of something. You just got to trust the process and go with it. Of course, swimming in those currents was physically exhausting but it was a brand new experience for me.

“Bones heal and chicks love the scars”, as Bear told you. Thankfully no bones were broken on the episode, but do you have anything to show for the adventure? Did you bring back your muddy T-shirt and shoes as trophies?

I would have loved to have taken something back but everything was so muddy and dirty that it would have been very difficult to carry along back to India. I will make do with the stunning pictures we have on the shipwreck in the middle of the Indian Ocean as souvenirs.

Which segment was the most exhausting?

The most exhausting patch in the whole episode for me was when the sea plane in the end landed and from the shipwreck site we had to approach it. By then, my energy level had dropped and to do even a single stroke was really exhausting. Plus we were swimming against the current, so no matter how much I was swimming I was feeling I was just not approaching the sea plane. At that point, Bear called for the ropes and threw them at me. That really helped me to reach the plane finally.