These music albums are all about warmth and candour 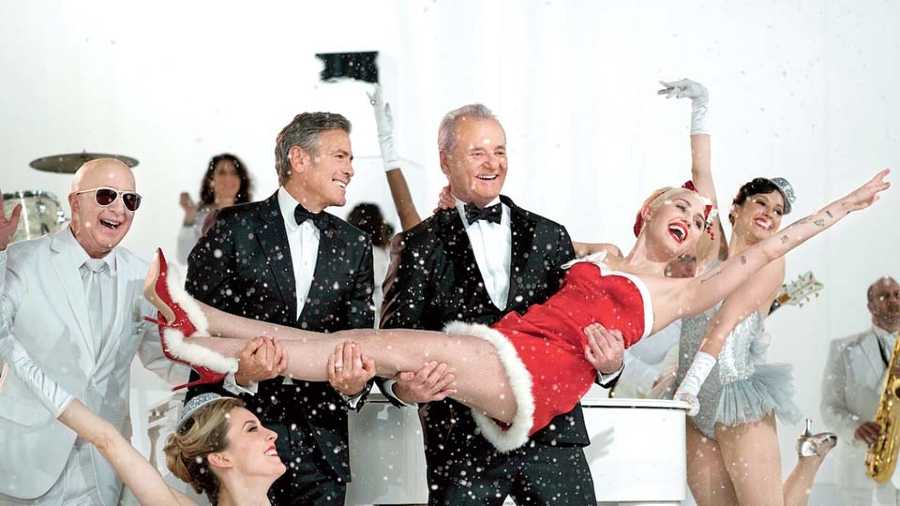 This one emanates the warmth and earnestness of winter. Miley notches up the glam quotient and brings on star power with George Clooney and Bill Murray by her side. It’s a delight to see George on the piano and Miley singing with Bill Murray. The premise of this Netflix holiday special, A Very Murray Christmas, is that “Murray tries to keep the Christmas cheer going after his plans to host an international holiday special are halted by a blizzard. He makes the best of the situation by singing and celebrating with friends”. By the end as the snowflakes come down, Bill does a cool jig and finally picks up Miley in his arms as George rushes in to lend support!

With lead Animator Damon Wellner on board, SIA’s music video for Snowman is an overload of cuteness as it depicts the story of a snowman and his wife, created by a girl. Once the summer sun shines down, they fear the end but the little girl comes up with a brilliant plan. She puts them in an ice box and travels to the North Pole where they can live happily ever after. With a piano-driven tune, the video brilliantly uses colour to highlight features of the characters and nature and balance it against the white background. In the North Pole, as a gesture of gratitude, the duo builds a snowhouse for the little girl!

Many moons ago Richard Ashcroft had defiantly walked down London streets, bumping into people and not pausing for a second to look back in the video for Bitter Sweet Symphony. He immediately became a hero for the underdog. Norah Jones does the opposite in this video where she spreads warmth and cheer as she cycles down streets, providing an unforgettable image as she leads a group of Santa Clauses to a concert.

Era dances up a storm on a deserted road cutting through mountains that are wrapped in snow. Her jacket with a pink hood brilliantly brings out the pop of colour in a barren landscape.

The close-ups of men dressed in black coats plucking strings beautifully complement and offset the white background covered in snow. The camera finally pulls back to reveal the faces of the band members who sing the hypnotic song in the middle of a forest.

A flannel-clad puppet frog is the protagonist in this adorable video for the song Little Frogs by Sarah Harmer that celebrates the wonders of winter. It is a day in the life of a puppet frog who starts by having breakfast, then does some chores, moves to gardening, picks up flowers and plays the piano. He then steps out to paint the scenery and finally counts the stars at night as Sarah sings, “All that I love/ Rain at night/ Shadows that fall in the backyard moonlight/ Whatever it was we heard in the woods/ That we may never see/ Who doesn’t love a mystery.”

The song is an ode to summer but the video directed by Paul Thomas Anderson starts off in winter with Danielle Haim wearing a fur-lined, hooded coat. As Danielle, Este and Alana walk down the sidewalks of Los Angeles, the Haim sisters strip away layers of clothes which symbolises the need to unburden emotions carried within. “Under the freeway overpasses / The tears behind your dark sunglasses / The fears inside your heart’s deepest gashes / Walk beside me,” she sings.

In a statement Danielle Haim had said that she began the song when she found out her partner had cancer and wanted to lift his spirits: “I was on tour and felt like I was trying to send positive energy his way almost telepathically. Whenever I would come home in between shows I wanted to be his sunshine — his summer when he was feeling dark. His hope when he was feeling hopeless.” By the end of the video, it is summer time, the sun is beaming and so are they, in denim shorts, and tube tops.

Weyes Blood brings on the scares and an element of fun in Everyday that starts off as a throwback to pop music videos of the 1970s. A fun getaway for a group of friends in bright sweaters and jackets in the woods make for warm moments. In the evening, the mood is serene, the song is soft with people cosying up around a crackling fire. But things take a turn when the boys enter the cabin and Natalie sings, ‘I need a love everyday!” As if on cue, a mysterious figure wielding an axe appears and true to the slasher movie genre, bodies start piling up one after the other. The handheld camera movement towards the end perfectly captures the action and the mood of the song.