The Last Dance, ESPN’s new offering often bristles like a Samba and ends as a celebratory waltz that toasts one of the greatest teams sport has seen 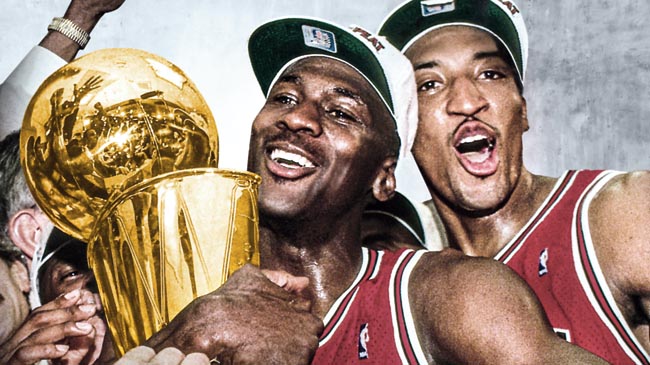 For those who want a change after the dark grittiness of Paatal Lok, here’s a strong recommendation for 10 evenings with the men who walked on air, aka, Michael Jordan and the Chicago Bulls. The Last Dance, ESPN’s new offering to sports enthusiasts the world over, often bristles like a Samba, sometimes smoulders like a tango, and ends as a celebratory waltz that toasts one of the greatest team sport has seen.

‘The Last Dance’ was the term coined by Bulls’ celebrated coach Phil Jackson for his final season with an ageing Chicago Bulls team as they chased an unbelievable sixth NBA title in 1997-’98. The season’s acrimonious context, the tensions between management and players, the talent scout Jerry Krause’s growing unpopularity, all act as springboards in this incredibly well-edited sports documentary. The episodes then segue between the past and the present but at the centre of the dance and indeed the NBA story through the 1990s is Michael Jordan. As the man who had an extra nanosecond in the air, Jordan was the athlete whom cable TV and the resulting global market was waiting for.

The series starts by establishing the faultlines that existed in the ‘Last Dance’ season of 1997-’98 but also goes back in time to trace the beginning of the Jordan story from his boyhood in Wilmington, North Carolina. The potential for greatness, his college draft and first baby steps into professional basketball are juxtaposed with a trip the Bulls make to Paris, where the French simply cannot have enough of Jordan, his slam dunks and his sharp berets!

This is a team game and while Jordan is at the fulcrum, there were the great Scottie Pippen, the maverick Dennis Rodman and the completely Zen Phil Jackson as well. Each of them gets the better part of an episode each, and director Jason Hehir dips in and out of their past to proceed with the story of the final season. The enigmatic Pippen was always seen as Robin to Jordan’s Batman but was a huge star and asset for the Bulls. His disadvantaged background, prodigious talent, unfair contract, growing frustration and occasional brain fades make him a superb foil for the wonderfully self-assured, often arrogant Jordan. As for Rodman, he’s that guy man who runs off to Vegas, disappears during the NBA finals to appear with Hulk Hogan in the WCW and has adult movie star Carmen Electra telling his story.

The Phil Jackson episode is like the man himself, understated, perceptive in how it links his childhood interaction with native American with his persona of being unflappable, deeply perceptive and incredibly smart at man management. There are little vignettes of Jackson’s wild past as a player, which possibly is what helped him deal with wild child Rodman in the second ‘three-peat’. As the story progresses, so does the Jordan legend. He recalls someone telling him ‘there is no ‘I’ in a team’. Jordan’s reply was: ‘there is ‘I’ in a win!’ That was the confidence of Jordan and he is indeed the ‘I’ and the eye of The Last Dance. What makes Jordan a legend is not just that he managed to galvanise the Bulls into becoming champions thrice in a row twice — 1991-1993 and 1996-1998. It is the near misses, the crippling losses, the euphoria of winning the title thrice, the intense media scrutiny, the loss of the man closest to him and then retirement at the peak of his game to pursue another sport (Minor League Baseball).

The story does not end there, as Jordan returns and within a season is able to once again achieve the three-peat with a team that is seen as ageing and on its last legs.

The director and his editing team nail it by simply telling it straight with some amazing flourishes that can only be achieved with complete locker room access from back then and superb reminiscences from right now. In this they are aided by the supremely charismatic Jordan, the incredibly candid contemporaries Isiah Thomas and Reggie Miller, the warm admiration of Larry Bird and Magic Johnson and the fuzzy memories of the other Bulls of the time from Pippen to Horace James and Toni Kukoc to Steve Kerr. That’s not all, Barack Obama and Bill Clinton, too, come calling about Chicago and Pippen’s early days in Arkansas, respectively. The series has already caused its share of controversy since it does dig up old grievances. Isiah Thomas is still upset about the possibility that he was kept out of the 1992 Olympics Dream Team by Jordan. Horace has complained that the series has portrayed him unfairly and even the inscrutable Pippen is said to be ‘beyond livid’. That is testimony to the honesty, frankness and unflinching focus the director has on the story even at the moments when it veers from fairytale territory.

Uncomfortable questions are also asked of Jordan, adding texture to the storytelling. His gambling habits, his fierce rivalries which fed his hunger to win, and his flashes of arrogance are all shown without any dilution. The one accusation that still hangs heavy is his silence on political/social issues. He justifies his refusal to back a Democrat against Harvey Gantt, a controversial Republican in North Carolina, by saying that he was not like Muhammad Ali, who fought these battles. Matters got worse when Jordan’s ill-advised remark: ‘Republicans also wear Nike’ went public. Jordan maintains to this day that he was there to play ball and his political affiliations were a private matter. At present LeBron James and Steph Curry, the current reigning kings of NBA, have spoken out against the police after the death of George Floyd but that was not Jordan’s way — of all the grey areas around his story, this was the most worrying.

If there are chinks, there are some ‘aww’ moments as well! Jordan sobbing on the floor of the locker room after his fourth title is one such moment.

All this is the outside court, but on the court, in advertisements (the Nike association is a wonderful part of the show) and even in front of the camera at present, Jordan defines swag. From the gravity-defying dunks to the cigar ritual post-match, he quite simply is an arresting presence on the screen — one that still fires up memories, polarises opinion and creates a stir. Barack Obama (described in the chyron as ‘former Chicago resident’!) has the last word: ‘There are certain sports figures who become a larger cultural force. Jordan was able to create a different way in which people saw African-American athletes, and saw athletics as part of the entertainment business. (Jordan) was an extraordinary ambassador for American culture sweeping across the globe.’

Phil Jackson’s magnificent men disbanded after The Last Dance of 1998 as the Bulls decided to rebuild from scratch. They have never won another NBA title since then.

(The author is the director of Tata Steel Kolkata Literary Meet, held in association with The Telegraph)