Advertisement
Home / Entertainment / ‘The story of most Indian women’

‘The story of most Indian women’ 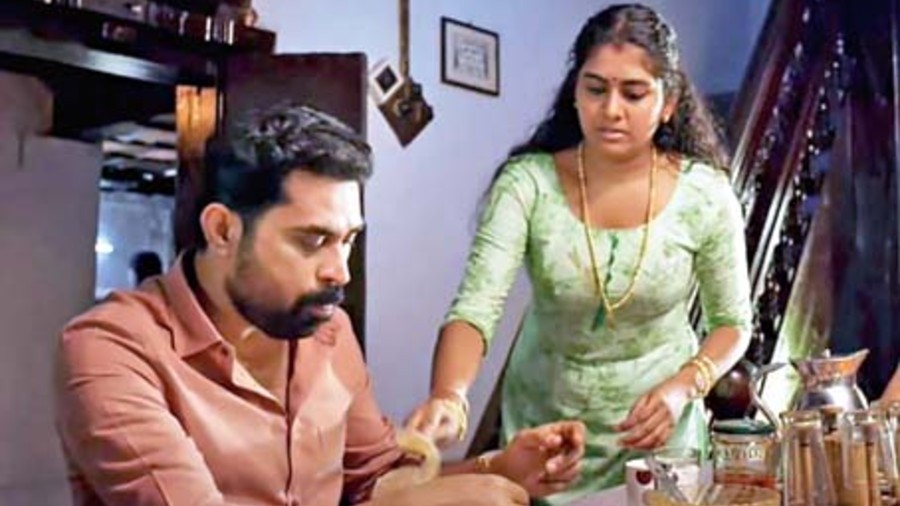 Suraj Venjarammoodu and Nimisha Sajayan in The Great Indian Kitchen
Sourced by the correspondent
Priyanka Roy    |   Published 10.02.21, 12:21 AM

Tobe honest, I am a little late to The Great Indian Kitchen party. Ever since it dropped on the virtually unknown streaming platform Neestream about three weeks ago, this Malayalam film — relatively small in scale, but big and bold on insight and idea — has been creating waves.

The Great Indian Kitchen — contrary to what its name may suggest — doesn’t romanticise the kitchen, or what goes on inside it. On the contrary, it wryly, and almost sarcastically, presents it as a four-walled fortress where women, irrespective of stature and social upbringing, have been boxed in for ages.

At the very outset of this 100-minute film, you know that The Great Indian Kitchen isn’t going to be an average run-of-the-mill watch. The opening slide reads, ‘Thanks, Science’, instead of the more common ‘Thanks, God’ that those familiar with Malayalam movies have come to expect.

With The Great Indian Kitchen, director Jeo Baby brings years of patriarchal politics and systemic gender subjugation under an uncomfortable scanner. The film doesn’t tell us anything that we haven’t seen, heard or experienced before. What it does is make us, men and women, cringe in our skin as we acknowledge how seamlessly and subconsciously we have allowed gender roles dictated by family and society to become our way of life.

Casting a keen eye on an orthodox middle-class family in Kerala (though the story that unfolds is universal), the film has the lead pair (played by Suraj Venjarammoodu and Nimisha Sajayan) with no names. Reason? They are Everyman and Everywoman. They could be you and your partner, they could be your neighbour and her partner. The first few shots tantalisingly cut between stacks of banana chips being fried to a smiling Nimisha moving with abandon in her dance class. Things move quickly, with Nimisha and Suraj meeting awkwardly for the first time in an arranged marriage set-up, getting married, she moving into his home... and straight into the kitchen. For that’s where she’s meant to be, along with her mother-in-law, without anyone batting an eyelid.

The Great Indian Kitchen is a remarkable piece of film-making because it keeps the viewer engaged and invested in moods and moments that are repetitive, which may even come off as random, but all of which are designed to drive home a point. The women cooking, grinding, cleaning, wiping, sweeping, are the only sounds that one gets to hear in the film. Initially, the images of the idlis popping out of the mould, the dosa being rolled on the non-stick pan, the sambhar boiling on the stove, the idiyappams being plated, are sumptuous, but very quickly, the film drives in the thankless drudgery that Nimisha has to go through. What remains with you is the leaking sink, the overflowing waste basket, the dining table smeared with leftovers that the men walk away from coolly after a meal, expecting the women to clean up after them.

Even outside the kitchen, the skewed gender politics plays out. In the morning, the men — Suraj and his father — have to be even handed over their toothbrush and sandals by their women. While Nimisha’s eyes well up with blinding smoke from churning the rice on the wooden hearth, Suraj does his morning yoga on the courtyard greens. At night, Nimisha’s request for foreplay before sex is laughingly turned down by her husband.

Even as it focuses on the unspoken exhaustion that the women face chained to their kitchens, The Great Indian Kitchen makes quite a few social and political statements — from the age-old custom, still followed in many parts of the country, of treating menstruating women as pariahs, and places the film in the context of the Supreme Court verdict on women’s entry into Sabarimala. The film never pummels in its message, but what it strives to say stays on with you for days and weeks after you have watched it.

A scathing indictment of the patriarchal institution that marriage is in many Indian households, cutting across district and demographic, The Great Indian Kitchen is the kind of film that should be made mandatory viewing. The final moments may have a smiling and independent Nimisha embrace her new identity as a dance teacher, but then there is also the soiled tea cup left behind by Suraj in the kitchen, for her successor to pick up. Some women may have the strength to break free, but the shackles will always be passed on.

You can stream The Great Indian Kitchen on the Neestream app