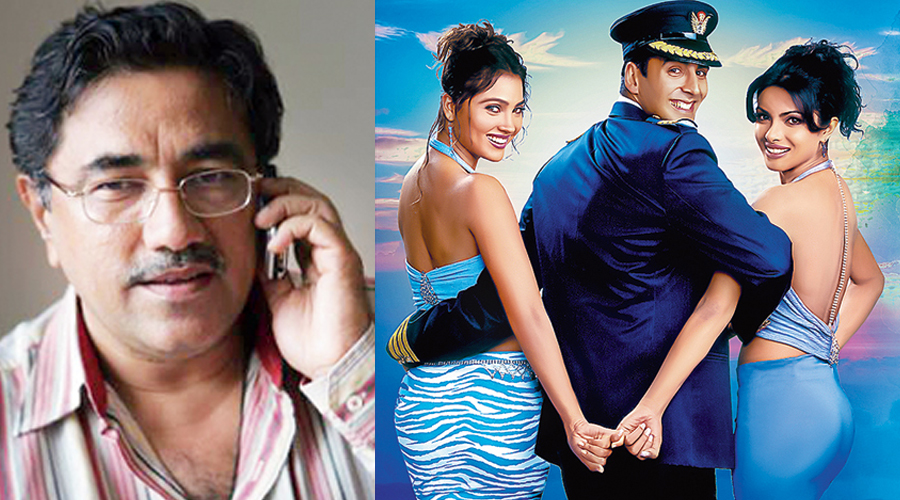 Suneel Darshan (left); Akshay Kumar with debutantes Priyanka Chopra and Lara Dutta in a poster for Andaaz
Sourced by the correspondent
Sudeshna Banerjee   |   Published 22.05.21, 12:01 AM

He had introduced international beauty pageant winners Priyanka Chopra and Lara Dutta to the Indian film audience. Eighteen years to the day after Andaaz released in cinema halls, the film will be telecast on Zee Bollywood (on Sunday at 2pm). Producer- director Suneel Darshan speaks about his two finds and his long association with Akshay Kumar in a chat with The Telegraph.

There was a cinema strike going on when Andaaz was supposed to release.

Yes. In April 2003, a producers’ strike was going on, the cinemas shut down and there was a crisis in the industry. Cinema owners were talking of converting their properties into commercial centres. I personally called up exhibitors and cinema owners in places like Jabalpur, Indore, Gwalior etc requesting them not to shut down and that a potential hit film was coming their way. On May 23, the film released to housefull collections.

Was it the first film to release after the strike?

I think The Hero had released just before that (technically it was Priyanka’s debut film).

It seems you were pretty confident about the film’s success.

When I was about to release the film, I decided to do the music release in a big way. Akshay Kumar was recently established and both the girls were newcomers. Amitabh Bachchan was invited to launch the music of Andaaz. Akshay, Priyanka and Lara performed before the media to the songs of the film. The ovation they received was amazing. Everyone saw their capabilities. I had just unleashed the potential. We knew there and then that the film had the makings of a superhit. The glamour was there, the freshness was there, the music was there along with effective marketing of a traditional story. I took the cast to London for an international launch. The girls were chased by paparazzi there. It was a new experience for them! 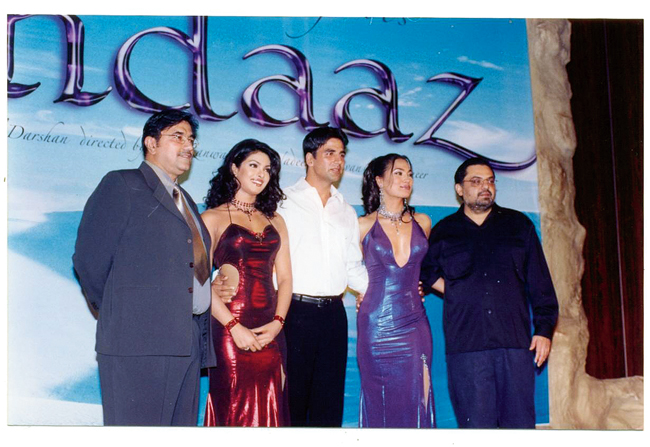 A lot of Indian cinema was being shot in Switzerand. I thought Europe was becoming repetitive — in film after film you could even identify the lake in all the movies — so I thought why not break the norm and go off in another direction? That’s how Cape Town came in. I had shot Talaash there. After that, there was Andaaz.

Casting two new girls must have been a big challenge.

I was in talks with two established heroines when it struck me that there would be nothing new in the cast. So I thought why not break the rule and cast new faces. I had seen Lara in a photoshoot with Akshay on the cover of a magazine for a film that never took off. She had left for her father’s place in Bangalore. I called her from there. Priyanka came to my office with her secretary. She had signed three or four films before that but none had materialised. She was not a conventional beauty, like Kareena or Karisma with whom I had worked before. But her voice was mellifluous and I could see the hunger in her eyes. I spoke to her for 10 minutes, during which I was observing her. I thought this girl could be another Rekha. Nobody believed me then! (Smiles)

Andaaz did have phenomenal music by Nadeem-Shravan. Shravan passed away recently of Covid-19.

Yes, sadly. The music was composed by Nadeem in London. Thereafter the recording and the vocals were handled by Shravan in India. That’s how they worked for all my movies, be it Andaaz, Ek Rishtaa, Barsaat or Dosti... Rabba ishq na hove, Aj kehna zaroori hai — all songs in the film were superhit.

You started as a distributor. How did you get into direction?

I come from a film family. I started off as a distributor, went on to produce my first movie and then became a director. The intention behind heading the distribution was to understand what works beyond the limits of Bombay city. I used to sit in my office in Indore, which handled the central Indian circuit. Thereafter I took on the producer’s job but I always wanted to be a film-maker. So I was taking one step at a time. The first movie I made was a commercial potboiler called Inteqam with Sunny Deol and Anil Kapoor. The director was Rajkumar Kohli. With my second movie, I launched my younger brother Dharmesh Darshan as director. Lootere was very successful and was a quality movie. After Lootere, Dharmesh went on to do Raja Hindustani with an outside producer. I picked up the director’s mantle for the third film, Ajay, with Sunny Deol. 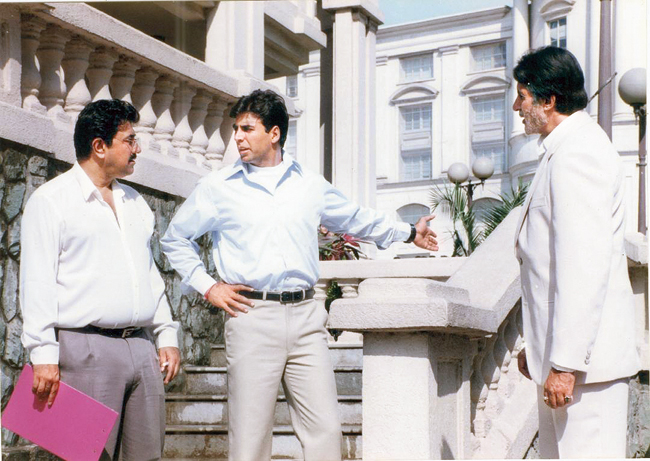 You had a long stint with Akshay Kumar.

I am lucky that I could do seven films with Akshay. When he first came to my office, a string of films of his had not done well. But I had heard he was a disciplined boy. The first film we did together, Jaanwar, was a hit. He said he wanted to sign 100 films with me! Then we did Ek Rishtaa.

Is it true that Amitabh Bachchan called you for the film?

Yes. I was driving from home to office one morning when a call came. It was a familiar voice but I wasn’t sure. It said: “Main Amitabh Bachchan bol raha hoon.” He had heard from a senior journalist that a film with such a script was soon going on the floor and wanted the role. It was such an honour!

How was Priyanka’s growth from a model and pageant winner to an actress?

She was all energy. She was a go-getter from the start. She was a good dancer but in Cape Town I could see that she was having problems with Bollywood-type moves. There was a gap of a month in the schedule as Akshay had to be back for the birth of his first born. For that one month, Priyanka trained daily with the choreographer Veeru Krishnan who had done Raja Hindustani. When we resumed shooting, she was ready.

Coming to another prominent actress of today, who worked with you early in her career, Kangana Ranaut featured in Shakalaka Boom Boom. Was she this opinionated even then?

It was her third movie. She was much younger and going through the initial struggle. But she was definitely a girl with a mind of her own. I had seen her in Gangster. But somehow she was not noticed in the film. I saw that movie and wanted to work with her. I called for her. When she came, I thought she had the potential to become some sort of a Meena Kumari.

How was the experience of working with her?

Well, I finalised her for the film and she went missing. In the meantime, Aditya Pancholi’s daughter came in. The entire shooting was to be in South Africa and the unit had to leave. But later I thought I had taken an abrupt decision about the replacement as I had pictured this movie with the girl. So I got back to Kangana. She was shooting for a film in Dubai. She said: “Give me seven days, I will join you.” So I waited and she was there. She is a tremendous artiste. The only slip between the cup and the lip is the tongue.