Meet Mika Singh, the ‘hitwala gaana’ man, who sings for free for friends and will marry a Punjabi girl 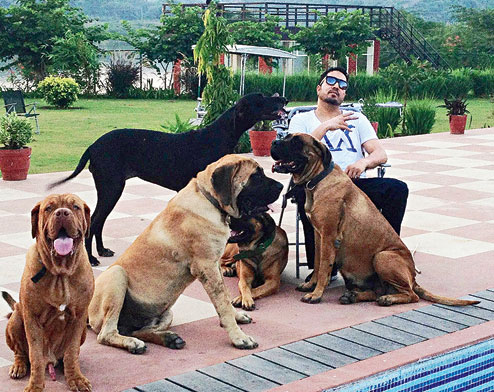 Mika Singh, 38, one of the mentors on Zee TV’s Sa Re Ga Ma Pa, in a freewheeling chat with t2.

You have a Bengal connection...

Yes. I was born in Durgapur and I do the maximum shows in Bengal. My father sang kirtans in a gurdwara there. We are six brothers, each of us born in separate states. Dalerji (Daler Mehndi, his elder brother), for instance, was born in Bihar. I have lots of Bengali hits — Paglu, O Madhu... Bengalis have a musical inclination. They will sit for three hours straight and listen to music.

How do you manage to capture emotions when you do not know a language?

The credit goes to music directors like Jeet Gannguli. Now he is in Bollywood too. They explain (the lyrics) to me. By the way, when I met Pritam (his fellow judge on the show), I had thought he was Pritam Singh. So I started speaking in Punjabi. Then he said he was Bengali! Most of my songs are by him.

You judged The Voice India last year. This year you are on Sa Re Ga Ma Pa. Aren’t reality shows throwing up too many singers?

I want more and more singers to come up. If the same five singers keep singing, how will people find out kya achha hai, kya bekaar hai? Earlier there was just one channel. Nowadays it is great that you have music channels which play all kinds of songs. Now you know Rahat Fateh Ali Khan is a good singer because of exposure. Earlier, you had only Bollywood songs on TV. Nusrat Fateh Ali Khan saab had been singing for long but we got to know about him only in the mid-90s.

Doesn’t today’s trend of a constant search for new textures in voices put pressure on singers?

Today, it is the director who decides whose voice he wants. Music director ke haath mein kuch nahin hota. He puts pressure on the composer ki humein Mika chahiye ya aur koi chahiye. Take Mauja hi mauja (Jab We Met). Kareena Kapoor and Shahid Kapoorji are dancing because of the hit song. I am called in situations when all the songs in a film are shot but then it is decided that a hitwala gaana daalna chahiye. Then people think of calling Mika. You will seldom find me singing sad or situational songs. Kashmir ki wadiyon mein hamare gaanein nahin hote. From 1998, I am surviving. I have a fan following. And directors know that.

You are among the highest paid singers now.

(Playback) Singing ka toh paisa main leta nahin. Main yaari dosti ke liye gaa deta hoon. But for shows, you can say I am the highest paid (laughs). This is because I try to make the show as grand as possible. I also need the money as I have an NGO, Divine Touch. When I distribute money freely, I need to earn as well.

Which songs have you sung for free?

All of Pritamda’s songs, Sajid bhai (of Sajid-Wajid) ke liye Chinta ta (Rowdy Rathore), Jumme ki raat (Kick) for Salman bhai.... I had started my career riding a bicycle. I used to do shows for Rs 150. I struggled from 1998 to 2001. I used to think I would be a composer, not a singer. I used to work with Daler paaji. Then my song Sawan mein lag gayi aag became a hit. Today I travel in a big car. That makes people in the industry wonder: ‘Iske paas itna paisa hai, issko aur kya doon?’ Main bhi apna amount maang nahin paata hoon.

No one can take Sidhuji’s place. He has his own style of speaking. I have brand value. Mere gaane chal rahe hain. It might not be so tomorrow. Vipul Shah used to produce Comedy Circus. I used to tell him: ‘Mujhe baitha de. Mujhe hasna hai’. He used to say: ‘We can’t afford you.’ Then his show Comedy Nights Bachao came. I went as a friend on one episode. They felt I was lucky for the show. Humko ab jaane nahin deta.

How would you rate your show’s host Krushna Abhishek compared to Kapil Sharma?

Kapil is my first fan. In 1997, I was doing shows with Daler paaji. Kapil met me twice backstage. Kapil brings Punjabi flavour to the show. Krushna is Govinda’s bhanja, is a dancer and comedian. Bharti (Singh, the co-host) toh kamaal ki hai. You can make her speak any language. I am also a fan of Sudesh Lehri (another host). In his audition, he had impersonated me.

What about rumours that you and actress Urvashi Rautela are tying the knot?

KRK (Kamaal R. Khan posted the information on Twitter which went viral) lives close to my house. I have told him ke woh agar ulta seedha likhega I will go straight to his house. Since I am unmarried I will leave all my property to him (voice deadpan).

Urvashi is a nice, hard-working girl. I have not thought anything like that. We had done a music video together in Lucknow. If I have to marry, I will look for a Punjabi girl. Long-term chalna hai toh apni community se shaadi karni chahiye.