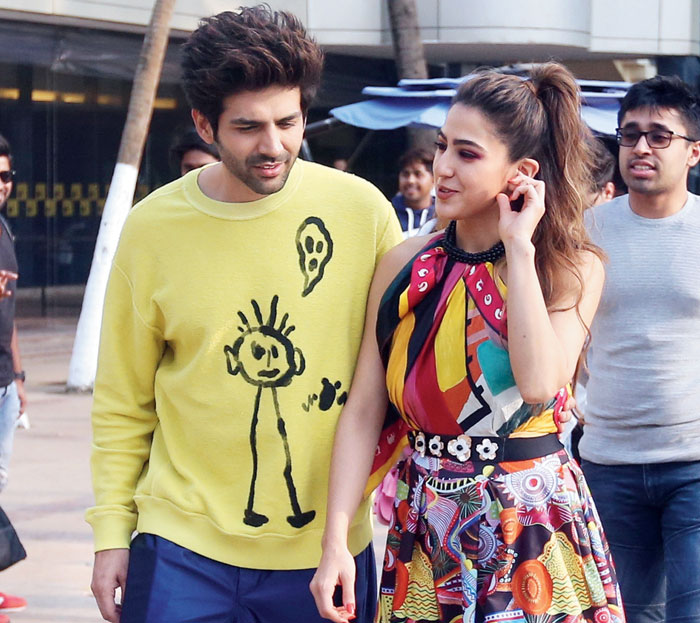 People might say you shouldn’t be in a relationship when you have such a long career ahead. I really don’t get those things. I feel it’s your personal life and you’re working so hard. If you find true love, then why not? It’s the best thing that could happen in your life, with anyone: Kartik
Fotocorp
Karishma Upadhyay   |     |   Published 13.02.20, 01:36 PM

In their first-ever screen outing together, Sara Ali Khan and Kartik Aaryan will be seen in director Imtiaz Ali’s Valentine Day release Love Aaj Kal. The Telegraph sat down with the actors in Mumbai over the weekend for a quick chat where they talk about the first time they met, dating as celebrities and what love looks like aaj kal.

The last couple of years have been incredible for both of you. Have there been moments that have felt completely surreal?

Sara Ali Khan: Yeah. I think almost every day. Thankfully, for the past year and two months, it’s been very hectic, so one hasn’t had that much time to sit and ponder about this that much. But there are those fleeting moments in the middle of exhaustion like right now. Just sitting here with Kartik and talking about a film that I’ve spent a year doing — this is a surreal moment. This is something I’ve wanted for so long, that I can’t believe it’s really happening.

Kartik Aaryan: I’ve had those experiences in the past few years, right from when I first came to Mumbai. Shah Rukh (Khan) sir comes out of Mannat every Sunday and I was there at Bandstand to see him along with my college friends because I wanted to be an actor too. It was the first time I saw him, in a car, and I felt like our eyes met. It was a huge fan moment for me.

From that moment till now, to be amongst all these people as a professional and to have my films on the big screen, is all very surreal. It’s surreal that people are buying tickets to watch a film of mine. All these are moments that one just dreams of. I’m from Gwalior and always dreamt of coming to Mumbai and becoming an actor. Last year, we shot for a film (Luka Chuppi) in Gwalior. I was actually shooting at a place where I would hang out with my friends, dreaming of being an actor some day. Hearing ‘Lights, camera and action’ at that very place was a very weird feeling for me. Going back to my school as a chief guest for the flag hoisting was another unreal moment.

Imtiaz told The Telegraph that he was talking to both of you about completely different films. What was it about this one that caught your eye?

Sara: Love has always been a relevant conversation. But I think love today has really evolved in what it is. There’s a constant divide internally and externally between striking a balance of love and your career, for instance. It’s something one can relate to in today’s day and age. What you want from within and from outside are, more often than not, not the same. The stronger, more confident and more sure you might seem outwardly, the more unsure and vulnerable you might be on the inside. There are things like this in this film that are very touching.

Love is such a timeless and relatable concept that everybody goes through, and I’m very proud to be a part of a film that showcases how four very different people have interacted with this concept. There’s Leena and Raghu in flashback, and in the present day there’s Zoe and Veer, and all four of them have very different ways in which they feel and express their love, which make this film even more relatable. I don’t think it’s about the time gap or the gender gap between the characters, because love transcends these barriers — it’s a lens through which you see life. And all four of them have a different lens, and each of these lenses affects the others. Zoe and Veer affect each other and so do Leena and Raghu, and somewhere along the way Leena and Raghu’s story affects Zoe. All of these things play into one another and it’s something that most people today will relate to. The youth will relate to Zoe and Veer, and the fast-paced life where this girl wants to do her best at work and an idealistic guy who wants her to come to him fully or not at all. For those who miss the nostalgia of age-old romance and dancing on balconies and scooters, there’s that as well (laughs).

Not to mention, it’s Imtiaz sir — maybe that’s where I should have started. He is the king of this genre; he’s a sub-genre in himself. I think the way he tells stories is beautiful. Romance as a genre has always interested me, and working with Kartik was something I was really keen on. It all came together very well.

Almost every other film that’s being announced these days has either of you in it. What is it that you look for when scripts come your way?

Kartik: It’s always the script and story that excites me. Sometimes, and it’s with a few filmmakers, that you go with the director’s gut. Like I wouldn’t ask for a script from an Imtiaz Ali because I believe in him, have already been a fan and I know that whatever world he creates will be magical — I’d always be a part of his world. But most of the time, it’s the script that’s the deciding factor.

Sara: There’s not one particular thing, you do different films for different reasons. As long as you know why you’re doing and what you’re doing, that’s all that matters. I cannot pretend like I’ve done a film with David sir (Dhawan) and Imtiaz sir for the same reasons, which is not to say one reason is more exciting than the other. I buy into Imtiaz sir’s vision, into the way he tells narratives. I loved the script of Kedarnath and the character I was given. I loved the idea of going on to a dance floor with Ganesh Acharya and doing an Aankh marey or Main toh raste se ja raha tha (in Coolie No. 1). I can’t say which I like more than the other, and that’s the exciting part of my job — I don’t have to pick. I get to live different lives and for someone who’s as giving to my work as I am, I fully give in to what I’m doing. Whether it’s a romantic scene in Himachal Pradesh or going crazy on the dance floor in some studio on the outskirts of Mumbai, I enjoy them both and maybe equally.

Sara, even before this film was announced, you triggered rumours after that appearance on Koffee With Karan where you said you had a crush on Kartik.

Sara: You know, that comment was made in jest. I’ve now understood that comments you make last and stick. It’s been very taxing because you’re trying your very best to be taken seriously and you’re trying to make your mark. It almost dilutes it to go into things that are nobody else’s business. It’s taken me a really long time to understand this. I’ve been very proud to be this boisterous, confident, no-filters person, but it has its downsides and I need to learn when to keep my mouth shut.

Do you remember what your initial impressions of each other were, and where you met?

Sara: I say this to him laughingly very often, but he’s absolutely not what I thought he would be. He is, of course, fun-loving but there’s a very deep side to him. He knows his mind very well and whether it’s the kinds of films he’s chosen to do or whether it’s the personality he exudes very often, he’s deeper than how he comes across the first 25 times that you meet him.

Kartik: It was at the screening of Dhadak where we first met, and it was just a ‘hi’. Koffee With Karan hadn’t aired yet but our first real interaction was at Karan’s Diwali party, on his balcony. So, it was Koffee With Karan followed by ‘balcony of Karan’. (laughs). She’s always been that girl who oozes confidence and she really knows what she’s saying and means it. I really liked that confidence and that was my first impression. She’s another person who’s real and that’s why she connects with a lot of people.

It’s a film about love. How hard is it to date as a celebrity?

Sara: I think it’s as hard or easy as you actually make it. I’m beginning to realise that you’ve got to switch off your brain, otherwise it can get extremely hard. The questions will never end. Is this why someone’s talking to me? Should I be doing this? Is it correct for my image to be seen here? Is it correct for my image to make a comment on this? The more you worry, it’s almost impossible. But if you switch it off and live a little, it’s fine.

Kartik: I also feel the same. You have to be who you are. You don’t have to go by the norms and what people say about what might be correct or wrong. People might say you shouldn’t be in a relationship when you have such a long career ahead. I really don’t get those things. I feel it’s your personal life and you’re working so hard. If you find true love, then why not? It’s the best thing that could happen in your life, with anyone. It is tough though, to actually let go of all those things and be there. Also, it’s tough to find the right person. For me, for example, it’s now tough to understand whether it’s true or false, or is there another reason behind it.