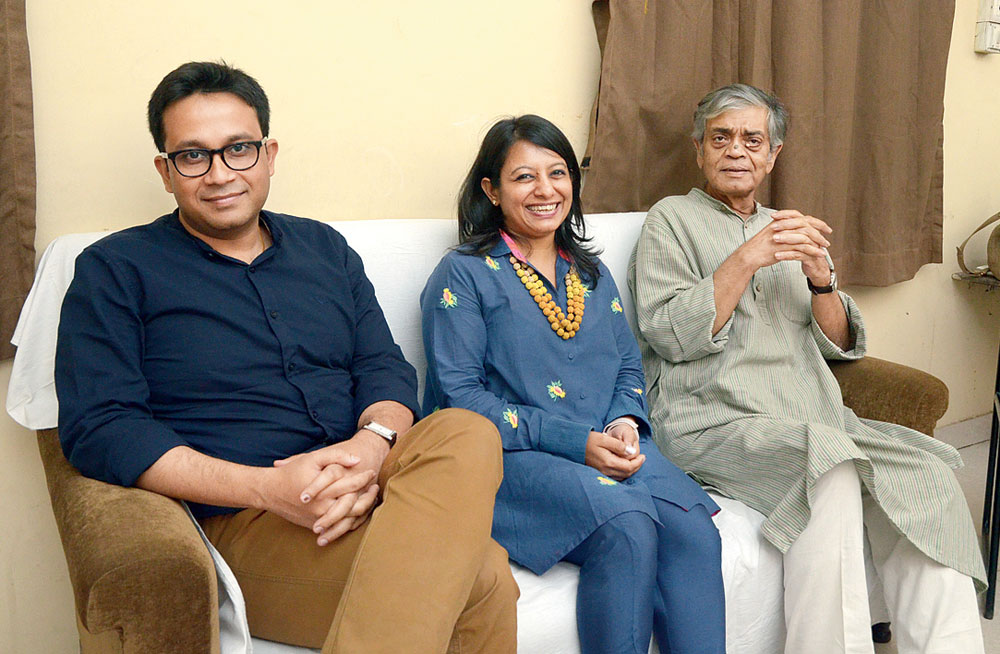 Tell us about this association of Penguin Random House India and the Satyajit Ray Society...

Sandip: We are very happy because Penguin has all of Baba’s books, 95 per cent of his books are with Penguin… all his literary works like Shonku, Feluda. I always wanted a single house to have his entire library, so I am very happy that this thing is happening at last. It has been long overdue.

Niti: We are equally excited and extremely honoured to have got this opportunity. Satyajit Ray is a legend and for us at Penguin, it is a great opportunity to actually create something special for such a cultural icon. That’s why we are calling it the Ray Library.

Niti: That’s right. This year, it’s just the beginning of the association and from next year the vision is to make it much larger. It will bring both the Penguin brand and the Satyajit Ray brand together… it’ll be an annual celebration of everything that his work stood for. We are going to position it as something that people in Calcutta who celebrate him will actually come for, like an event of the year, so that the culture, history, all his works are celebrated and it’s also a great platform for us next year onwards to celebrate the entire Ray Library collection.

What can you tell us about these five unpublished works of Ray?

Sandip: We are planning a Tarinikhuro series and we will definitely do that. We have plans of bringing out a book of interviews and some film articles… he has written many articles and some have been published. We plan to publish the rest of the stuff along with interviews. These can be visual or pictorial books too and that work is in the pipeline… the books will come out next year, maybe end April or early May we can expect one of the publications.

How were these works found now?

Sandip: The search is still going on, to find what’s interesting. There are interesting English articles that have still not come out. But finding the interviews is a big job because there are a whole lot of interviews that we will have to select. There’s some Shonku left, I think…

Any plans of making a film out of these?

Sandip: I am doing a Shonku right now but that hasn’t been translated! It should be translated now. But I won’t say anything about it, I haven’t told anyone anything (laughs). But the shooting part is finished and we are into post-production.

What can the readers expect from these works?

Premanka: I wouldn’t go into the details right now because things are in the making but what I can assure on behalf of Penguin Random House India is that we will offer something that will be a reader’s delight. Anyone who is interested in literature, art or creativity would like to fall upon those books time and again.

So, it’s all about exploring the unexplored, something new… a sense of incessant desire to do something aesthetically evolved. It’ll be a source of inspiration for many people who want to pursue something in literature, art, films or theatre.

Tell us more about The Penguin Ray Library and what plans do you have of preserving and furthering Ray’s legacy?

Premanka: To begin with, we will be curating all the books that we are bringing out, these five books. They will be under The Penguin Ray Library, we thought it’s our way of paying a tribute to the master. We thought that we need to give a very distinguished look in terms of the overall look of the book, the layout. From page one till the end, from cover to cover, everything will be curated and I am consciously using the word ‘curation’ rather than ‘publication’. If we want to pay tribute to Satyajit Ray, then I think the way he used to meticulously plan each and everything, with each book... we will try to represent that ethos, that spirit.

Do you think some of the translated books lose the essence of the original sentiment?

Sandip: Kichhuta toh nischoi, definitely. But the translations are very good, especially those by Gopa (Majumdar) and now Indrani (Majumdar)… they are very good. But you just can’t translate a line like, ‘Oontera ki kaanta bechhe khay?’ This you have to transcreate… actually you have to do it with all of Jatayu’s dialogues!

What new things can we expect with this collaboration each year for The Penguin Satyajit Ray Memorial Lecture?

Which one was your favourite Satyajit Ray book while growing up?