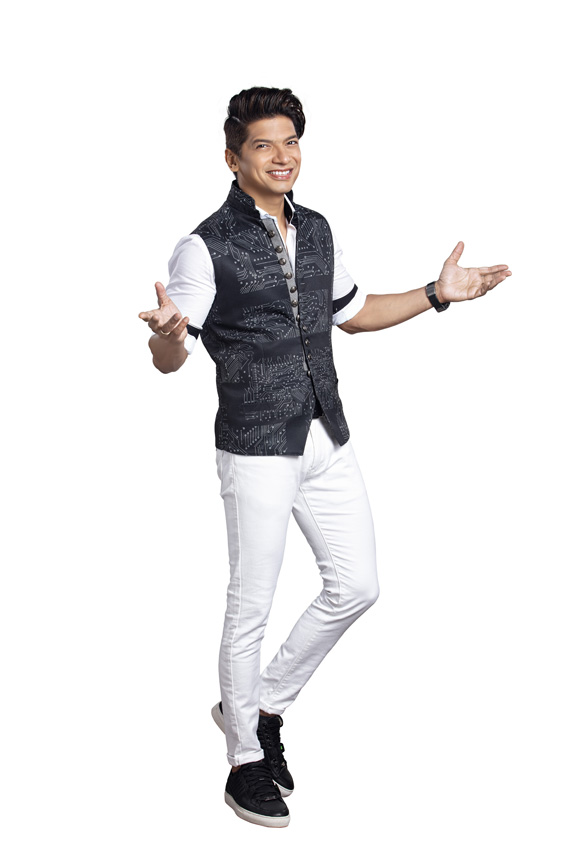 How did you shoot?

For three days, my lunch and dinner timings went for a toss. Shara barite jekhane shekhane light lagiye, camera lagiye, nijei “action” bole shuru hoye jetam. Luckily technology has reached such a level that they (the channel technicians) were checking the framing online. They were literally on Skype with me through the whole shoot. Then we had to send the stuff. Still I had to work towards keeping the energy level high. It was a great feeling to host a show after so many years, mouthing dialogues like “Aap sab se milte hai chhote se break ke baad” or “Aap sabka phir se swagat hai.” It brought back old memories.

Who was in charge of the camera?

I put them (the cameras) up on two stands. You need high-resolution footage so the selfie mode wouldn’t have done. Luckily I have a studio at home. So I have the equipment. Sometime ago, I got some lights too for the fun of it when I came on TikTok. You keep them around the camera and shoot. You get good balanced lighting. There is no shadow. Ektu make-up lagalam (laughs), purono jacket facket ber korlam. Set designer, dress designer, make-up artist, hairstylist, cameraman — I was all rolled into one. The script was theirs, of course. They will now have to edit what I sent.

You recorded a motivational song in Bengali recently for a music video. Was that recorded at home as well?

Amra jeetbo aaj? Yes, my elder son is very good with engineering. My younger son is adept with video recording. Aami atmanirbhar na. Par meri family bahut atmanirbhar hai. Had this lockdown happened three-four years ago, I could not have pulled this off. Neither did I have the studio, nor were my sons capable of help. So I am lucky.

With TV channels mostly on rewind mode, what do you think of this idea of generating fresh content for a show?

Hats off to Zee TV and Essel team. They put in a lot of hard work, getting the job done through phone instructions to each of us. To create brand new programming for 25 hours is a mammoth task. You will hear over 350 performances to mark 25 years of Sa Re Ga Ma Pa. It is the first time something like this will happen on a national GEC. It will be interesting to see if people accept it. Will it become the new normal? I don’t know.

Lots of interesting things are happening. Yesterday, a song got released, composed by Shankar Mahadevan, written by Prasoon Joshi — Jayatu jayatu Bharatam, vasudev kutumbakam — featuring over 200 singers singing in 14 languages under the ISRA (Indian Singers Rights Association) and Sangeet Setu... Each of us did our video. Had the lockdown not happened, such a song could not have been made. It’s creating history, sitting at home.

Palash Sen of Euphoria recently voiced his concern on a social media video post about musicians not being able to hold concerts for many months to come. Does that worry you?

See, there was a time when post and telegraph was a thriving institution. The postmen came home, lakhs of letters got delivered. Things change and we have to be able to adapt to survive. If we sit and complain, it’s over. Today I am doing a lot of online shows. Many guitarists are doing online workshops. People will start paying eventually. How long will they consume music for free? We will start doing home concerts. We will have to figure a way to do it. Halaat hamare haath mein nahin hai ke kab kya ho jaata hai. Today Covid-19 has come. Can someone guarantee another virus will not come ever or there will be no shortage of water or another such calamity? We have to make the best of every situation and stay positive and hope for the best.

Which project was the first you undertook after lockdown?

I have done 15 songs already on coronavirus. And now I’ve decided not to do any more. As much as they are meant to help us, it is becoming an overkill. The song I did in Baaghi 3, Tujhe rab mana — it was such an entertaining film but because of the lockdown it could not do the kind of business it should have — that’s the last film song I did.

Web series is becoming staple viewing material for people at home but, unlike films, they hardly feature any songs. Would the music industry lobby for the addition of music?

There are no rules. When Amitabh Bachchan came to Indian television, who would have thought a superstar would come on TV! The Forgotten Army, a web series by Kabir Khan on Subhas Chandra Bose and his campaign from Singapore, had music by Pritamda. Arijit Singh and I sung in it. Everyone is looking at new avenues and new ideas.

Are you also performing in the concert?

I am doing a medley of three songs. It’s a seven-minute performance. It’s not like aami boring mike dhore gaan gaichhi. We tried to make it as entertaining as possible and shot it like a music video. People should not miss the stage and the glamour. They (the channel) sent a songlist. I did the Baaghi 3 song with my sons — Soham played the piano and my younger son Shubh played the guitar and sang with me.

With India’s longest-running non-fiction franchise Sa Re Ga Ma Pa completing 25 years, Zee TV is tuned up to harness the power of music this weekend to unlock humanity in the fight against Covid-19.

The silver jubilee milestone will be marked by two musical events — a 25-hour fundraiser concert with over 350 performances to be streamed across the Zee family’s social media platforms on Saturday from 9am and a grand concert titled Ek Desh Ek Raag on Sunday, 7pm onwards, in 10 languages to be beamed across 19 Zee channels featuring the best-known faces of Sa Re Ga Ma Pa across regions — Udit Narayan, Richa Sharma, Himesh Reshammiya, Javed Ali, Sourav Ganguly, Vijay Prakash, Kamal Khan and Debojit among others, singing from the confines of their homes.

Viewers will have the opportunity to donate by contributing to Give India, an online donation platform that raises funds for Indian NGOs, through an active ‘Donate’ link during the Sa Re Ga Ma Pa LIVE-athon. Give India is running one of the largest public fundraisers, called the India COVID Response Fund.

With the nation under lockdown, this digital and televised concert was shot in the home of every popular Sa Re Ga Ma Pa face, marking what the channel claims is a “format breakthrough”.

We catch up with Shaan, an integral part of the Sa Re Ga Ma Pa family over the years, who will be hosting the concert as well as perform as one of the billed artistes.

The other star acts

“The platform of Sa Re Ga Ma Pa has always been very special to me as apart from giving our music fraternity some of its finest talent, the show has launched my son Aditya as a host. I was already a part of Sa Re Ga Ma Pa Li’l Champs 2020 this year, but now I am even more thrilled to be a part of the Ek Desh Ek Raag concert… It will truly be a musical treat for one and all, and it will surely help uplift the mood of people across the world during the lockdown.”

“Sa Re Ga Ma Pa has been the most popular and loved musical franchise in India and I am not surprised that it is the first reality show to complete 25 years as it has been at the pinnacle of non-fiction shows since its inception. In fact, I have been associated with the show for more than 15 years, so it is even more special to me and I am honoured to be a part of Ek Desh Ek Raag — a never-heard-before 25-hour LIVE-athon…”