Advertisement
Home / Entertainment / RRS 3 connects the dots for the audience

RRS 3 connects the dots for the audience 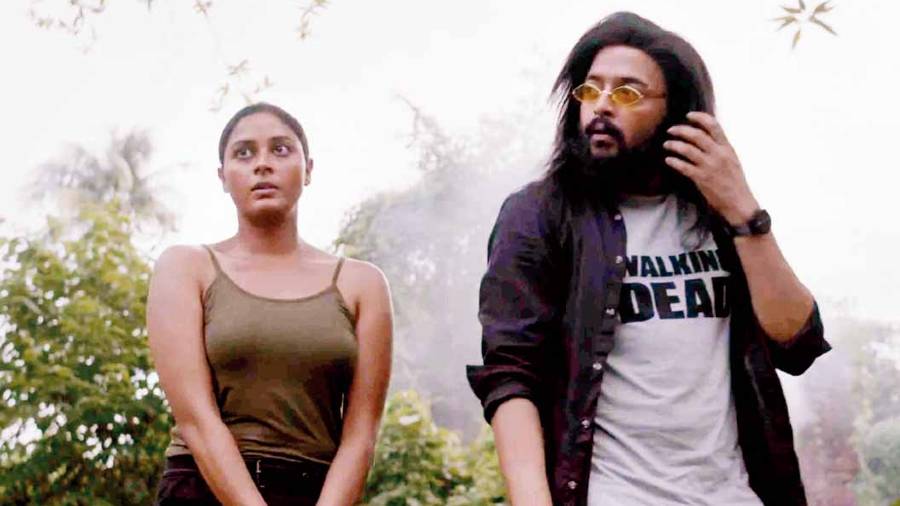 Saoli and Saurav Das in Rahasya Romancha Series 3, which streams on Hoichoi from November 27
Sourced by the correspondent
Arindam Chatterjee   |   Published 26.11.20, 01:41 AM

There is a very positive buzz about Rahasya Romancha Series 3. What are some of the best comments you have come across so far?!

The buzz is surprising and unprecedented. Right after RRS2 released, audiences started to demand a third season all across different social media platforms. We made the third season so soon completely due to the strong public demand. The trailer has been received extremely well and the character ‘Mora’ and his dialogues have gone viral. There are countless memes and tribute videos all over the Internet. A lot of the comments have highlighted that the audiences have never seen a character like this before. The expectations are high.

What was the starting point for RRS3?

Story-wise, as the character Kalo Nekre had received a lot of love in RRS2, I wanted to show her origin story. Also, the story, Shokuni, had been loved by audiences in RRS1 and a lot of audiences had pointed out that they missed Kanchan Mullick and Saayoni Ghosh in RRS2. So, I wanted to do a sequel to that story as well. Like RRS2 focused on the world of Jhontu Motors, RRS3 focuses on the world of Trilok Chokro Somiti, a secret organisation run by a mysterious woman called The Nameless.

How did you decide on which character to bring back from Season 1 and 2?

The world of RRS is full of quirky, interesting characters. I decided to bring back Kanchan Mullick and Saayoni Ghosh’s characters from Season 1 because I felt that their story was kind of incomplete and there is a lot more to be told. Also, there was a lot of room for exploring the activities of the organisation Trilok Chokro Somiti, further. As for Season 2, I felt that though Kalo Nekre was loved by audiences, the character is shrouded in mystery. Also, RRS2 ends with her apparent death. I want the audiences to get to know her better before I can show her fate and move forward. Apart from these returning characters, we have introduced some new characters as it has almost become a tradition to bring in new, quirky characters into the world of RRS. This is where Mora comes in.

Abhirup Ghosh
Sourced by the correspondent

Was it tough for the actors to get back into their characters again during the shoot for RRS 3?

The actors are quite experienced and thorough professionals. Also, I think they love these characters as much as I do. So, they were quite excited to get back to the world of RRS. I make them do really crazy stuff and put them in really difficult circumstances, but they trust me and join the ride without complaints.

What’s the storyline in RRS3?

While the first story shows the origin of the character Kalo Nekre, the second one focuses on a private investigator who suffers from a disorder called Cotard’s Syndrome. This investigator, called Mora, gets entangled with a mysterious organisation called Trilok Chokro Somiti, which runs illegal, underground gambling games of different kinds, in which, players can win huge sums of money by staking their organs, their lives, their souls, etc.

The third story is a direct sequel to the story Shokuni from RRS1. It shows Kanchan Mullick’s character reunite with Saayoni Ghosh’s character to play a new kind of game. After RRS2 released, a lot of audiences demanded that we connect the worlds of Jhontu Motors and Shokuni. RRS3 is a step in that direction. All the characters are gradually coming together. There are certain glimpses of the potential future of RRS in the trailer as well and audiences are no longer calling RRS a series; they have started to call it the Rahasya Romancha Universe.

Saayoni Ghosh in RRS 1
Sourced by the correspondent

What is Kalo Nekre doing in the new season?

Kalo Nekre is doing what she does best. She is obviously killing a lot of people. But, in this season, we also see her journey from being a retired Special Forces officer to being the assassin that she has been shown to be. The character had a steely, almost robotic vibe in RRS2. In RRS3, we have shown the reason behind this.

Saurav Das plays Mora, a character who is suffering from Cotard’s Syndrome. How did you come across this?

While writing Zombiesthaan, I was randomly browsing the Internet to do some research on the undead, when I suddenly came across this disorder. It did not have anything to with zombies so I did not take it seriously. Almost one-and-a-half years later, this June, while writing RRS3, I wanted to introduce a new, interesting character which could live up to the standard set by the other, much- loved characters. That’s when I remembered reading about Cotard’s Syndrome and returned to the topic.

And why did you think a detective with this syndrome will work?

It’s an extremely quirky, unique and interesting character. Something like this has not been done anywhere. Also, the character, though extremely odd, has a tragic human quality about him which people are definitely going to be able to connect with. Mora is not just a quirky character. It is our tribute to every person out there who has been rejected by the society and labelled as ‘Pagla*****.’

Detectives usually are extremely sharp, quick-witted, ready with repartees; they are active. It seems Mora is just the opposite. Why this turn?

Mora is all of the above. It’s just that he thinks he is dead. This gives him a dark sense of humour. He finds joy in morbid places. Death is a celebration to him. While his emotions are numb and movements slow, the only thing that makes this dead man come alive is a good mystery. An effective intellectual challenge temporarily distracts Mora from focusing on death.

What are the new things you discovered about actors like Saurav, Saoli, Saayoni and Kanchan?

Saoli used to be really nervous and uncomfortable doing action scenes during the shoot of RRS2. This time, I realised that she has become completely chilled out about action sequences and her body language has become much cooler. Saayoni does not act as The Nameless; she embodies and lives the character completely. She is super cool in this season and has some really amazing moments as the larger-than-life super villain. Kanchan Mullick was super excited to be back playing Shokuni. His character is an audience favourite and he has played it to the galleries. I think people are going to love him in this season. This was the first time I worked with Saurav Das. He has a terrific surprise element in his performance and adds something special to every shot he gives. Also, he is very passionate and goes to extreme lengths to make a moment outstanding.

RRS3 has some nice action scenes too. How do you set up cool action scenes? How much of it relies on inventive lighting, lensing and editing?

The infrastructure for action is not that great in Bengal unfortunately. There are budget issues as well. Also, we shot RRS3 during this ongoing pandemic. So, things were extra challenging. Instead of going big, we have used a different approach to action in this season. There are smart, crisp, yet, highly stylised action pieces that show the efficiency and expertise of Kalo Nekre. Also, as there is a revenge angle involved in the plot, there is a lot of emotion involved in the action this season. Inventive lighting, lensing and editing have obviously played very important roles in delivering some really cool action moments, so have the sound design and music.